Monument with ‘Palestine’ replacing Israel was hidden from Obama 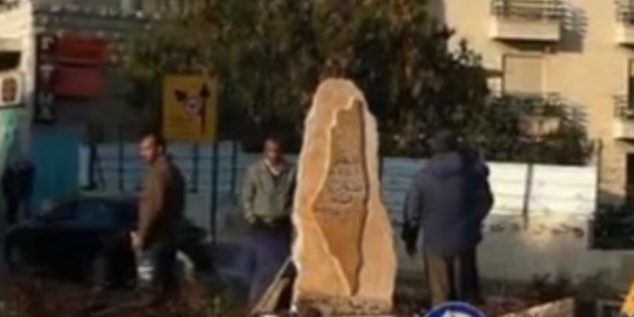 By ELHANA MILLER, TIMES OF ISRAEL—

The municipality of Bethlehem removed a monument depicting the Palestinian state as covering the entire area from the Jordan River to the Mediterranean Sea ahead of US President Barack Obama’s visit to the city last Friday, Palestinian Media Watch revealed on Sunday.

Obama’s route into the city would have taken him past the monument, called “The State Monument,” and said to show the “State of Palestine,” PMW said. The model of “Palestine” also includes all of Israel, thereby erasing it completely, the watchdog group noted.

The Palestinian Authority daily Al-Hayat Al-Jadidah first reported the removal of the map — commemorating the successful UN bid for non-member status last November, and “the outbreak of the glorious revolution” in 1965, a reference to the first PLO/Fatah terror attack against Israel – on March 19. Obama visited the Church of the Nativity in Bethlehem three days later.

“It seems that in the city, there are those who not only welcome the visit of the American President, but are willing to go even further,” the article read, disapprovingly.

“Residents were surprised to find that a model of the map of Palestine engraved with details about the Nakba and an olive tree were removed from the Al-Karkafa Square, to be replaced by a model of what was described as a peace dove. This enraged many people who gathered there.”

The following day, Bethlehem Mayor Vera Baboun and Bethlehem Governor Abdul Fattah Hamail held a press conference, claiming that the monument was removed in order to place a new monument of a peace dove next to it, representing “the Palestinian people’s pursuit of freedom and peace.”

Governor Hamail denied that the move had anything to do with Obama’s visit, and rejected the idea that the monument, in Palestinian Authority-controlled Bethlehem, had been shifted in a bid to mask the map’s effective removal of the state of Israel. “Everyone knows that Americans do not dictate any Palestinian decisions,” Al-Hayat Al-Jadidah quoted him as saying.

Fatah activist Mundhir Amirah was not convinced. He told the Al-Quds daily that the moment he got word of the map’s removal, after Obama’s visit, he headed to the area with regional Fatah secretary Youssef Al-Aref, forcing the municipality workers to reinstate it and reinforcing the monument with concrete.

“We sent a letter to the mayor stressing our utter rejection of this move,” Amirah told Al-Quds.

A recent study carried out on Israeli and Palestinian textbooks found that 96% of maps in Palestinian schoolbooks do not acknowledge the state of Israel.

In 2008, before his first election, Obama criticized maps that anticipate a world without Israel, calling them a threat to Israel’s security, PMW noted.