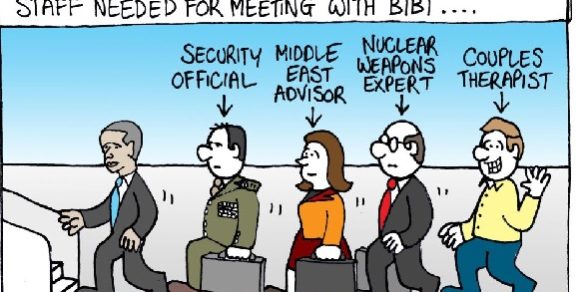 On Monday, the 33rd Knesset approved the government that was finally forged by Prime Minister Benjamin Netanyahu. Some politicians were rejoicing, others seething with resentment. But all were considering the arrangements for and implications of U.S. President Barack Obama’s imminent arrival in Jerusalem on Wednesday.

The King David Hotel has been brimming with activity, getting dozens of suites ready for the “royal” entourage; the 15,000-strong police detail is gearing up to guard against security breaches; streets and highways are being cleared of cars and closed off; the foreign press is descending en masse from all corners of the globe and provided space in which to set up their computers, microphones, and cameras; the local media have been promoting the coverage they will devote to the hot event; menus are being planned, speeches crafted, and the newly crowned Miss Israel — an immigrant from Ethiopia — is excitedly awaiting the gala dinner at President Shimon Peres’ house, where she will be introduced to her counterpart, Mr. America.

And all this is in spite of Obama’s decision not to address the Knesset. Indeed, he claimed that the purpose of this trip was to “connect with the people.”

To this end, the U.S. Embassy in Tel Aviv invited college students from around the country to submit essays on why they should be selected to attend the president’s large-scale “meet and greet” at the Jerusalem Convention Center. Given Obama’s insistence on being surrounded by sycophants, one can only imagine the syrupy content of the chosen applications. One can also figure out why Ariel University students were told they may not enter the competition.

This was a classic Obama “twofer”: asserting that he does not consider the “large settlement bloc” of Ariel as part of the state of Israel, while reminding his Israeli hosts that no hint of criticism may cross his path for the duration of his stay.

Now, Obama is used to having the Jews in his pocket, financially and electorally, regardless of the background noise about his attitude towards Israel. And even his Republican opponents have proven to be more of a nuisance than a threat.

What he has not yet experienced first-hand is the sight and sound of Arab displeasure with his policies — certainly not from those radicals to whom he has been “reaching out.” But he will have the opportunity on Thursday, when he goes to Ramallah for a “meet and greet” with the residents of the Palestinian Authority.

There, too, much preparation has been underway for the arrival of the president of the United States.

On Monday, for instance, protesters went on a rampage in Bethlehem, tearing down, spray-painting with swastikas, stomping on and burning Obama banners. Scores of others swarmed Manger Square, where they threw shoes at an American diplomatic car that was there to secure the area ahead of the president’s visit. (In the Muslim-Arab world, throwing shoes is the ultimate insult — an expression of contempt.)

Undoubtedly, this will be the ministry dealing with what PA President Mahmud Abbas considers a “top priority” of Obama’s visit: securing the release of more than 1,000 terrorists incarcerated in Israeli prisons.

Another, no less important, matter on Abbas’ mind is money. Secretary of State John Kerry said last month that he was going to deliver $700 million to the PA during the Obama trip. Talking to reporters on Friday, State Department spokeswoman Victoria Nuland explained that “an economically viable Palestinian Authority is in the interest not only of the Palestinians themselves but of regional peace and security.” Does this mean that if they get the cash, they will buy new Nikes instead of hurling the ones they’re already wearing?

The answer lies in the creative chants that have been filling the air of Bethlehem and Ramallah in anticipation of Obama’s appearance.

“America is the head of the snake!”

“We won’t receive Obama with flowers and a red carpet; we want to tell America that we hate you and you have no place here!”

“Allahu akbar! Obama is not welcome in Palestine!”

There is no greater irony than that which eludes Obama himself. The leader whose jaw locks at the mere mention of Netanyahu is about to be sucker-punched by Abbas. No good can come of this, of course. But comic relief is a crucial staple of Jewish survival. With Obama in the White House, it’s a gift that keeps on giving.

Ruthie Blum is the author of “To Hell in a Handbasket: Carter, Obama, and the ‘Arab Spring.'”