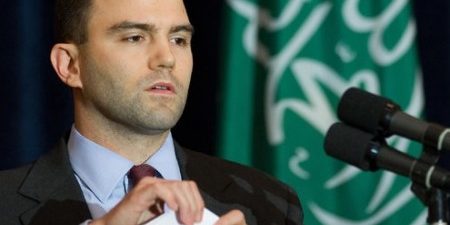 The New York Times published a front page story on Saturday, March 16th lauding Benjamin J. Rhodes, President Obama’s “35-year old deputy national security adviser with a soft voice, strong opinions and a reputation around the White House as the man who channels Mr. Obama on foreign policy.” Rhodes successfully led the charge to persuade Obama to throw Egyptian President Hosni Mubarak under the bus and to intervene militarily in Libya to help topple Muammar el-Qadaffi.  Now Rhodes is shaping President Obama’s public charm offensive that will be on display during his visit to Israel, the West Bank and Jordan this week.

Secretary of State John Kerry will be joining Obama and Rhodes on the trip, but will play a backseat role.  In Rhodes’s words, Kerry will “be accompanying us” on the trip.

Rhodes is drafting the address Obama intends to deliver to the Israeli people, bypassing the Knesset in favor of connecting directly with the population, particularly the youth.

President Obama “has often spoken to young people,” Rhodes told reporters last Thursday while outlining the agenda for the trip.  “He spoke to young people, for instance, when he traveled to Cairo.  And in this instance, we felt like bringing together an audience of university students from a broad range of partners that our embassy has in Israel would allow him to speak, again, not just to political leadership, who he’ll be meeting with on the trip, but to the Israeli public and Israeli young people.”

Obama will also be visiting with youth in the West Bank after meeting with Palestinian Authority President Abbas and Palestinian Prime Minister Fayyad.

Rhodes said that the speech he is writing for the president to deliver in Israel “will focus on the nature of the ties between the United States and Israel, the broad agenda that we work on together on security, on peace, on economic prosperity.  And I think he’ll have a chance to speak to the future of that relationship, so discussing not just the nature of the challenges that we face today, but where the United States and Israel are working to move together as we head into the future of the 21st century.”

As for other public appearances, Obama will view the Dead Sea Scrolls, which demonstrate, in Rhodes’s words, “the ancient Jewish connection to Israel.”

He will also visit Yad Vashem and, according to Rhodes, “have a chance to lay a wreath and make remarks there, of course, marking the very somber and powerful history of the Holocaust.”   No doubt, there also will be ceremonial gestures and photos of Obama shaking hands with (if not embracing) Israeli Prime Minister Benjamin Netanyahu and Israeli President Shimon Peres.

All of this is very nice, but it is all for public consumption – an Obama charm offensive to assure the Israeli people that he is on their side and to make the Democratic Party Jewish constituency back home happy as well.  However, since Rhodes presumably will “channel” what Obama really thinks about Israel and what he may try to pressure Netanyahu in private to concede to the Palestinians, it is worth examining the positions that Rhodes has advocated in the region.   Don’t expect such a critical assessment from the mainstream media. The New York Times profile of Rhodes was nothing short of a promotion piece, for example.  And aside from its usual pro-Obama bias shared by the other major broadcast networks, CBS News is headed by Benjamin Rhodes’s brother, David Rhodes.

Thus, we will have to fill in some blanks in Benjamin Rhodes’s channeling, starting with President Obama’s June 2009 address to the Muslim world in Cairo that Benjamin Rhodes wrote.  The speech was little more than a whitewashing of Islamist ideology and an apology for the historical wrongs inflicted by the West.  Here are some of Rhodes’s nuggets, as delivered by Obama:   “And throughout history, Islam has demonstrated through words and deeds the  possibilities of religious tolerance and racial equality.”

“More recently, tension has been fed by colonialism that denied rights and opportunities to many Muslims and a Cold War in which Muslim majority countries were too often treated as proxies without regard to their own aspirations. Moreover, the sweeping change brought by modernity and globalization led many Muslims to view the West as hostile to the traditions of Islam.”

Rhodes also managed to include in Obama’s Cairo speech a recitation of the Palestinian victimhood narrative. “For more than 60 years, they’ve endured the pain of dislocation,” Obama told the Muslim world, without mentioning the Palestinians’ own responsibility for rejecting the opportunity for a separate state of their own more than 60 years ago and several times since.  “Many wait in refugee camps in the West Bank and Gaza and neighboring lands for a life of peace and security that they have never been able to lead. They endure the daily humiliations, large and small, that come with occupation.”

When the so-called Arab Spring spread to Egypt, Rhodes urged Obama, according to the New York Times, “to withdraw three decades of American support for President Hosni Mubarak of Egypt.”  The result is an autocratic Islamist government run by former Muslim Brotherhood leader Mohamed Morsi, who three short years ago referred to Jews as “bloodsuckers” and “the descendants of apes and pigs,” and added that “We must never forget, brothers, to nurse our children and grandchildren on hatred for them: for Zionists, for Jews.”

As many as 100,000 Christians have reportedly fled Egypt since the Islamist takeover of the country. A Committee for the Promotion of Virtue and the Prevention of Vice was recently established to protect “Islamic morality.”

According to Moushira Khattab, the former Minister of Family and Population of Egypt as well the Assistant Minister of Foreign Affairs and Vice Chair of the UN Committee on the Rights of the Child, women are facing more intimidation than before the revolution.

“Demonization of women as a sex object has intensified since the revolution,” Ms. Khattab wrote. “Sexual harassment has escalated to terrifying levels. This may be part of an attempt to push women back into their exclusively domestic role.”

Despite Egypt’s slide backwards into an Islamist dictatorship, Rhodes remains convinced that the Obama administration’s abrupt abandonment of America’s long-time ally Mubarak was all worth it.

Channeling President Obama once again, Rhodes told reporters last Thursday that “since the beginning of the Arab Spring, and in his speech in May of 2011, he has made this point that as governments in the region are more responsive to popular opinion and the aspirations of their people, it’s going to change the broader political dynamic in the region.  It’s obviously a good thing that the people of the region are seeking to express themselves politically.”

Of course, Israel is the only true democracy in the region.  It recently held elections which truly reflected the will of its people, including its Arab citizens who have equal voting rights.  Women are able to exercise their right to vote, freedom of speech, and equal access to education and the workplace without the constant fear of harassment that women experience in Egypt and other Muslim countries supposedly liberated by the Arab Spring.   Yet Rhodes said on the eve of President Obama’s trip to Israel that it is the democratic Jewish state which must respond to the popular opinion prevailing in the undemocratic remainder of the region:

Israel, as it makes peace, is going to have to recognize the broader role of public opinion in peacemaking.  In the past, the peace processes with a variety of countries and partners in the region were between Israel and individual leaders.  And as you move towards more democratic, more representative and responsive governments, Israel needs to take into account the changing dynamic and the need to reach out to public opinion across the region as it seeks to make progress on issues like Israeli-Palestinian peace and broader Arab-Israeli peace.

Exactly what Arab governments does Rhodes have in mind that are purportedly moving towards “more democratic, more representative and responsive governments”? Syria is in shambles. Lebanon is under Hezbollah’s control. Jordan and Saudi Arabia are still monarchies, with the latter regime continuing to deny women the right to vote and other basic rights.

Egypt, as noted above, is not a functioning democracy despite its elections. It does not respect the opinion of all of its citizens, including women and Christians in particular, with respect to how they are to be governed by the Islamist regime, or grant them equal rights. It is led by an Islamist who has called for Egyptian children to be nursed on hatred for Jews.

Not that the Egyptians need any convincing to hate Jews. A Pew poll taken in 2011 found that only 2% of Egyptians had a favorable attitude towards Jews in general. That is even less than the favorable rating for Jews among Palestinians in the Palestinian territories, which was 4%.   According to Stratfor Global Intelligence, the “Camp David accords, which form the foundation of Egypt’s peace treaty with Israel, are widely disliked in Egypt, and public opinion toward Israel in general is also hostile.” A 2012 Pew poll indicated that 61% of those polled wanted to annul the treaty.

A solid majority of Palestinians polled in March, 2012 opposed mutual recognition of Israel as the state for the Jewish people and Palestine as the state of the Palestinian people. Hamas, the terrorist organization which controls Gaza and is committed to destroying the Jewish state altogether, is viewed more favorably by many Palestinians than President Mahmoud Abbas and his Palestinian Authority.

In short, it is preposterous to suggest that Israel will get anywhere in achieving a secure peace with the Palestinians, based on a viable two state solution, by following the popular will of Egyptians, Palestinians or other Muslims on the Arab street, whose rage against the Jewish state is manipulated by their leaders in order to hold on to their power.   If President Obama wants to put his vaunted charm offensive to good use, he should turn to his hosts in the West Bank and tell them to stop instilling the culture of hatred and de-legitimization of Israel’s right to exist as a Jewish state in their youth.