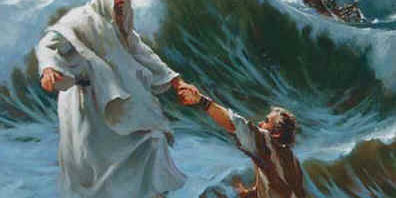 “Humble yourselves under the mighty hand of God, that He may exalt you in due time.” 1 Peter 5:6

Did you hear about the man who was honored by his congregation as the most humble pastor in the country? They even gave him a medal for his accomplishment, but then took it back from him after he actually wore the medal to church. (1)

Humility. It’s a slippery attribute. It’s hard to get and it’s hard to keep. Just ask Peter, the humbled disciple. Anything positive you might find to say about someone would likely describe Peter, one of Jesus’ twelve disciples. Tough, hard-working, popular, commanding, fearless. A casting director’s dream. When others hesitated, Peter slammed the pedal to the metal. A bit impulsive at times, but clearly the undisputed spokesman and unofficial leader of the twelve. A rock for others during unsettling times. But everyone knows that rocks can’t swim.

In Matthew 14 a large rowboat packed with disciples tosses about on the choppy waters of Galilee’s Sea. Believing they had seen a ghost walking on the water close by their boat, the disciples are subsequently relieved to learn that it is Jesus. Inexplicably Peter yells over the wind, “‘Lord, if it is You, command me to come to You on the water.’ So He said, ‘Come.’ And when Peter had come down out of the boat, he walked on the water to go to Jesus. But when he saw that the wind was boisterous, he was afraid; and beginning to sink he cried out, saying, ‘Lord, save me!’ And immediately Jesus stretched out His hand and caught him.”

When Peter began to sink below the dark waves, he might have said any number of things: 1) “Jesus, make me a better swimmer,” 2) “Jesus, how dare you lure me out here where I could drown,” or 3) “Don’t worry about me, Jesus. I’ll be just fine.” It takes a humble man to cry out for help. To admit that he has failed. It takes a humble man to say, “Save me.” But everyone cries out for God during troubled times, right? Actually, many don’t and too many wait until they have settled into the thick mud at the bottom of the sea before asking for his assistance.

Now let’s fast forward briefly to the early morning hours of that day when Jesus faced the cross. A dark hour for him and one of the darkest hours of Peter’s life as well. The Bible tells us in Matthew 26 that three different times Peter denied even knowing Jesus that day, using curse words that hadn’t crossed his lips for years. Fearless, confident Peter—the rock—had surprisingly crumbled into sand. But through his tears and despite his monumental collapse Peter resolved in his heart to call out to the Lord for forgiveness. Very often it is the broken man—the humbled man—that accomplishes great things for God.

Maybe lately you’ve felt yourself going under. Swallow your pride. Think humility. Call out to God and you too can walk on water.