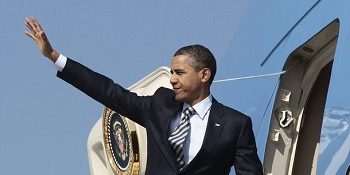 With the U.S. President Barack Obama’s historic visit fast approaching, a preparatory meeting was held on Sunday at the Prime Minister’s Office attended by representatives of both Prime Minister Benjamin Netanyahu and President Shimon Peres, as well as officials from the Foreign Ministry, Defense Ministry, Israel Police, Jerusalem municipality and Ben-Gurion International Airport.

At the meeting, the general outline of Obama’s 48-hour trip was presented. Obama will arrive on Wednesday, March 20 to a reception ceremony at Ben-Gurion International Airport. Following that, Obama will tour an Iron Dome anti-rocket battery site. Then, his hosts will usher him to Jerusalem for a reception ceremony and a meeting with the Israeli president. Also on Wednesday, Obama will hold a press conference with Netanyahu and have dinner with the prime minister.

On the second day of his visit, Obama will visit the Shrine of the Book at the Israel Museum in Jerusalem. He will be shown the Dead Sea Scrolls and an exhibition on innovative technology. Obama will also travel to Ramallah that day to meet with Palestinian Authority President Mahmoud Abbas. Upon his return to Jerusalem that evening, he will deliver an address at the International Convention Center. Then, he will attend an official state dinner at Peres’ residence. Singers David D’Or and Rita are expected to perform at the dinner.

On the final day of his visit, Obama will lay a wreath at the Jerusalem grave of Theodor Herzl, who was the founding father of the Zionist movement. Israeli Ambassador to the U.S. Michael Oren said on Sunday that this symbolic gesture “connects Israel and the father of the idea of a Jewish state to the American people. This is also a vital statement that provides an answer to those who question the legitimacy of the State of Israel.”

“It is important that talks between the prime minister and the president be productive and useful,” Amidror said. “This will be the basis for ongoing work over the next four years. The president and his entourage will see the beautiful land of Israel, as much as the busy time schedule will allow.”

Gil Sheffer, the head of the Prime Minister’s Office, said that the technological exhibit Obama will see boasts Israel’s most recent innovative developments.

Police are preparing unprecedented security arrangements to protect the U.S. president on his visit. Obama will spend much of his time in Jerusalem, where daily life is expected to be affected by the heavy security.

“This is an operation that must be conducted with zero mishaps,” Israel Police Commissioner Yohanan Danino said. “The level of coordination between the different authorities must be perfect.”

Regarding Jerusalem, Danino said “we must minimize as much as possible the impact on daily life in the city through prior planning and public awareness.”

Police have said they will open an information center and provide advanced notice of road closures.