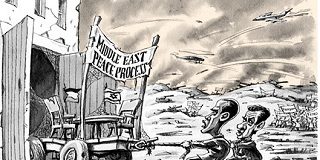 In anticipation of U.S. President Barack Obama visit to Israel at the end of this month, Prime Minister Benjamin Netanyahu is considering a significant package of gestures to the Palestinians, Maariv reports. The security system has submitted to Netanyahu its recommendations for goodwill gestures, with the stated proviso that these would not endanger the PM’s own political future.

Sources in Netanyahu’s circle explained that the gestures are of a political nature, intended to ease the hardships the Palestinian Authority is facing, generating a positive public image for Israel at a relatively low political cost.

A similar package has previously been discussed at least in part in talks between Middle East Quartet envoy Tony Blair and Netanyahu. At the time, the Prime Minister refused these ideas.

One of the gestures in discussion is a specific transfer of land from Area C in the West Bank (which is under full Israeli control) to an Area A status (full Palestinian control). This concerns the transfer of the access roads planned to serve the new city of Rawabi, the first Palestinian planned city under PA rule, near Birzeit and Ramallah, with 10,000 homes, with a population of 40,000. Another road that would be turned over to full Palestinian control serves the industrial park outside Tulkarm.

An additional gesture under review is the approval of master plans for ten Palestinian settlements in the Israeli-controlled Area C. These are all Palestinian neighborhoods which today are considered illegal and concerning which the Civil Administration has issued demolition orders.

If these master plans are approved, these settlements will be connected to the infrastructure and all construction there will be approved.

Two additional gestures are the release of a significant number of Fatah prisoners, arrested before the signing of the Oslo Accords; and the transfer of light ammunition to the Palestinian security forces.

The Israeli political system is expecting that Obama will be pushing to be able to announce the resumption of negotiations between Israel and the Palestinians during his visit to the Middle East. One view holds that the President will only make this announcement in Amman, following his meeting with King Abdullah.

The Prime Minister’s circle fears that Palestinian expectations of the Obama visit are too high, compared to what can be gotten immediately following the renewal of direct talks, especially when those expectations are compared to what the Israeli side is ready to give. In such a case, Palestinian disappointment may result in another deterioration of the security situation.

According to the World Tribune, Obama has demanded a timetable for an Israeli withdrawal from Judea and Samaria.

“Obama has made it clear to Netanyahu that his visit is not about photo-ops, but the business of Iran and a Palestinian state,” a source in the PM’s office told WT. “The implication is that if Israel won’t give him something he can work with, then he’ll act on his own.”

The sources said the White House warned that Obama’s forthcoming visit could characterize U.S. relations with Israel over the next four years. They said Obama aides stressed that Congress, which approved $3.1 billion in military aid to Israel for 2013, supported the establishment of a Palestinian state as a U.S. priority.

“The Obama people are making this a litmus test of Netanyahu’s leadership and credibility,” the Israeli source said. “Obama supporters in Congress have sent Netanyahu a similar message.”

Yori Yanover has been a working journalist since age 17, before he enlisted and worked for Ba’Machane Nachal. Since then he has worked for Israel Shelanu, the US supplement of Yedioth, JCN18.com, USAJewish.com, Lubavitch News Service, Arutz 7 (as DJ on the high seas), and the Grand Street News. He has published two fun books: The Cabalist’s Daughter: A Novel of Practical Messianic Redemption, and How Would God REALLY Vote.