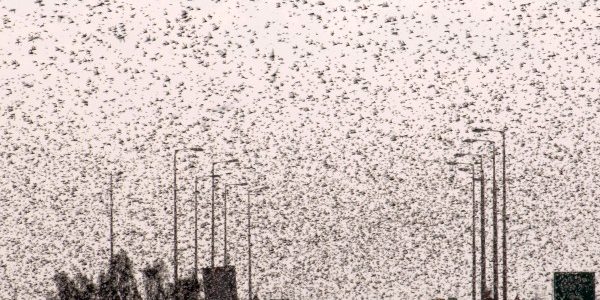 A 1-million strong swarm of locusts that broke away from the plague-sized multitude that continues to attack northern Egypt invaded Israel on Tuesday, only to be stopped in its tracks a day later.

The locusts crossed the Sinai Peninsula into southern Israel overnight Monday. By Wednesday morning it had reached the northern Negev region, blotting out the sky in many areas.

Most Israeli crops were protected, but exposed areas such as potato farms suffered extensive damage. Fortunately, the situation didn’t last long. Israeli authorities immediately began blanketing the entire region with pesticides, both from the air and on the ground.

By Wednesday afternoon, most of the locusts had been killed. But not before many Israelis of Middle Eastern descent scooped up bagfuls of the critters as tasty treats. Going back to biblical times, toasted locust has been a delicacy in the region.

Israel fared much better than Egypt when it came to the locust swarm. New estimates put the swarm that is still in northern Egypt at 50-120 million locusts. On Tuesday, they attacked a large market in Cairo and devastated farms in the Suez region.

Experts predict that shifting winds in the coming days will push the swarm toward Saudi Arabia, where the insects have far less to feed on to sustain their rampage.