The Region: Hand over your property! 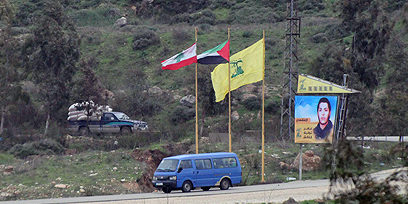 Here’s the perfect parable for understanding not just the contemporary Middle East but the wider world today. So far, it’s only being covered in the Finnish media which, I assume, means nobody outside that country knows about it.

Two unarmed Finnish soldiers assigned to the United Nations Truce Supervision Organization (UNTSO) were observing along the Israel-Syria border from the Syrian side.

While the two Finns didn’t speak Arabic they were quickly made to understand that the men wanted their UN vehicle and their other possessions.

Similar things have happened to Belgian and Italian soldiers in the UNIFIL force in southern Lebanon.

In short, the supposed representatives of the world’s community were being mugged and they could do nothing about it, or at least nothing but to give in.

A Finnish officer explained that the men weren’t in fear of their lives; the gunmen just wanted their property.

Now let me make it clear that I’m not criticizing the two soldiers. What are you going to do when you are unarmed and terrorists with guns hold you up? Yet this little story struck me as incredibly symbolic on several levels.

The world is constantly held up by terrorists and nowadays it tends to give in, if not to the specific operations, than to the narrative being imposed on it. We do see rescue operations sometimes – as in the Algerian army’s disastrous “rescue” in which all the technicians being held hostage at a gas field were killed – and sometimes we don’t, as in Benghazi, while the US government stood by as men it had sent into a dangerous situation were murdered.

Yet what happens is that even if the terrorists don’t always win in their military operations, they succeed in intimidating the West to hand over its intellectual property – by suppressing its own debate – and sometimes to pay tribute money as well.

AS A reward for failing to fulfill its commitments and cheering on terrorist attacks, the UN’s General Assembly assigned non-member state status to the Palestinian Authority. Billions of dollars of US aid go to Pakistan, which helps the Taliban and shields al-Qaida.

Arms are handed over to Syrian Salafists and the Muslim Brotherhood. The Turkish government backs a terrorist group to create a violent confrontation with Israel (the IHH in the Gaza flotilla) and US President Barack Obama declares that regime to be his soul mate.

Even after an official report that Hezbollah carried out a terrorist attack in Bulgaria, the European Union won’t put it on the terrorism list. There is a long list of such items.

Terrorism mugs the West and gets paid off as long as it doesn’t over-reach too much. Not attacking the World Trade Center is enough to make some group America’s “friend.”

One reason the West tends to yield is that it is “unarmed.” Not literally, of course, but unarmed in terms of its ideas, analysis, and understanding.

As for a good case study, take Lebanon, a few miles from where the two Finns were mugged. In 2006 the UN and the US government promised Israel, as a condition for ending its war with Hezbollah, that a muchenlarged UN force would keep Hezbollah in southern Lebanon and help stop arms’ smuggling from Syria to Lebanese terrorists.

Hezbollah has walked all over the UN (UN Resolution 1701) and the US commitments without any cost. UN observers have been regularly intimidated by Hezbollah, which has moved back into southern Lebanon and built new fortifications. See here and here.

THE UN and the White House have not only done nothing but they haven’t even criticized Hezbollah for this behavior.

General Alberto Asarta, the Spanish general who commands UNFIL forces in southern Lebanon, cannot praise Hezbollah enough. The area, he explains, is “the best and most stable in the whole of the Middle East” thanks to Hezbollah’s cooperation. It is “the most successful model when compared to the experiences of other UN peacekeeping missions around the world.”

And Hezbollah has actually helped combat terrorist groups that sought to attack UNIFIL. Indeed, the cooperation with Hezbollah is called – I kid you not – “The Partnership Against Radical Islamic Terrorism.”

Memo to police forces: This could be a model for The Partnership against Crime to be formed in alliance with the mafia.

Did I mention that having won the last Lebanese elections – with a little help from violent intimidation and assassination of opponents – Hezbollah now runs Lebanon? And did I mention that the new CIA Director, John Brennan, is an apologist for Hezbollah and has advocated normalizing relations between the United States and that terrorist group? And, of course, unless hit with an Israeli air attack, Syria and Iran smuggle any weapons into Lebanon they wish without US or UN objection or blockage. The effect of this smuggling is not only to set the stage for future Hezbollah terrorism against Israel and a possible war, but helps to guarantee that Lebanon will continue to be in the hands of a terrorist group that is closely aligned with Tehran and advocates genocide against Jews.

Oh, and Israel is supposed to be the bad guy because it defends itself against muggers.

It’s bad enough to be mugged repeatedly but it’s even worse to provide the weapons and money for the assailants, while also praising them. But that’s precisely the moral of the story as far as Obama Administration policy is concerned: Except for a few exceptions who won’t play nice (ie, al-Qaida) if you’re nice to the terrorists and they’ll be nice to you.

Oh, by the way, this is how most of the “international community” advises Israel to behave.

The writer is director of the Global Research in International Affairs (GLORIA) Center http://www.gloria-center.org.