Herod the Great: Opens in Jerusalem 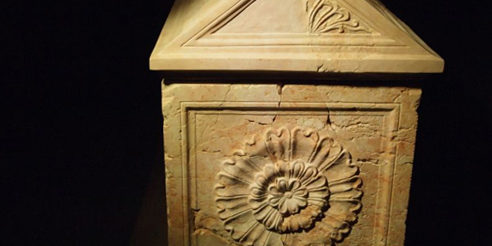 For the first time ever, Herod the Great has become the subject of an extraordinary exhibition at the Israel Museum entitled “The Kings Final Journey”.  The exhibit, which opened to great fanfare yesterday, includes over 250 artifacts collected from the archaeological remains of several buildings and palaces constructed by Herod the Great including pieces from the  Metropolitan Museum of Art in New York.

The display features reconstructions and artifacts from Herod’s edifices at Herodium and Jericho. Starting with his funeral procession of Herod, which began at this third palace in Jericho, the visitor first arrives in Herod’s reconstructed throne room completed with restored frescos. As the visitor walks from room to room within the exhibit he is taken through many of Herod’s major building feats including Caesarea and Masada and artifacts from these sites and others along with digital restorations are on display. However, it is the newly excavated (as believed) Herod’s tomb, which takes center stage. The reddish sarcophagus of Herod, discovered outside the palace at Herodium in 2007, was found shattered in hundreds of pieces and was meticulously restored for the exhibit. It is displayed in the last room of the exhibit, adjacent to the magnificent royal room.

Why did Herold build his tomb on the northeastern slope of Herodium? While no one really knows the answer it is believed that he wanted the tomb to be seen from Jerusalem. As to why it was not within the palace grounds, speculation is that Herod, with his vast knowledge and respect of Jewish culture and its rules regarding impurity, understood that should his tomb be within the palace complex priests would not be able to visit. He therefore constructed the mausoleum on the highest possible spot outside the palace.

The exhibition is dedicated to Prof. Ehud Netzer, a prolific archaeologist who devoted much of his professional career to searching for Herod’s tomb. In fact in 1972, Netzer came within one meter of the tomb’s location during a dig at Herodium. However, it took him another 40 years until he finally discovered the tomb in 2007. Knowing that this find would require a professional restoration team in order to protect and restore the significant artifacts discovered, he conceived the initial idea of Herod’s exhibit and brought in the Israel Museum to assist. Unfortunately, during the initial site tour at Herodium accompanied by members of the Israel Museum’s restoration team, Netzer fell from  the theatre site and died from his injuries three days later. The Israel Museum team, led by co-curators David Mevorah and Silvia Rozenberg, and designed by Iddo Burn, spent the last three years planning the exhibit, which contains over 30 tons of material from Herodium and 250 artifacts from the site and other related sites throughout the region, as well as related artifacts on loan from other museums worldwide.

The exhibit plays tribute to Herod the man and his achievement as a regional imperial ruler with an obligation to be loyal to his imperial mandate with an understanding that he was presiding over a magnificent golden age of Jewish life. According to museum director James Snyder, the exhibit “explodes this moment” of  Jerusalem’s golden age by showcasing the grandeur of buildings constructed by Herod during this period. The exhibit “brings into context remote imperial rule during a pivotal time”, says Snyder. Which is, he explains, why this exhibit is of great interest, not only to Jews but to Christians as well. While Herod the Great may have died four years prior to the birth of Jesus, he ruled during a pivotal period in history, and his death and the subsequent rise of his son and the turmoil which began during his reign, paved the way to early Christianity.

Herod the Great (73/74 BC – 4 BC) in 39/40 BC was appointed the client king of the Roman province of Judaea, consisting of geographical regions of Judea, Samaria and Idumea.

Herod was the second son of Antipater the Idumean, a high-ranked official of Hyrcanus II, and his mother was Cypros who was a Nabatean.

After the conquest of Idumea by John Hyrcanus, all its residents were obliged to convert into Judaism or leave the area. Thus Herod as well followed the Jewish faith, however due to his Idumean blood, religious Jews of Judea did not consider him Jewish.

When Herod was 25, his father appointed him a governor of Galilee, but it was his brother Phasel who governed in Jerusalem. In the middle of the 1st century BC, Hyrcanus’ nephew Antigonus took his uncle’s throne by force. At that time, Herod escaped to Rome to ask for help in bringing him back into power.

Herod with the support of the Romans managed to win the kingdom from Antigonus – the Hasmonean dynasty came to the end giving the way to the Herodian one.

In the Bible, Herod is mentioned as the ruler at the time of Jesus’ birth. “Jesus was born in Bethlehem in Judea, during the time of King Herod” (Matt 2:1) The ruler was so obsessed with the wish of power and domination that when he heard from the Wise Men from the East that they are looking for the newborn King of the Jews, he decided to kill all the babies of Bethlehem and its surroundings.

In the early years of his reign, still before he became a mad man, Herod conducted multiple construction projects; the impressing results can be seen until today.

One of his great architectural achievements was the expansion of the Second Jewish Temple in Jerusalem, which was however tremendously destroyed, as predicted by Jesus, by the Romans in 70 AD.  “Not one stone here will be left on another; every one will be thrown down.” (Mark 13:2)

Other projects of the king include the advancement of water supplies for Jerusalem, imposing fortresses such as Masada or Herodium, founding new cities like Caesarea Martima or expanding the existing ones, e.g. Sebastiya. Herod built also the enclosure over Cave of the Patriarchs (Al-Haram Al-Ibrahimi) in Hebron etc.

Modern scholars commonly agree that Herod had a mental disease which resulted in paranoia and constant depression. As well, after basing their theories on the writings of the ancient historian Josephus, they suppose that in the last days of his life the king suffered from serious gangrene, which he tried to cure in the waters of the Dead Sea.

Herod died in his winter palace in Jericho. While on his deathbed, he became afraid that no one would mourn after his death, so he ordered to execute a large group of important personas, so the feeling of grief and loss would hit the country. However, finally this wish was not carried out.

After his death, Herod’s kingdom was divided between three of his sons. Cesar Augustus appointed Herod Archelaus to rule over Judea, Samaria and Idumea, Herod Philip I to rule the northern part of the kingdom and Herod Antipas to take care of Galilee and Perea districts.

The location of Herod’s tomb is also described in the writings of Josephus Flavius as being at Herodium. Those documents gave a hint to the archaeologist Ehud Netzer, who focused his search in the area atop the tunnels and water pools.

Finally, after decades of search, on 7th of May 2007 the archaeology team of Prof. Netzer  announced the discovery of the sarcophagus with no body inside. Scholars assume that it was destroyed during the first Jewish revolt against Rome (66 – 72 AD) in an act of hatred or revenge towards the tyrannical king. (Likely part of the reason why he had his tomb hidden.) The reddish limestone sarcophagus was found shattered into hundreds of pieces on the floor of the tomb, unlike two other whitish limestone sarcophagi found at the site, which were found broken into many larger size pieces, indicating that they had been dropped.

The mysterious tomb of King Herod and many more interesting findings can be now seen on  display within the temporary exhibition entitled “Herod the Great: The King’s Final Journey Exhibition” in the Israel Museum.

The museum contains an impressive  permanent exhibition of archaeological findings in the Near East, Jewish Life and Art, and an international Fine Arts collection.

The exhibition and its publications was made possible by a grant from the William Davidson Foundation of Detroit. other generous support was provided by Bank Hapoalim, Tel Aviv, Ingelborg and Ira Leon Rennert, New York, the Leon Levy Foundation, the David Berg Foundation, Sara and Avie Arenson and Dr. David and Jemima Jeselsohn.

The temporary exhibition on Herod the Great will remain at the museum through October 5, 2013. The Israel Museum is located in Jerusalem on Ruppin Bldv. and is open:

By Beata Andonia and Elisa Moed for Travelujah-Holy Land Tours, the leading Christian social network focused on travel to the Holy Land. People can learn, plan and share their Holy Land tour and travel experiences on Travelujah.