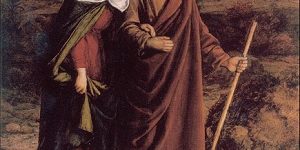 April 2005 brought a shower of blessing to our home, wrapped in a light blue blanket and named Baby Zach.  We had looked forward to this day all our lives and even pictured the day in our minds.  Zach would arrive with a thank you card in hand, telling Stacy how much he appreciated her care of him during all nine months of her pregnancy.  He would shake my hand at the hospital and tell me that he looked forward to obeying all the house rules.  He would promise on our drive home that he would sleep through the night—every night—and that if not, he would change his own diapers for a month.  But things went a wee bit differently.

We all know that babies don’t arrive with thank you cards; promises to keep the rules; or assurances to sleep through the night.  Babies aren’t born sinless or mature.  They are born with a tendency to be ungrateful, disobedient and uncooperative.  We all start out that way.  John certainly did.

John and his older brother James, disciples of Jesus, started out their ministry with the nickname “sons of thunder” (Mark 3:17).  Some of you don’t like thunder because of that time a storm blew down your barn or caused damage to your home.  Personally I love the roll and rumble of thunder.  But although some of you, like me, may enjoy a thunderstorm, I’ve never known anyone who enjoyed tempers in others—folks who bully their way through life and cause wreckage everywhere they go.  But the son of thunder would become the disciple of love.

It wasn’t an easy lesson to learn.  For example, during his early days as a disciple, John became so incensed at one village for refusing to welcome Jesus that visions of falling fire balls of judgment danced in his head.  But people change, and when we see John three years later at the cross, witnessing the agony of Jesus, we might expect to see him calling down those same fireballs on Jesus’ Roman executioners or running around in a wild rage with sword in hand, slashing and attacking anything that moved.

But John had learned the lesson of love, choosing to support the anguished mother of Jesus rather than to cause a scene and blow his top.  Many years later John would write these words to a group of churches, “Beloved, let us love one another, for love is of God and everyone who loves is born of God and knows God.   He who does not love does not know God, for God is love” (1 John 4:7-8).  Tradition tells us that as John grew too weak to walk or even write, he was carried around on a stretcher, gently reminding all who would listen, “Children, love one another.”  Love others and watch your temper melt away.

Further Reading:  1 John 4:7-21
Dr. Daniel McCabe is the pastor of Faith Bible Church in Spring, Texas. He is a contributing editor for The Jerusalem Connection Report. He can be reached via email at danielmccabe@juno.com.