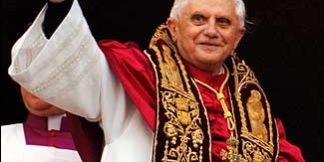 Did Pope Benedict XVI line up his successor and then resign to fulfill a 900-year-old prophecy that the next leader of the Roman Catholic Church would be history’s “final pope?”

The idea was posed by Tom Horn, co-author of the book “Petrus Romanus: The Final Pope is Here.”

As WND reported, Horn and his co-author, Cris Putnam, accurately predicted Benedict would become the first pope in nearly 600 years to resign.

Horn believes the last pope, called “Petrus Romanus” in the prophecy by Irish Archbishop St. Malachy, could be the man who is set to take over interim leadership the moment Benedict resigns Feb. 28 at 8 p.m. local time, becoming the acting Vatican head of state.

The claim centers on Cardinal Tarcisio Pietro (Peter in English) Evasio Bertone, born in Romano Canavese, Piedmont, the current secretary of state for the Vatican, who Pope Benedict XVI appointed Camerlengo, or Chamberlain, of the Holy Roman Church April 4, 2007.

In the period known as “sede vacante,” when there is no sitting pope, Bertone will be called upon as Camerlengo to serve as the head of the Roman Catholic Church.

He will be in charge until the College of Cardinals attending the upcoming Papal Conclave in the Sistine Chapel select a new pope.

Did Benedict choose his successor?

Benedict XVI has made decisions that indicate Bertone could be, or at least once was, his choice for successor, Horn told WND.

Working alongside Bertone, Benedict appeared to be “stacking the deck” in Bertone’s favor Jan. 6, 2012, when he named 22 new cardinals. Most are Europeans, primarily Italians, already holding key Vatican positions.

As a result, Europeans currently number over half of all cardinal-electors, 67 out of 125. Nearly a quarter of all voters in the conclave will be Italian.

“When he appointed these new cardinals,” Horn said, “Benedict seemed to put his definitive stamp on an Italian successor, stacking the College of Cardinals, those who could be called upon to give Bertone the so-called apostolic chair of St. Peter.”

Horn said the idea was not Benedict’s alone.

Most Vatican experts attribute the large number of Italian appointments to the influence of Bertone, he said.

WND sources in Rome close to the Vatican previously suggested Benedict may have resigned in part because he wanted to have a hand, even if indirect, in influencing the selection of his successor.

The sources further argue that by selecting “Benedict” as his papal name, Cardinal Josef Ratzinger, though not a priest of the Benedictine Order, sought to identify his papacy with Malachy’s prohecy that the next-to-last pope would be identified by the epithet Gloria olivae, translated as “Glory of the Olive,” knowing the Benedictine Order is associated by tradition with olives.