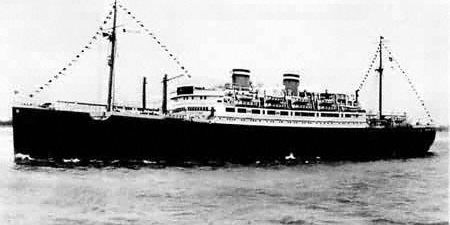 Nahum Goldmann, a leading Zionist, founder and longtime president of the World Jewish Congress, wrote in his autobiography the following:   “We must stand as a generation, not only condemned to witness the destruction of a third of our number but guilty of having accepted it without any resistance worthy of the name.”

He was referring to the years before and during the calamity that overtook the Jews in the 20th century: the Holocaust.

We have to remember, in particular, the timorous American Jewish response to the appalling torment of the 907 Jews on board the St. Louis in the summer of 1939. Here were Jewish refugees from Hitler’s Germany desperate to be allowed into the United States, but refused permission by the Roosevelt Administration.

Everyone knew that this spelled a death warrant for the men, women and children on board that German ship, and yet their fellow Jews in America did not take to the streets in protest at Franklin Delano Roosevelt’s harsh and implacable refusal to give the Jews sanctuary in America.

They did not demonstrate nor march on the White House. They allowed the ship to return to Hamburg and seal the passengers’ fate.  True, there was anti-Semitism in America, but that should not have stopped American Jews. For most of the Jews in America, life went on, they attended parties, dinners and balls; all this while Jews in Europe were already falling under the German Nazi juggernaut of death.

Have things changed in American Jewry? It would seem that under another Democrat president, this one called Barack Hussein Obama, far too many American Jews are similarly complacent and even apathetic towards the perils that loom for another six million plus Jews; the Jewish population of the reconstituted Jewish state. After all, a vast majority of American Jews tragically voted for Obama not once, but twice.   Under Obama, the number of Jews in the media and in politics who astonishingly support the demonstrably anti-Israel policies and attitudes of Obama are a source of shame.

The Hagel nomination is the nexus between Obama’s world view and Chuck Hagel’s nomination as Secretary of Defense.  Hagel’s views on international affairs and foreign policy are even further to the left than those demonstrated by the leftist John Kerry, who has just been confirmed as the next U.S. Secretary of State and who may himself inflict great damage upon Israel.   Hagel’s senatorial record is replete with an anti-Israel ideology. He was one of only two senators to oppose standing with Israel against Islamic terrorism. And it was this lamentable and problematic record in the Senate, which predictably attracted the president who saw in Hagel a willing executioner of his own radical world view – especially towards Israel.

Here then is Hagel, who not only has expressed troubling comments about Israel, but who is ready to do his master’s bidding in dangerously diminishing America’s nuclear and conventional military deterrence – and who is opposed to any military steps to negate Iran’s nuclear weapons threat. Hagel does not believe in Reagan’s aphorism, “Peace through Strength.”

Hagel and Obama are joined at the hip. Their adage is, “Jaw, jaw, not war, war.” And by so saying and acting, America’s Islamic foes lose all fear of a militarily strong United States and are immensely emboldened to wreak greater and greater havoc throughout the world, and in particular upon U.S. allies; the most loyal being Israel.   Need proof? Listen to the mullahs in Iran.

From the mullah’s perspective and that of the Iranian president, Ahmadinejad, they have every reason to celebrate Chuck Hagel’s nomination, because they know that with Obama and Hagel – and more than likely, Kerry – no credible attempt will be made to prevent Iran from obtaining nuclear weapons. And who will be the target for those WMDs? None other than the Jewish state of Israel.  And this brings me to the Jewish member of the Senatorial confirmation committee charged with voting for or against the Hagel nomination.

Sen. Chuck Schumer of New York, a Jewish American who styles himself and acts as Israel’s “guardian” on Capitol Hill, has already voted for Kerry and may well vote for Hagel. This despite all the evidence presented of Hagel’s less than friendly attitude towards the Jewish state and to Jews. Schumer thus has learned nothing from the lamentable record of that earlier Jewish generation in the 1930’s and 1940’s.

Then we have the American Israel Public Affairs Committee (AIPAC), which has remained deafeningly and shamefully silent. It appears to be demonstrating the same timorousness of those Jewish organizations during that other Democrat Administration; that of FDR.

To its undying shame, AIPAC leaves the moral high ground to the non-Jewish and primarily Republican members of the confirmation committee, good decent folks like Senator Rubio and Senator Cruz among others.   Then there are the noble pro-Israel organizations, Christians United for Israel (CUFI) and the Republican Jewish Coalition (RJC), which have led public opposition to Hagel’s nomination.

Jewish Democrat politicians on the other hand, like so many liberal Jews in America, have sublimated their Jewish faith to the 21st century Hellenistic religion of Liberalism. Not surprisingly, the problematic Hagel ingratiated himself with that anti-Israel group, which falsely masquerades as a supporter of Israel and which cozies up to Barack Hussein Obama: J-Street.

The question then remains. Is this present Jewish American generation, with honorable exceptions, no different and no better than that which failed to protest mightily against the Holocaust and the indifference of the allies and which earned Nahum Goldmann’s searing rebuke?   The Chuck Schumers, Thomas Friedmans, et al, should hearken to the words of the poet, Edward Yashinsky, who survived the Holocaust but later died in a Communist prison:   “Fear not your enemies, for they can only kill you. Fear not your friends, for they can only betray you. Fear only the indifferent, who permit the killers and betrayers to walk safely on the earth.”   And from the Torah: “Do not stand idly by while your brother’s blood is spilled.” Leviticus, 19:16.