After hating Israel, nothing in common 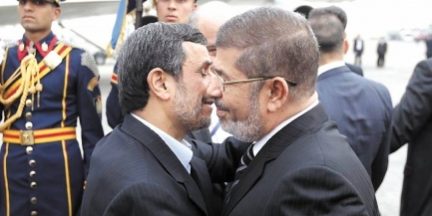 Iranian President Mahmoud Ahamadinejad’s visit to Cairo on Tuesday started off on the wrong foot. The visitor recited his usual hateful and hostile invective against Israel to Egypt’s citizens, but they preferred instead to press Ahmadinejad on Syria, where Iran is supporting its ally President Bashar al-Assad while he slaughters the Syrian people. And so Ahmadinejad’s hosts throughout the day leveled harsh criticism against him — some of it embarrassing — concerning the negative role of Iran in Syria, but also against Iran’s subversive behavior against the Gulf oil emirates and Saudi Arabia. Then there was criticism as well on Iranian efforts to wield influence in Iraq. It’s not surprising that someone tried to physically attack the Iranian president during his visit to one of Cairo’s mosques.

Ahmadinejad’s host, Egyptian President and Muslim Brotherhood member Mohammed Morsi, doesn’t try to conceal his criticism of and hostility toward Israel. Morsi is part of a movement that Shiites consider either a rival or outright enemy. Morsi identifies with Sunni Muslims throughout the Muslim world in their struggle against Shiite Iran and its allies, whether in Syria, Iraq or the Persian Gulf.

Following the recent wave of unrest in Egypt, Morsi better understood the importance of the special relationship between Cairo and Washington. After all, Egypt’s ability to feed 86 million hungry mouths depends on both America’s goodwill and the depth of its pockets. Morsi also knows to safeguard the relationship and coordination between Egyptian and Israeli security forces. In short, Ahmadinejad discovered in Egypt’s presidential palace a Mubarak with a beard, as Morsi’s staunch critics have dubbed the current Egyptian president.

Morsi has his own political considerations, and he was wise to invite Ahmadinejad to participate in the Organization of Islamic Cooperation summit, taking place in the Egyptian capital. But apart from mutual resentment of Israel, the two leaders can’t reach an agreement on anything else. The two nations have failed to renew full diplomatic ties, which have been severed since 1979 when Egypt moved to make peace with Israel.

This visit to Egypt was Ahmadinejad’s swan song. He will disappear from our lives in the next couple of months, following the Iranian elections this June. Even in Tehran they understand that media stunts are not a substitute for real statesmanship. Although it may be appropriate to be concerned that a better skilled and more sophisticated leader will replace Ahmadinejad, still, the divide between Shiite Iran and the Sunni Arab world, led by Egypt, remains wider than ever.