Can Jewish groups speak out on Hagel? 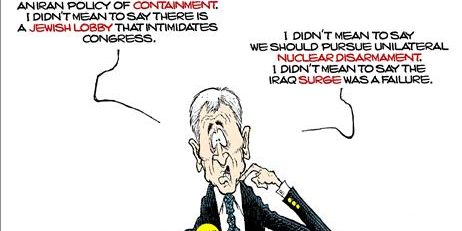 One of the interesting subtexts about the debate over the nomination of Chuck Hagel to be secretary of defense has been the relative silence from the organized Jewish world. Though there was widespread shock from most pro-Israel activists, even those who were loyal liberal Democrats, about the president’s decision to choose one of the least Israel-friendly members of the U.S. Senate in the last generation to run the Pentagon, none of the major groups, aside from the Zionist Organization of America, spoke up publicly about his unsuitability for the post or his out-of-the mainstream views.

The reasons for this silence were obvious to anyone who understands their missions and how they operate. The refusal of the major Jewish organizations was rooted in their natural reluctance to embroil themselves in fights they think would hamper their ability to do their jobs. But at this juncture in the Hagel saga, after the nominee flopped at his Senate confirmation hearing and demonstrated how insincere his conversion from being tough on Israel and soft on Iran to a garden-variety backer of the Jewish state, it is time for them to reconsider. Though the odds still favor his confirmation, and with some senators, including Chuck Schumer and Claire McCaskill, citing their silence for their support for the nominee, the rationale of the organized Jewish world for staying out of this contretemps has evaporated.

Groups like the Anti-Defamation League, the American Jewish Committee or even AIPAC are not in the business of involving themselves in partisan fights. Nor are they interested in futile gestures that embroil them in squabbles that would make it more difficult for them to gain access to decision makers. These are things that often infuriate people who rail at them for not being representative of ordinary Jews or being “self-appointed” leaders. But these are generally unfair criticisms.

All Jewish groups in this country are voluntary associations. If the heads of these groups are not elected by a broad cross-section of the community it is only because most Jews don’t take the trouble to get involved with these organizations. We can argue about whether many of the so-called “major” groups still perform any vital functions. Indeed, many of them are vestigial remnants that have long ceased having any rationale other than institutional inertia. Others are mere partisan fronts for the political parties or Jewish surrogates for other liberal causes. Many are merely fundraising outlets for various causes. But some do still perform vital tasks, like compiling data about anti-Semitism or advocacy on behalf of Israel, and don’t deserve all of the scorn that is thrown in their direction.

However, the Hagel nomination illustrated that groups that see themselves as above politics can’t entirely avoid some fights. The nomination of a person who has publicly bragged about his standing up to the “Jewish lobby” and opposed sanctions or even the threat of using force against Iran should have crossed the line between something that merely raised eyebrows and battle that needed to be fought.

Some of the major organizations, or at least their leading donors, are dyed-in the-wool Democrats who would never put themselves in direct opposition to the president. Yet even those who were privately upset about Hagel reasoned that the campaign to stop Hagel was doomed. After abandoning Susan Rice, his preferred candidate for the State Department, there was good reason to believe that President Obama would fight harder for his “soul mate” at Defense. A popular president whose party has a majority in the Senate is not liable to lose such a nomination fight, so they thought it made more sense to shut up about Hagel and retain their access than to fight and lose.

This was a not unreasonable conclusion, but it was also a self-fulfilling prophecy. While many Jewish leaders were hoping that Hagel could be stopped without their help, by their very silence they gave cover to pro-Israel Democrats who decided that avoiding giving offense to the president took precedent over defending their principles. On this point, Schumer, whose announcement of public support for the nominee seemed to take all the drama out of the confirmation battle, has been quite candid, as he has explained that it was impossible for him to fight Hagel while Jewish groups kept their own counsel.

But my expectation that Schumer’s move would more or less end the controversy was confounded by Hagel’s catastrophic performance at his Senate confirmation hearing on Thursday. At this point even those who have no problem with Hagel’s troubling positions are grappling with the fact that the president’s choice has given the appearance of incompetence and an inability to articulate the president’s stated positions on the issues.

It was assumed that Hagel’s confirmation conversion to positions that affirmed the alliance with Israel and hostility to Hamas, Hezbollah and Iran would be done in such a manner as to at least quiet concerns about his transformation from foe to friend of the pro-Israel community. But at his hearing, Hagel was not just unprepared; the insincerity of his flip-flops was transparent. He refused to admit that he was wrong to refuse to vote to designate the Iranian Revolutionary Guards as a terrorist group. Nor did he disavow his slanders about Israel’s conduct during the 2006 Lebanon War. And he could not give a straight answer as to his views about containment of Iran even when given three tries to do so.

At this moment, when even partisan Democrats are expressing their discomfort about Hagel, it is time for the major Jewish groups to, at the very least, express their belief that the nomination should be reconsidered. They needn’t issue an outright call for a no vote on his confirmation or directly fight the president. But they can speak out about the problematic nature of what Hagel said at his hearing and whether the president ought to think twice about insisting on shoving him down the throat of an obviously troubled Democratic caucus.

Doing so would involve some risk and cause them to be criticized by some Democratic partisans. But as they already know, the only people who are actually enthusiastic about Hagel are those, like the vicious Israel-basher MJ Rosenberg, who think the nominee is lying about changing his views about Israel and Iran.

Let’s also dispense with the notion that if Jewish groups speak out on Hagel, they will be confirming the myth that the “Israel Lobby” is an all-powerful force that, as the nominee said, “intimidates” Congress into doing “stupid things.” It is true that that is what some foes of Israel will say if Hagel loses. But the truth is they are already saying it and the vast majority of Americans—who are the backbone of the bipartisan consensus in support of Israel—reject these slanders. The question now is whether an advocate of those views, even one who has now disavowed some of that statement, albeit in a manner that lacks all credibility, will be elevated to one of the highest positions in the government.

Whatever it was that Hagel has been telling Democrats like Schumer or even the big Jewish groups who got a private meeting with the nominee, no one who watched that hearing can seriously believe his protestations of a change of heart. Though he may still be confirmed if the president goes to the mat for him, the outcome is by no means certain. That means this is a moment when the major Jewish groups must drop their reticence and speak truth courageously to power.

Though it is often wise for such groups to stay out of fights with the White House, this is not the moment for such caution. Were the major groups to call for a reconsideration of his nomination, it could be the tipping point in the debate. Should they fail to find their voices now about Hagel, many of the good people inside these organizations may have reason to look back with regret on their decisions. Hagel’s appointment raises genuine doubts about this administration’s commitment to stopping Iran’s nuclear threat and continued support of Israel at a time when its enemies (such as the Muslim Brotherhood government in Egypt) are gaining strength. Silence at such a moment is impossible for men and women of conscience.