Alone in the new Middle East 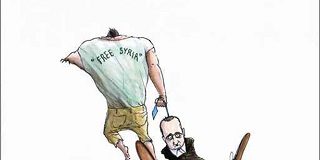 You can’t say this came as a surprise. From the moment that the uprising in Syria started in Daraa in mid-March 2011, Israel was concerned. We knew that the situation in Syria was difficult and complex. There are no angels on either side of the conflict there. We also knew that the regime of Bashar al-Assad possessed chemical weapons that could fall into dangerous hands. And we were aware of the presence of al-Qaida and Hezbollah operatives in Syria. We were again faced with a lesser of two evils.

But the worries have not been only ours. Just as in Jerusalem, governments in Amman, Ankara, Beirut and the capitals of the Gulf states have monitored with great concern the bloody events taking place in Syria, which has turned into a powder keg in an already flammable Middle East. Great alarm has also been felt in Washington and European capitals. The problem has been that while in Syria they have been counting the dead, in the West they have only been counting statements of condemnation.

“There is a consensus among all nations of the free world that chemical weapons falling into hands of extremists and Hezbollah must be prevented,” Vice Prime Minister and Regional Cooperation Minister Silvan Shalom said on Sunday, adding that U.S. President Barack Obama had said that such a scenario could not be permitted. Such a nightmare scenario would bring about a dramatic change in the balance of power in the Middle East and harm the stability of the region, if it is even possible to say such stability exists, given what has happened since the start of the “Arab Spring.”

In our global village, chemical weapons falling into the hands of terrorist groups would destabilize the entire world. The big question is what needs to be done to prevent this.

It is tempting to think, as some did on Sunday, that this is all post-election political spin by the Israeli government, a use of worrying regional security developments to prompt a quicker coalition assembly process. But in Syria, as in Egypt, the danger of chaos is real and just across the border. For the world, the situation in Syria is concerning. For Israel, it is terrifying, due to geographical proximity.

Even Assad’s closest ally, Russia, admitted on Sunday that Syrian dictator’s chances of survival are shrinking daily. Russian Prime Minister Dmitry Medvedev said this in an interview on CNN, showing that even Moscow is losing faith in Assad.

Israel and Turkey find themselves in the same boat, just like old times. Patriot missile batteries are deployed in both countries. We are far from the days in which Turkish Prime Minister Recep Tayyip Erdoğan served as a mediator between Jerusalem and Damascus. We are also far from the days (just two years ago) in which Turkey and Iran conducted an illogical love affair with each other. The Syrian threat could even cause Israel and Turkey, historically allies, to forget the Gaza flotilla incident.

France’s current military campaign in Mali shows how unwilling the world is to use force. France is conducting the campaign almost alone in its backyard in western Africa. France has its own interests which required it to go to war against al-Qaida terrorists in the Arab Maghreb.

But France, which received Syria in the Sykes–Picot Agreement of 1916, won’t be in a hurry to open yet another front. The British also won’t rush to act in Syria. Obama, the leader of the world’s only superpower, has committed to act, but who can promise that the U.S. will actually speedily move to open up a front in Syria? It is a matter of geographical distance, or even worse, Obama’s world view.

The Al-Arabiya news network interpreted Obama’s second inaugural address last week as a desire on his part to engage mainly in domestic issues. The Obama administration has other plans and Syria can wait, according to this analysis. At most, Al-Arabiyeh opined, the U.S. government would provide only political and moral support in the Syria situation.

There is a global consensus that chemical weapons falling into the hands of terrorists would be a casus belli. But the way in which the enlightened world has cried from afar over the massacres in Syria does not promise that this consensus will lead to real action. By the way, on Jan. 11, U.S. Chairman of the Joint Chiefs of Staff Gen. Martin Dempsey said that the American government and the international community were not capable of preventing Assad from using his chemical weapons. This is not to mention what would happen if terrorist groups had those weapons. How promising.