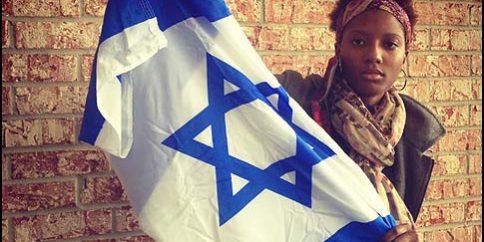 The University of New Orleans has nearly 13,000 undergraduate students, fewer than 100 of whom are Jewish.  There are no Jewish studies courses, there are no Jewish services available and there is no kosher food available on campus.  But what UNO does have is Chloe’ Simone Valdary.

Valdary, a sophomore, majors in international relations.  Her particular interests are history, religion, philosophy, politics and current events.  Although she is Christian, Valdary decided to write a major paper her freshman year on the Arab-Israeli conflict.

The research she did for her paper alarmed her, and Valdary resolved to do what she could to fight Jew-hatred.  She created an organization on Campus, “Allies of Israel.”  There are currently only nine members of the group, but the membership is likely to soar soon.  Their first major event will be held on January 28.

For their kickoff event Valdary chose to aim high.  She contacted Dr. Daniel Pipes, the executive director of the Middle East Forum, and one of the best known and respected authorities on the Middle East and radical Islam.  To the delight of the Allies, Pipes agreed to be the keynote speaker at their upcoming Declare Your Freedom event, which she describes as a “pro-Israel, pro-America event.”

The goal of this project, Valdary told The Jewish Press, is to publicly express a pro-Israel position, but also to talk about how to combat anti-Semitism in innovative ways.  She has a number of ideas she is already working on which she believes will have a real impact on the widespread hatred of which she only recently became aware.

In an announcement for the January 28 event, Chloe wrote:

In ‘The Town Beyond the Wall,’ author Elie Wiesel writes, “…to be indifferent, for whatever reason, is to deny not only the validity of existence, but also its beauty. Betray, and you are a man; torture your neighbor, you’re still a man. Evil is human, weakness is human; indifference is not.” I was moved by these words when I first read them during my freshman year in college. It was this writing along with the Scriptures and other sources that inspire me to try to inhibit this great injustice, Jew hatred, if you haven’t guessed it, that is permeating the globe.

Pipes will talk about the threats Israel faces which non-Israelis and non-public officials can act against.  Such as, Valdary said, “the delegitimization of the state as made evident through such campaigns as BDS.”

There is no formal Jewish organization such as Hillel at the University of New Orleans, but the Allies of Israel has a faculty advisor and several area rabbis and Chabad leaders have become involved with the group, which was formed with aid provided by CAMERA’s Campus Activist Project (CCAP).  CAMERA is the Committee for Accuracy in Middle East Reporting in America.

Not only is Valdary an unlikely Zionist activist because she is not Jewish, she is also African American.

So how did a nice non-Jewish New Orleans girl like her become focused on the Jewish world?  Valdary said it happened because she read – and loved – the Leon Uris book “Exodus,” the summer before she started college.  That book inspired her to write the in-depth research paper on the Arab-Israeli conflict in her spring semester.  As she tells it, the research opened her eyes and she became increasingly intrigued “by the level of anti-Semitism that facilitates the conflict.” She then decided to explore the conflict in the context of the constructivist paradigm of international relations which looks at norms and ideas and value systems.  It was through this research that I really began to discover how much anti-Semitism permeates the Middle East, and it really began to terrify me because many people are unaware of this phenomenon.  It is a distant one that doesn’t much affect us here in the USA and that distance often dissuades people from getting involved.

Okay, but how is it that this non-Jewish, non-white young woman found the question of hatred against Jews so compelling?

Her answer sounds like something that should come from a much, much older person.  But older doesn’t always mean wiser, and this 19-year-old has much to teach her elders.

She told The Jewish Press that she admires the Jewish community because “it is the Torah and Jewish values that have built the bedrock of Western civilization which is a fact that is too often understated.”  Her family, she said, is very supportive of her efforts.  In fact, it is to her parents that she points in ultimately explaining her commitment to Israel.  Valdary said, “I think I acquired my love for Israel and my desire to speak up for good from the values my parents instilled within me at an early age.”

Valdary ends the announcement for the January 28 event with, “‘We must,’” as Lincoln stated, “have faith that right makes might; and in that faith, let us to the end, dare to do our duty.”   Wow.  With focus and fortitude like that, Israel’s allies are greatly strengthened by the likes of Chloe’ Simone Valdary.

To find out more about the Declaration of Freedom event at the University of New Orleans, go to:

https://www.facebook.com/events/261801583945496/?ref=ts&fref=ts
Lori Lowenthal Marcus is the US correspondent for The Jewish Press.