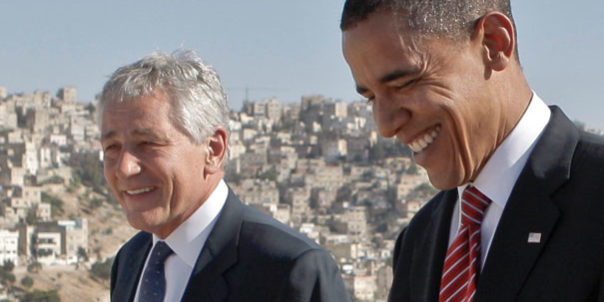 Chuck Hagel told the Lincoln Journal Star this week there wasn’t “one shred of evidence that anti-Israeli.” President Obama’s nominee to be secretary of defense claimed the criticism of his record and statements on both Israel and Iran is nothing but “falsehoods and distortions.”

That’s a message that is being taken up with gusto by Hagel’s defenders on the news talks shows this week. In particular, some of those who are fighting for his confirmation are taking the position that not only is Hagel pro-Israel but that those who have criticized his positions are in fact a noisy, extremist minority that doesn’t speak for American interests or those of American Jewry, or even the people of Israel.

This is a nasty piece of business that was best exemplified by journalist Carl Bernstein who, during an appearance on MSNBC’s “Morning Joe” program Tuesday, denounced Hagel’s critics as “Likud” supporters that didn’t speak for American Jews like him.

Bernstein’s diatribe in which he claimed the prime minister of Israel also didn’t speak for Israel was then praised effusively by fellow guest Zbigniew Brzezinski, whose own reputation as a bitter critic of Israel seemingly gave him the authority to decide what is and isn’t pro-Israel (something that could perhaps only happen on a show hosted by his daughter).

Bernstein—a typical example of a public figure who only cites his Jewish heritage so as to enable him to bash supporters of Israel—has as little authority to speak on the subject as Brzezinski, but his comments go to the heart of the effort to push back at criticism of Hagel. The point here isn’t really about false accusations, since Hagel’s opposition to Iran sanctions or the use of force to stop its nuclear program as well as his boasts about standing up to the “Jewish lobby” are a matter of record.

The issue here is one more attempt by Israel’s critics to change the terms of discussion on the issue, in order to make those who are outside the national consensus on the U.S.-Israel alliance appear to be mainstream thinkers while those who support it are castigated as extremists.

Let’s first dispense with the disingenuous nature of the defense of Hagel as being a mainstream backer of Israel. During his time in the Senate, the outspoken Nebraskan made no secret of the fact that he did not wish to be seen as part of the bipartisan consensus on Israel. That was the whole point behind his refusal to sign letters on anti-Semitism and terrorism that virtually every other member of the Senate supported.

It was also the whole point behind his now-famous rant recorded by Aaron David Miller in which he bragged that unlike his colleagues he was one politician who wasn’t intimidated by the “Jewish lobby.”

Hagel was always one of those members of Congress who would couch any expression of support for Israel in words that made it clear that he disdained the decisions of its democratically-elected government (where it was run by Likud or its opponents) and that it needed to be saved from itself by forcing it to make concessions to its enemies that the people of the Jewish state believe to be unwise, if not suicidal.

Nor is there any point trying to spin his long opposition to sanctions or force against Iran or Syria, or his advocacy for outreach to Hamas and Hezbollah as just another way of being a backer of Israel.

These are not mainstream positions. Nor do they require much courage since advocating anything that smacks of opposition to the pro-Israel consensus or talk about the “Jewish lobby” is bound to generate applause among the chattering classes and the liberal media, where resentment of Israel’s popularity is widespread.

Chuck Hagel does not publicly advocate Israel’s destruction, but there is more to the issue than this. To be pro-Israel one needn’t be a fan of Israeli Prime Minister Netanyahu or of his hapless political opponents.

But Americans who purport to care about Israel’s fate do need to respect its democratic process and understand that the idea that Americans have the right to override the judgment of the voters there is illegitimate.

Israel, like any democracy, especially one that is still besieged by its enemies, has plenty of problems. But it does not need to be saved from itself, especially by those, like Hagel, who have long demonstrated little sympathy with its security dilemmas or alarm about the existential threats facing it.

People like Bernstein who claim that respect for the stands of Netanyahu’s coalition—which commands the support of a far larger share of Israel’s voters than President Obama won here in 2008 or 2012—is not consistent with supporting Israel are way out of line.

So, too, are their attempts to brand the overwhelming majority of Americans who think Israel’s government deserves U.S. support as a conspiracy of neoconservatives and others who don’t speak for the best interest of this country or the Jewish community.

The failure of 20 years of peace processing and concessions to the Palestinians effectively destroyed the Israeli left. That is why Netanyahu is poised to be re-elected later this month with a coalition that is more right-wing than his last government. That may dismay many Americans, but they need to understand that it is the result of Israelis looking at the facts and drawing the inevitable conclusions from them.

Unfortunately, many Americans prefer to ignore the reality of the Middle East. Such dreamers who insist on blaming Israel for the lack of peace can call themselves what they like, but that does not allow them to pose as the country’s ardent friends the way Hagel and his fans are trying to.

Hagel is a decorated veteran and a loyal supporter of President Obama. Those are both good reasons for him to sit in the president’s cabinet. But his views on Israel and Iran don’t mesh with the public positions of the president or most Americans. No amount of rhetorical overkill or disingenuous attacks on the pro-Israel community can disguise this fact.

Nor can they transform him from the proud opponent of the “Jewish lobby” into the Jewish state’s friend.