The insanity of a two state solution 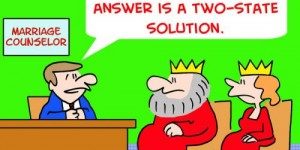 The phrase “Two State Solution” in referring to the Israel-Palestinian conflict has been embraced by politicians and journalists alike, repeated endlessly, and touted as the panacea for a “just and equitable” solution to the dispute. But it is based on erroneous geography and history; on a mixture of wishful thinking, naiveté and a brilliant Arab propaganda campaign of disinformation and falsehood.

It has sullied the minds of powerful elements within some liberal Christian churches and has become the repository of anti-Israel sentiment in the Left. To understand why political correctness has usurped historical correctness, perhaps a small but vital chapter of Middle Eastern history would not go amiss.

Shortly after the conclusion of the First World War and the total defeat of the Turkish Ottoman Empire, which had ruled most of the Middle East for 400 years, Britain was made trustee by the League of Nations for the whole of the geographical area known as Mandatory Palestine. Incorporated within the Mandate was the 1917 Balfour Declaration, which specifically referred to the historical connections of the Jewish people with the geographical territory known as Palestine and to the moral validity of reconstituting within it the Jewish National Home.

The British Mandatory power, however, arbitrarily tore away 80% of the Palestine Mandate in 1921 – some 35,000 square miles – giving it to the Hashemites, a Bedouin tribe with links to Mecca. And in 1923, the Golan Heights was similarly torn away from the Mandatory and given to French controlled Syria. Now only the land west of the River Jordan, a mere 10,000 square miles, from the river to the sea, remained from the original territory promised to the Jewish people as a National Home.

Jewish residency was immediately forbidden in all the lands east of the River Jordan, which in time became known as Trans-Jordan and later as the Kingdom of Jordan. This odious policy of Arab imposed apartheid remains today just as it does within the Palestinian Authority.

The U.N. Partition Plan of 1947 created two states, Jewish and Arab, which were roughly equal in size. But these two states were to occupy only the remaining western geographical area of Mandatory Palestine – from the Mediterranean Sea to the River Jordan – barely 40 miles wide and a mere 20% of what now remained of Mandatory Palestine.

This plan was accepted by the Jewish leadership with deep reservations but as a pragmatic solution to the plight of the 850,000 plus Jewish refugees who were being driven from Arab lands at the time of Israel’s rebirth and as a refuge for the remnant of European Jewry who survived the Holocaust. The Arabs rejected it outright. Then as now, they wanted no Jewish state to exist.

The State of Israel, reconstituted in part of its ancient and biblical homeland in May, 1948, was immediately invaded by seven Arab armies whose aim was to completely destroy it and drive the surviving Jews into the sea. Tragically many of the Arabs living in the territory chose in the main to foolishly listen to the blandishments of their masters in the Arab League who told them to leave so that the Arab armies could defeat the fledgling Jewish state and they could return to slaughter the Jews.

So they left, but the Jews resisted Muslim genocide and lived to rebuild their ancient Jewish homeland. The Arabs who believed the cajoleries of their masters were then cruelly forced by their fellow Arabs to live in camps and refused any chance of becoming citizens of Jordan or Syria or any of the many Arab states throughout the Middle East or North Africa.

The Jordanian Arab Legion, led by British officers, invaded and occupied the eastern half of Jerusalem along with Judea and Samaria (the so-called West Bank), driving the Jews out of their towns and villages and from the ancient Jewish quarter in Jerusalem’s Old City. In the south, the Egyptians invaded and occupied the Gaza Strip, similarly driving the Jews from their homes.

In April, 2009, the Holocaust denying leader of the Palestinian Authority, Mahmoud Abbas, and Israel’s supposed peace-partner rejected any willingness to accept Israel as a Jewish state; a sure indication of the falsity of any so-called Palestinian Arab claim to live in full and lasting peace with Israel.

He has repeatedly abrogated all the previously negotiated peace negotiations with Israel by going direct to the ever immoral United Nations General Assembly and predictably gaining non-state observer recognition status from the combined 57 member Muslim bloc, the assorted leftist regimes and a cowardly European Union: in direct violation of the now meaningless Oslo and Camp David Accords.

The creation of a Palestinian Arab state within the mere 40 miles separating the Mediterranean and the Jordan River is a recipe for war and for the piecemeal destruction of the Jewish state. Such an Arab state will more than likely fall under the control of the Islamist Hamas movement, which as part of the Muslim Brotherhood seeks a worldwide Islamic Caliphate. Gaza, and what it has become, is living proof of Palestinian Arab genocidal intentions towards Israel.

Israel will again be reduced to a nation a mere nine miles wide at its most populous region; what were known as the Auschwitz borders. When President Bush was still Governor of Texas he flew over Israel’s tiny width and remarked, “…why, in my state we have driveways longer than that.”

Today, some 400,000 Jews live in liberated areas of Judea and Samaria, the so-called West Bank, and are condemned by a deluded world for building homes in parts of the territory or in Jerusalem, north and south. The Jewish communities in Judea and Samaria are termed “settlements” when in fact they are villages and towns built upon the very ancient Jewish sites mentioned in the Bible.

After all, a people who undeniably claim native patrimony in Jewish Judea and Samaria cannot be called “settlers” or “occupiers” in their own ancestral homeland.

Victor Sharpe is a freelance writer and author of several books including the trilogy, Politicide: The attempted murder of the Jewish state.