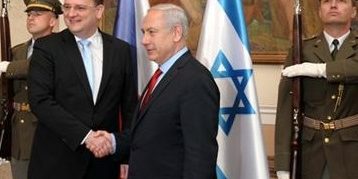 Sixty-five years ago, on November 29, 1947, the UN General Assembly (UNGA) voted to partition Palestine into Arab and Jewish states and on that same day in 2012 the Palestinians pushed UNGA to resurrect the very state they refused to accept in 1947, simply because it would have meant accepting a Jewish state as well.  This time, however, the vote was to accept Palestine at the UN with the status of a Non-Member Observer State.  An overwhelming majority – 138 out of 193 countries – voted yes, while only nine countries rejected the Palestine gambit, including the U.S., Canada, and the Czech Republic.  The Czechs, in 1947 (as the former Czechoslovakia) and now, voted with the Jewish State.

The Czech Republic was the only member of the European Union (EU) to vote with Israel and the U.S., and has had, through the years, a warm and friendly relationship with both the U.S. and Israel, albeit, not during the Communist interval when it was compelled to join the Soviet Bloc in displaying hostility toward Israel and America.  Thomas Masaryk, the first Czechoslovak president of this organic democratic nation that incorporates Bohemia and Moravia, was a lifelong friend of the Jews, and a supporter of the Zionist movement and of the Jewish state.  Masaryk was the first head of state to visit British Palestine in 1927.  In recognition of this friendship, Israel has honored Masaryk by naming a village after him as well as streets in their major cities.

Czechoslovakia (previously part of the Austro-Hungarian Empire) emerged after WWI as a stable, independent democratic state, one of the few truly democratic states in an otherwise authoritarian Europe.  Its leaders, Thomas Masaryk and Eduard Benes, were progressive leaders who advanced the socio-economic condition of the diverse country, enabling Jews to live and thrive in post-World War I Czechoslovakia.  Jews drew increasingly closer to the state as Hitler rose to power in neighboring Germany, and all Jewish groups in Czechoslovakia supported their country’s stand against Nazism.

For Czechs, the Munich Pact is among the most formative events which helped to shape their understanding of world affairs.  In 1938, Czechoslovakia was forced to cede a significant part of its territory to Hitler’s Germany, after Great Britain and France signed a pact with Germany and Italy.  The fact that two great powers betrayed a small state in the middle of Europe in order to placate the aggressive Nazi regime left the Czechs with a feeling of having been betrayed and abandoned.  The comparison can be made today regarding Israel and its feeling of isolation and betrayal by the EU states, especially by Britain and France, who seek to placate the triumphalist Arab/Muslim world.

During Israel’s War of Independence (1948-49) Czechoslovak military support for the nascent Jewish state in defiance of a UN embargo was crucial to Israel’s survival.  The Czechs trained Israeli pilots and sold Israel aircraft they desperately needed.  Former Czech Ambassador to Israel, Michael Zantovsky was quoted as saying, “Many Israelis still remember the role that Czechoslovakia played during the War of Independence in 1948, with its supplies of arms and planes.” And, in recent years, Czech pilots have trained in Israel’s Negev desert, which has helped prepare them for conditions in Afghanistan.

Hosting Israel’s Prime Minister Benjamin Netanyahu in Prague last May, Czech Prime Minister Petr Necas, compared Israel’s situation to that of Czechoslovakia in the 1930’s.  “We have got a special feeling for Israel’s situation – that of a small nation surrounded by enemies. We remember our situation in the 1930s, when the small democratic Czechoslovakia had neighbors that wanted to destroy it or take part of our territory.”

At a joint press conference with the Czech PM, Netanyahu stated that he “deeply appreciated Prague’s friendship,” and added that “nowhere else in Europe are Israeli calls so well understood.”  PM Necas pointed out during the press conference that his government “fundamentally rejects delegitimization and any boycott of the State of Israel.” He added, “We clearly support Israel’s right to defense against terrorist attacks.”

The entry of the former Soviet Bloc countries into the EU in 2004 brought a new perspective that came out of their experience with totalitarian communism.  These countries, especially the Czech Republic, did not have the post-colonial syndrome.  The Czechs and Poles were not as willing to appease and reconcile with authoritarian Arab regimes.  Czech independence in the early 1990’s enabled them to change course, and good relations with Israel became symbolic of their independent foreign policy.  Czechs have been much more understanding of Israel’s position in dealing with its hostile Arab neighbors and Islamist terror.  Unlike Western Europe, Poland and the Czech Republic do not have large Muslim minorities that apply political pressure on their governments.

During the Second Lebanon War in the summer of 2006, the Czech Republic separated itself from the EU position, which demanded an immediate ceasefire between Israel and the Hezbollah terrorist group.  The Czechs argued that Israel had the right to defend itself. Similarly, during the Cast Lead winter operation of 2008-9, the Czech Republic was one of the few EU states that did not condemn the Israeli entry into Gaza.  The Czech Republic held the European Council presidency at the time, and its failure to criticize Israel was admonished by its European partners.

Just prior to the end of the Czech Republic presidency, the Czechs set out to organize an EU-Israel summit with the goal of upgrading the EU’s relations with the Jewish State.  The summit was cancelled due to the objections of some EU states who claimed that closer relations with Israel could only come with progress in the Peace Process. The fact that the Palestinians rejected direct negotiations with Israel or a permanent peace settlement has not been lost on the Czechs.  Having experienced British and French duplicity and hypocrisy in the late 1930’s, the special relationship between the Czech Republic and the Jewish state remains stronger than ever.

At a recent (November 25, 2012) pro-Israel demonstration in Prague organized by the League Against Anti-Semitism, there were banners that read, “Gaza murderers are killing, and Israel has a right to defend itself.” Other banners read, “Free Gaza from Hamas” and “Israel you are not alone, Israel we love you.”  Roman Joch, a former advisor for international affairs and human rights to the Czech prime minister who participated in the rally said, “When Israel withdrew from the Gaza Strip years ago, it was a time when they could start up a new nation-state. But they don’t want their own state. Their goal is to annihilate and destroy Israel as a Jewish state. Israel gave them land with prosperity and in great condition. And Gaza could be a pearl of the Middle East. But they don’t want it.”

Israel’s Prime Minister Benjamin Netanyahu paid a special visit to the Czech Republic earlier this month to personally thank the Czechs for voting against the Palestinian Non-Member Observer State Status at the UN.  Netanyahu called the Czech Republic “Israel’s best friend in Europe,” and he expressed his belief that the relationship will go even deeper.