Democrats speak out against Hagel as Flournoy’s star rises 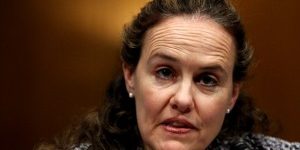 Since the Anti-Defamation League this morning told Right Turn that potential defense secretary Chuck Hagel has made statements that “border on anti-Semitism,” Democratic lawmakers are speaking out and there is renewed interest in another contender, whose selection would also allay women’s groups complaining about the all-male lineup for second-term top Cabinet posts.

Rep. Shelley Berkley (D- Nev.) issued a blistering statement:
“From his lack of support for policies to isolate Iran going back to 2001 to his calls for the U.S. to directly negotiate with Hamas terrorists, I’m troubled by former U.S. Senator Chuck Hagel’s tarnished record on Middle East policies.  This includes his votes against tougher sanctions on Libya and Iran, a nation that continues to seek nuclear weapons and to call for Israel’s destruction.  “I would also hope that Former Senator Hagel’s past support for protecting the interests of terrorist groups over the interests of Israel — America’s most reliable ally — would raise red flags.  The bottom line is that Chuck Hagel’s dismal record on issues affecting the Middle East stands in sharp contrast to the stated policies of our nation and he would be the wrong choice for America’s next Secretary of Defense.”

Meanwhile, Sen. Joe Lieberman (I-Conn.) according to his communications director Whitney Phillips, expressed his concerns, although he will retire before any vote is taken.

“He disagrees on Hagel’s stance on economic sanctions, he thinks they do have a place and are useful, if only that sometimes other options are of a military nature. He has also had his disagreements with Hagel on Israel and on such topics as the surge in Iraq,” Phillips told me.

Moreover, one of the prime reasons for Hagel’s support among liberals — his opposition to the Iraq war — has been blemished by recollection he actually supported the war before he opposed it and Republican President George W. Bush. As one foreign policy analyst who has garnered President Obama’s praise in the past put it, “If I were president, I would be plenty worried about having someone who looks after his own political skin first, and is willing to abandon his president in the process.”

Most Democrats are staying mum, preferring to ignore questions for comment and to hope the whole mess goes away. In that vein, another contender for the Pentagon’s top post Michèle Flournoy, the former under secretary of defense for policy, is getting closer attention.

“There is no doubt that the woman knows her business,” said Marie Wilson, the founder of the White House Project, which advocates for women to take on leadership roles in all spheres.

“It’s Defense — the area where we have the slowest movement of women into top positions,” she said. “It would be a breakthrough.”

Obama’s reliance on the votes of women to defeat Mitt Romney raises the pressure on him to do more than seriously consider a woman for the top job, said one Democratic strategist.

“All the research we have right now shows that if you want to get a better decision, you want a diverse group,” said Wilson, who added that she has worked with Flournoy on several projects designed to help women take on national security leadership roles.
Ironically conservative critics of the president are also conceding she’d be an easy shoe-in. One such analyst tells me, “Where are the women?  Michele Flournoy is a terrific choice, well respected by the administration, military, Congress, Republicans and Democrats.  And no one has done more to strengthen the US-Israel military relationship than she has while leading the effort for a robust US military strategy in Afghanistan.  Just ask the Israelis about the former and top military analysts about the latter.” He adds,”Best of all her appointment would scare the hell out of Ali Khamenei — by making the military option more credible — and make it more likely (though still not likely) that he would be willing to agree to major concessions at the upcoming talks with the P5+1.”

Sometimes things have a way of working out. The White House, regardless of problems with Hagel, may have been shifting toward Flournoy anyway. And today’s reaction is sure to accelerate that movement.