Bethlehem: A place of refuge and redemption 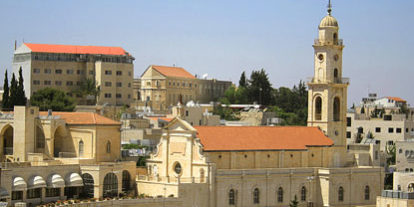 The idea of Bethlehem touches every believer at a primal level. It stirs in us stories of David being called from the sheep flock to shepherd the people of Israel. It reminds us of Christmas carols and plays, nativity scenes and even the roots of our faith.

Interestingly, Bethlehem’s first mention in Scripture involves a nativity – the birth of Benjamin, the progenitor of a clan that became a rival to Bethlehem’s tribe of Judah. No matter. Benjamin came into the world on the road to Bethlehem and his mother, Rachel, who died in childbirth, was provided a tomb which still stands beside the modern city of Bethlehem.

While this story is the first mention of Bethlehem in the Bible, only a few verses in Genesis 35, it does indicate welcome and redemption as Rachel’s tragic death gave birth to the tribe of Benjamin who provided Israel’s first king, Saul.

The book of Ruth develops this theme.

Other than a brief stint in Moab, the account of Ruth and Naomi is a Bethlehem story.

Bethlehem sits on the Patriarchal Highway, a thin green line providing a seam between potentially fertile fields toward the west and the ominous desert on the east. Consequently it provides refuge for shepherds and their flocks – an important part of the Bethlehem story.

This delicate balance also offers good agricultural and pastoral living when the rainfall is good, but life becomes tenuous during drought years when the desert creeps though the village. Naomi and family encountered such a dilemma, as described by the book of Ruth.

Unlike Jerusalemites, Bethlehem residents have a clear view to the mountains of Moab which, sitting higher than Bethlehem, offer hope for better rain. The ample rainfall tends to pool on Moab’s Medeba Plateau, increasing the region’s fertility.

These were likely the considerations of Elimelech, Naomi’s husband, as he decided to move east. The sojourn was probably intended to be a brief one, as Middle Easterners were very loyal to their home village. They did stay long enough for Naomi’s sons to find Moabite wives.

Of course the men in the story don’t survive the first chapter, so Naomi is left alone with her two daughters-in-law.

When Naomi decides to return to Bethlehem, Orpah stays in Moab, but Ruth “clings” (in Hebrew) to Naomi, declaring “Where you go I will go, and where you stay I will stay. Your people will be my people and your God my God.”

Arriving in springtime, Ruth made good on her declaration, going immediately to the barley fields to glean whatever the harvesters left behind. Her loyalty to the older woman was noted by one of Elimelech’s relatives, Boaz – a kinsman-redeemer.

Occurring during the period of the Judges, a time in which “each man did what was right in his own eyes” (according to the book of Judges), her actions must have represented a stark contrast.

Consistent with Bethlehem’s ideals of refuge and redemption, Boaz used his resources and influence to provide for all of Ruth’s and Naomi’s needs, including land and family – considered the greatest assets of Israelite society.

While Bethlehemites are welcoming to peaceful strangers, as illustrated by the story of Ruth, they can fiercely oppose enemies who threaten land and family.

As a result, Ruth’s grandson, Jesse, sent three sons out to stem the Philistine menace which occupied the Eila Valley containing access to the Patriarchal Highway and the vulnerable village of Bethlehem.

Sent out to supply his older brothers in the field, Jesse’s youngest son, David, heard of the threats of Goliath, a Philistine warrior. Having honed his skills as a Bethlehem shepherd on the seam between fertile land and desert, David had met and overcome both bears and lions.

Having secured victory, David is soon opposed by Saul (a tribal rivalry between Judah and Benjamin); but shepherd David, who knew the desert well, was able to escape, outwitting Saul.

In spite of his many travels, due to constant conflict with the Philistines and Saul, David warmly remembered his hometown. Finding refuge in a cave (near Bethlehem according to one tradition), David longed for “a drink of water from the well near the gate of Bethlehem.”

A thousand years later David’s descendants, Mary and Joseph, were prompted to travel from their residence in Nazareth to their ancestral home of Bethlehem to participate in a Roman census.

According to the traditional understanding of their arrival in Bethlehem, they attempted to stay at an inn, a place of lodging, but were told there was no room at the inn. This certainly seems inconsistent with Bethlehem’s value of offering refuge.

Dr. Stephen Pfann, president of the University of the Holy Land, takes issue with that traditional interpretation.

“When Joseph and his pregnant wife Mary made the journey to Bethlehem, they were returning to his ancestral home, the place where his family originated and in which, undoubtedly, some relatives still lived,” according to Pfann.

Consequently, it’s very unlikely the Nazarene couple would have had to pay for lodging, even if an inn existed in a small village like Bethlehem. Jewish law and Middle Eastern hospitality determined it would be a disgrace to let relatives, especially an expectant mother, pay for their stay.

Biblical evidence that both Joseph and Mary had relatives in the area includes Mary’s cousin Elizabeth living in the Judean hill country and John the Baptist’s Judean ministry.

“Relatives from other towns were welcomed by the patriarch of the extended family and brought under his protection during their stay in his village,” Pfann explains.

Joseph and Mary would have been welcomed into the guest room, which was already partially occupied by other relatives in Bethlehem for the census.

Such a crowded room would not have been an appropriate place to give birth.

Hence, some of the women would have helpfully ushered Mary to the privacy of the basement or cave storeroom to complete her labor.

Pfann’s argument is further bolstered by Luke’s use of the Greek word kataluma in the Nativity story. The word’s only other appearance in Scripture is in Luke 22:12, in which Jesus orders the disciples to prepare an upper room (kataluma) or guestroom for the Last Supper. Pfann is convinced “guestroom” is the accurate translation for kataluma in the Christmas narrative as well.

(Luke’s word for “inn” is pandakeion and is found in the story of the Good Samaritan . That word has been incorporated into modern Hebrew and Arabic, meaning “roadside diner” and “hotel” respectively.) “Kataluma refers to the place where people recline – like the Upper Room. It’s a kind of guestroom. The kataluma is never used to mean an overnight room for rent,” according to Pfann, who holds a Ph.D from Hebrew University in Ancient Semitic Languages.

Expanding his argument, Pfann explains, “The architecture of the family home both today and in antiquity made provision for the occasional guest. The most common dwelling was the courtyard home which was multileveled.

A lower room or cellar was used as a storeroom. In the hilly areas like Bethlehem, a cave adjacent to the courtyard might often be adapted for this purpose. Here the family’s prized or more vulnerable animals could be fed and sheltered at night, protected from the cold, thieves and predators.”

The presence of livestock nearby explains the need for a manger (feeding trough), which served as baby Jesus’s cradle. “That a child should be found lying in a manger was unusual, and yet it may have reflected not a situation of abandonment and isolation but one of compassion and protection and of the order of family life in traditional Jewish society of the first century AD,” Pfann concludes.

The culture of hospitality, architecture of homes and linguistic evidence conspire to render the grotto (cave) at Bethlehem’s Church of the Nativity a reasonable site of the original Christmas.

Excavations conclude the cave was in use in the first century, and church father Justin Martyr writes in the second century that Jesus was born in a cave.

“You’d generally think the cave was kind of an odd location for a baby to be born, but given the circumstances, it could certainly be the site,” according to Pfann.

“Bethlehem is the last home for the Palestinian Christians in the West Bank.

There is only one percent Christians left in the West Bank. Almost all are living in the area of Bethlehem (which includes Beit Jala and Beit Sahur). It is known for that among the remaining 99%. I’ve had people coming to Bethlehem from other cities seeking Christians who can give them answers about Christianity and Christ. Like the shepherds who came 2,000 years ago seeking to know who is this baby that the angels speak about, today we still can see people coming to Bethlehem asking, ‘Who is this Jesus?’ “The people of Bethlehem are known to be a welcoming people. Today, if walking on the streets of Bethlehem, choose any home and knock on the door, ask to have a cup of coffee. Almost all will welcome you for more than coffee.

People here are known for their hospitality. It is disgrace in Bethlehem culture if one does not welcome people in their home.”

Salman is leading the church to continue Bethlehem’s tradition of offering refuge and redemption, and is planning on building a hotel and a medical clinic in one of the city’s vacant lots. He jokes that he’ll make sure there is always room in the inn.

“We are a church open to everybody; our members and ministers do not abandon opportunities to welcome people from everywhere. In our Sunday services we have many nationalities visiting us. In one service we could get at the same time guests visiting us from all over the world. It is really a beautiful thing to see prayers coming up from Bethlehem, from one place in one spirit to one God for one purpose – peace on earth.”

And goodwill toward men…