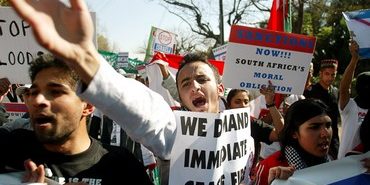 A group of Christian leaders in South Africa, joined by the country’s Chief Rabbi Dr. Warren Goldstein, has called on the ruling African National Congress party to refrain from taking “partisan action” in its stance towards the Israel-Palestinian conflict during its national conference that began Sunday morning.

The ANC’s 53rd National Conference was convened in the city of Mangaung, also known as Bloemfontein, and will see the 5,000 party delegates vote on the party’s leadership as well as numerous other resolutions and issues affecting the party.

The issue of the Israel-Palestinian conflict is likely to be addressed in conference motions on South African international relations, and religious leaders have raised concerns that the resolution will not deal with the issue in a balanced manner.

In an open letter to the conference delegates published on the front page of South Africa’s Sunday Times, seven Christian leaders and Chief Rabbi Warren Goldstein called on ANC delegates “not to endorse a divisive motion of conflict” but instead to promote peaceful negotiations between the parties to the conflict.

“South Africa has no just cause for choosing sides,” the letter read. “We should support both sides in their struggle for a peaceful solution.

When South Africa’s ruling party chooses sides in this bitter conflict, our country loses the credibility to be a voice for peace between the parties, and only the agenda of conflict is served. Such actions impede a peaceful solution that would enable Jews to live in their ancient Biblical land in peace side by side with their Muslim neighbors.”

The letter also criticized the possibility that an ANC national conference resolution would include a call for boycott divestment and sanctions to be enacted by South Africa against Israel.

In October this year, the 3rd International Solidarity Conference organized by the ANC in the capital Pretoria declared its support for a boycott, divestment and sanctions campaign against Israel, with ANC chairperson and former South Africa deputy president Baleka Mbete accusing Israel of being “worse than apartheid South Africa.”

The letter was signed by, among others, Archbishop of Johannesburg Buti Tlhagale, and President of International Federation of Christian Churches Pastor Ray McCauley.

Speaking to The Jerusalem Post, Goldstein said that the leaders who signed the letter represent approximately 10 million people around the country, and that many of them wish to see a different approach from the government towards the conflict.

“They are looking for an approach which is more balanced and supportive of peace rather than one which is one-sided,” Goldstein said.

The chief rabbi argued that “more significant than what the ANC does or doesn’t do is that millions of people see that the correct approach is for South Africa to be more balanced and support both sides in finding a peaceful resolution to the conflict.”