Netanyahu: This is why true peace remains unachievable 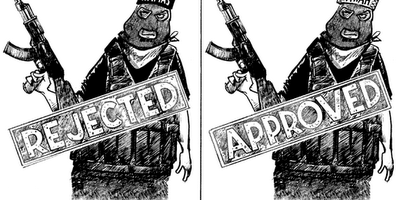 Israeli Prime Minister Benjamin Netanyahu this week pointed to the overtly hostile rhetoric of Hamas coupled with Palestinian leader Mahmoud Abbas’ efforts to reconcile with the terror group as the primary reason that true, lasting peace is currently unachievable.

Over the weekend, Hamas marked its 25th anniversary with a gala event in Gaza City. In attendance was overall Hamas leader Khaled Mashaal, who usually resides in Damascus. Speaking before hundreds of thousands of Gazans, Mashaal declared:

“Palestine is our land and nation from the (Mediterranean) sea to the (Jordan) river, from the north to the south, and we will not cede even one inch of it.”

The Hamas leader recently gave an interview to CNN in which Mashaal stated that he was ready to accept a Palestinian state in the pre-1967 borders. His words in Gaza this past weekend are further evidence that it is impossible to trust what Palestinian leaders say in English, and it is their pronouncements in Arabic that must be given greatest weight.

Mashaal went on to insist that political, diplomatic and legal efforts to achieve control of the land must be coupled with violence. He explained that all non-violent methods are “senseless in the absence of resistance,” which is how the Palestinians define their acts of terrorism against Israelis.

Holding out of olive branch to Abbas and his Palestinian Authority, Mashaal said that Hamas desires unity. “We are a single authority, a single reference, and our reference is the PLO, which we want united,” concluded the terrorist leader.

The Abbas regime has responded in kind, and senior Palestinian Authority official Ziad Abu Ziad told Israel’s Army Radio on Sunday that the prospects for unity between Hamas and his own ruling Fatah faction are “better than ever.”

Fatah has reportedly stopped operating against Hamas in Judea and Samaria (the so-called “West Bank”) and might even allow its rival to hold a rally in the central Samaria city of Nablus.

Hamas actually won a majority in the Palestinian parliament in the last general election, but has been estranged from the presidency and the Palestinian Authority hierarchy since violently seizing control of the Gaza Strip in 2007.

Netanyahu, meanwhile, said Hamas had “shown its true face,” and slammed Abbas for seeking unity with a group that will clearly never live in peaceful coexistence with the Jewish state.

“It’s interesting that Abbas has issued no condemnation of remarks about the destruction of Israel… To my regret, he strives for unity with the same Hamas that is supported by Iran,” said Netanyahu at Sunday’s cabinet meeting.

With things as they currently stand, Netanyahu said it would be utter foolishness for Israel to consider surrendering more land to Abbas’ regime.

“I have always been astonished at the delusions of others who are prepared to continue this process and call it peace,” continued the prime minister. “You would hand over more territory…to the same people and the result, of course, will be a Gaza on the outskirts of Tel Aviv.”

Summing up, Netanyahu pointed out that Hamas “has no intention of compromising with us,” and therefore Abbas’ cozying up to the terror group is very telling.