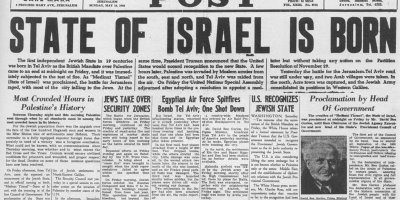 The first issue of this newspaper, then called The Palestine Post, was published in Jerusalem by its legendary founding editor, Gershon Agron, on December 1, 1932. Agron, who was born in Ukraine but grew up in Philadelphia, served as editor until 1955, when he became mayor of Jerusalem, a position he held until his death in 1959.

Since 1932, the paper has been printed daily (except on Saturdays), sometimes against all odds. The editorial team even managed to put out a newspaper the day after its downtown offices were bombed on February 1, 1948.

Two years after the establishment of the State of Israel, the paper was renamed The Jerusalem Post, at the suggestion of the late art editor, Meir Ronnen, who made aliya from Australia.

The Post passed through a variety of hands until the current owners, Mirkaei Tikshoret Ltd., took over eight years ago.

For eight decades, it has faithfully reported on the dramatic history of the Jewish state, in which there never seems to be a dull day. Editors, reporters, graphic artists and printers have worked in stressful circumstances and against the clock to produce a paper they can be proud of the next day.

Many famous figures have visited the Post over the years, from David Ben-Gurion to Shimon Peres, while a number of notable personalities and journalists worked here, from David Bar-Illan to Wolf Blitzer. Over the years, the paper produced many historic front pages (collected in a newly revised Front Page Israel book), probably the best known being “STATE OF ISRAEL IS BORN” on May 16, 1948.

With today’s newspaper you will find, instead of our usual Friday Magazine, a special 80th anniversary supplement that displays the vast scope of events and personalities that have graced the pages of the Post over the years. It also reveals what an international mix is found at the paper.

Edited by veteran journalist Greer Fay Cashman, a former Aussie, the supplement features a cover picture taken by staff photographer Marc Israel Sellem – an oleh from France – that shows Polish-born chief archivist Alexander Zvielli reading the Post on an iPad. Zvielli, 91, has worked at the newspaper for a record 67 years and is a walking encyclopedia of its history.

In the 80th anniversary edition, Zvielli vividly recalls the attack on the Post more than 64 years ago. He recounts how three Post staffers were killed – Haim Faber, Nathan Rabinowitz and Moshe Weinberg – while others were wounded, “half-blinded from the flying lead, glass and dust.” Zvielli credits his Linotype machine for protecting him, but one of his eyes was injured.

At the helm of the Post today are our Israeli owner, Eli Azur, and CEO Ronit Hasin-Hochman, Editor-In-Chief Steve Linde, who made aliya from South Africa, US-born Managing Editor David Brinn and News Editor (and Jerusalem Report Editor-in-Chief) Ilan Evyatar, whose family came from the UK.

We have had our ups and downs. Work strife peaked with a much-publicized walkout led by David Landau in 1990, a year after the paper was purchased by David Radler’s Hollinger Inc.

There have even been romances. One of our former editors- in-chief, Bret Stephens (2002-2004), who was only 28 when he took up the position, met his wife-to-be, Corinna da Fonseca-Wollheim, at the Post. We even have continuity, sometimes. Noa Amouyal, our new editorial assistant, is the daughter of Barbara (Amouyal) Opall-Rome, who worked as police reporter in the 1980s.

On behalf of the management of The Jerusalem Post, we thank all those who currently work at the newspaper’s editorial headquarters in Jerusalem and its administrative offices in Tel Aviv, where the Internet Department is also based.

We also express our gratitude to all those who worked at the Post in the past. Three of our most veteran staffers, Judy Siegel, Sarah Honig and Liat Collins, have penned reports in today’s anniversary supplement.

A special thank-you to all our readers, some of whom have been enjoying the paper for decades and others who have come aboard only recently. Today, our readership has vastly expanded via a host of media, from the International and French editions, Jerusalem Post lite and Ivrit, to our website, JPost.com, which hit a record high of more than five million unique visitors last month.

Finally, we pay tribute to a special class of our readers – the diplomatic corps – whom we are hosting at our first Diplomatic Conference in Herzliya next Wednesday.

To all our colleagues and friends, thank you for your support and for being part of our 80th anniversary.