The 7 Pieces of Advice by Trotsky for Obama, found in the 1934 Chicago Tribune Cartoon ‘Planned Economy or Planned Destruction’ 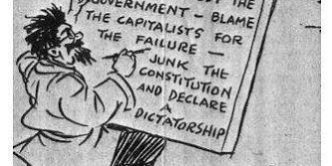 This image is taken from the 1934 Chicago Tribune cartoon ‘Planned Economy or Planned Destruction?’. It focuses on the character of Leon Trotsky, who is laying out a series of policy goals for the United States. The Chicago Tribute suggested in its latest reprint of this cartoon that we take a look at this cartoon and see if it rings true in today’s political and economic climate.

The advice and truths that Trotsky is writing in this cartoon are advice and truths on how to establish a tyranny and destroy life, liberty, and property, and it appears from an objective standpoint over the last several years that President Obama and his Democratic allies in Congress (and some Republicans too)  are following this advice and believing these truths. They are rejecting other truths on which our nation was built- that all men are equal, that all men are endowed with certain inalienable rights, that the purpose of government is limited to protecting these rights from men who would take them away, that these rights are the right to live and live in freedom and earn and keep property, and that governments that abuse any of these rights are tyrannical and deserve to be abolished so that men may put in place better governments to protect these rights.

America is playing out some sort of Greek play, where our main character in his hubris thinks that he can achieve positive results by implementing the same policies in the past that only achieved negative results. Opposition to him and his agenda should be motivated by knowing that history, morality, and truth are on our side and not with him, and that where he is taking our nation and the world is to a place where life is less secure, liberties and freedoms are broken, and property and wealth are not protected.