Building in Jerusalem: A Strategic Imperative 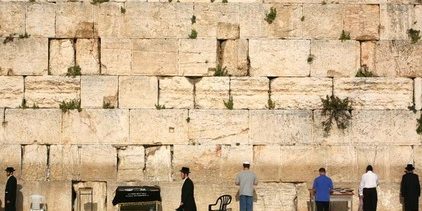 Israeli Prime Minister Binyamin Netanyahu must ignore the Pavlovian response of the international community against building in Jerusalem, particularly in Area E1. The fate of the Jewish State depends largely upon the government’s ability to take immediate action and to populate the area that links Jerusalem to Maaleh Adumim with thousands of Jews.

Maaleh Adumim, a suburb of over 40,000 Jews east of Jerusalem, serves as the linchpin in establishing an effective line of defense along the Jordan Valley against aggression from the east. B

uilding a Jewish-populated corridor to Maaleh Adumim will prevent the division of Jerusalem and secure the only safe route via which Israel can mobilize troops from the coast to the Jordan Valley if necessary.

Jerusalem’s importance to the Jews is not only historical and religious. Rather, Jerusalem also holds strategic importance in controlling the only highway from the coast of the Mediterranean Sea to the Jordan Valley, along which Jews are able to travel with little interference from concentrations of Arab population.

Those who object to Jewish presence in Area E1 express concern for Palestinian contiguity, which is a deceptive argument. Free travel between Samaria and Judea can be arranged quite easily by constructing overpasses or tunnels. (Ironically, the Palestinians suggest these arrangements in response to Israeli concerns regarding the Palestinian demand for a corridor between Gaza and Judea that would divide Israel in two.)

The main issue, however, is Jerusalem. The Palestinians plan to populate Area E1 with Arabs in order to create demographic contiguity between Samaria and East Jerusalem, thereby facilitating the division of the city. Such a development would also isolate Maaleh Adumim and undermine Israeli claims to the Jordan Valley. The only way to prevent the realization of these Palestinian plans is to settle Jews in Area E1.

Many pundits claim that Israel no longer needs the Jordan Valley as a shield against aggression from the east. They argue that the peace treaty with Jordan renders the dangerous threat of the eastern front’s proximity to Israel’s population centers and economic infrastructure a thing of the past.

Yet this is a very short-term perspective, motivated by a desire to convince the Israeli public that the Jordan Valley is militarily dispensable. Such a view ignores the immense potential for political upheaval in the Middle East, perceived American weakness, the greater political role of radical Islamists, and the growing pressures upon the Hashemite regime.

The destabilization of Hashemite Jordan and Saudi Arabia, an emboldened and more radical Syria, and the reemergence of the eastern front as a credible threat are not far-fetched scenarios.

Advocates of turning over the Jordan Valley to the Palestinians discount its topographical importance by referring to current military technology that allows for precision strikes from a distance. They argue that the ability to launch defensive strikes from the coast eliminates the strategic need for the Jordan Valley as a means of defense. H

owever, these armchair strategists overlook the history of military technology, which shows a clear oscillation between the dominance of offensive and defensive measures over the centuries. The belief that the technology of today – which temporarily reduces the importance of topography – will remain unchallenged constitutes a dangerous strategic fallacy. Designing stable defensible borders in accordance with the current, yet transient, state-of-the-art technology and political circumstances is strategically foolish.

Therefore, if Israel wants to maintain a defensible border along the Jordan Valley it needs to secure the road that leads there from the coast, via an undivided Jerusalem and via Maaleh Adumim.

We should also remember that the US has opposed Israeli settlement efforts since 1967 and only rarely did American objections have an impact on Israeli decisions on this issue. Moreover, the Americans can be persuaded to tacitly go along with linking Maaleh Adumim to Jerusalem if a clear strategic vision based upon the principle of territorial compromise is presented.

While the strategic wisdom of indiscriminately settling the Land of Israel is not compelling, a selective settlement policy focusing on areas within the Israeli consensus, including Maaleh Adumim and the Jordan Valley, can be pursued with little foreign interference.

Area E1 is of vital importance for the political future of Jerusalem and for Israel’s chances to establish a defensible line along its eastern border. It is imperative to build homes for Jews there. Hopefully, Netanyahu will soon send the bulldozers to create vital irreversible facts on the ground.