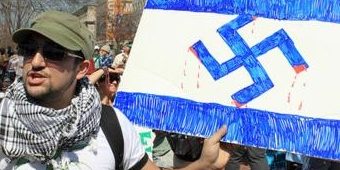 As an example of what the insightful commentator Melanie Phillips referred to as a “dialogue of the demented” in her book, The World Turned Upside Down, Northeastern University’s chapter of Students for Justice in Palestine (SJP), paralleling the moral incoherence of anti-Israel activists demonstrating elsewhere in American and European cities, sponsored a November 15th Boston rally in support of Gaza and, presumably, its genocidal thugocracy, Hamas.

The members of SJP who attended Tuesday’s demonstration, along with their fellow travelers of anti-Semites, Israel haters, and such psychologically mystifying groups as Jewish Voice for Peace, apparently were not sufficiently concerned when some 12,000 rockets and mortars were launched almost daily into southern Israeli towns from Gaza by Hamas over the past seven years, aimed at civilian targets for no other reason than the intended victims were Jews. In fact, nearly 600 rockets plunged into Israeli neighborhoods just since the start of Operation Pillar of Defense, Israel’s current campaign to suppress further assaults on its populace.

Once Hamas began to deploy more sophisticated, and lethal, Iranian-supplied Fajr-5 rockets, able to reach Tel Aviv and Jerusalem, Israel finally retaliated, as it had in 2008-2009 during Operation Cast Lead, with targeted strikes against Hamas. Despite surgical strikes against terrorist targets, some 100 Palestinians have been killed so far, and the inevitable civilian casualties were immediately elevated by Israel’s worldwide critics to “crimes against humanity,” “genocide,” and “disproportionate” responses to what they evidently believe to be a mere inconvenience for the Israelis upon whom rockets and mortars have incessantly rained down. “Israel’s assault on Gaza will not be tolerated,” Northeastern’s SJP wrote on its Facebook page, lacking any context or the possibility that Hamas’ actions may have contributed to the current conflict, and they called on supporters “to take a stand against these ongoing massacres!”

What was particularly revealing, and chilling, about the Boston rally was the virulence of the chants and messages on the placards, much of it seeming to suggest that more sinister hatreds and feelings—over and above concern for the current military operations—were simmering slightly below the surface. Several of the morally self-righteous protestors, for instance, shrieked out, to the accompaniment of drumbeats, “Long live Intifada,” a grotesque and murderous reference to the Second Intifada, during which Arab terrorists murdered some 1000 Israelis and wounded more than 14,000 others.

That pro-Palestinian student activists, those who purport to be motivated by a desire to bring “justice” to the Middle East, could publicly call for the renewed slaughter of Jews in the name of Palestinian self-determination demonstrates quite clearly how ideologically debased the human rights movement has become. Students on U.S. campuses, who never have to face a physical threat more serious than getting jostled while waiting in line at Starbucks, are quick to denounce Israel’s very real existential threats and the necessity of the Jewish state to take counter measures to thwart terrorism. And quick to label the killing of Hamas terrorists by the IDF as “genocide,” these well-meaning but morally blind individuals see no contradiction in their calls for the renewed murder of Jews for their own sanctimonious cause.

Of course, the notion of murdering Jews to extirpate Israel is not a unique one, since words to that effect are regularly uttered by, among others, Iran’s raving president Mahmoud Ahmadinejad, who dreams of such apocalyptic final solutions. What is unique is the morally-defective logic that would enable otherwise sane people to justify a second Holocaust, the mass murder of Jews, on the basis of Israel having defended itself from years of rocket attacks and having killed murderous terrorists in the process. Making the Middle East free of Jews, Judenfrei, is exactly what Hamas, the group of genocidal brutes being cheered on by the Boston demonstrators, ardently longs for; in fact, Hamas’s charter expresses as one of its core tenets that Israel should be eliminated and that Jews should be murdered, that “Israel will exist and will continue to exist until Islam will obliterate it, just as it obliterated others before it,” and that “the time will not come until Muslims will fight the Jews (and kill them); until the Jews hide behind rocks and trees, which will cry: O Muslim! there is a Jew hiding behind me, come on and kill him!”

Other protestors were less overt in their angry chants, carrying signs and shouting out the oft-heard slogan, “Free, Free Palestine,” or, as they eventually screamed out, “Palestine will be free, from the river to the sea.” That phrase suggests the same situation that a rekindled Intifada would help bring about, namely that if the fictive nation of “Palestine” is “liberated,” is free, there will, of course, be no Israel between the Jordan River and Mediterranean—and no Jews.

Another deadly chorus emanated from protestors during the rally: “When people are occupied, resistance is justified.” That is an oft repeated, but disingenuous and false notion that stateless terrorists have some recognized human right to murder civilians whose government has purportedly occupied their territory. That is clearly not any longer the case in Gaza, where every Jew was removed in 2005 and where there is a blockade in effect to prevent the influx of weapons, but clearly no occupation. It may be comforting for Israel’s ideological foes to rationalize the murder of Jews by claiming some international right to do it with impunity and a sense of righteousness. Unfortunately, however, as legal experts have inconveniently pointed out, the rally participants and their terror-appeasing apologists elsewhere are completely wrong about the legitimacy of murder as part of “resistance” to an occupying force. Article IV of the Third Geneva Convention, the statute which defines combatants and legitimate targets in warfare, is very specific about who may kill and who may be killed, and it does not allow for the murder of either Israeli civilians—or soldiers—by Palestinian suicide bombers who wear no identifying military uniforms and do not follow the accepted rules of wars. Nor, certainly, does it recognize the legitimacy of launching more than 12,000 random rocket and mortar attacks from Gaza aimed at Israeli neighborhoods, a violation of the Geneva conventions that require “distinction” in the targeting of opponents and clearly a more salient example of “collective punishment” than, say, the Gaza blockade itself.

So when pro-Palestinian activists and critics of Israel repeat the claim that Palestinians somehow have an internationally-recognized legal “right” to resist occupation through violent means, they are both legitimizing that terror and helping to insure that its lethal use by Israel’s enemies will continue unabated. Those who lend their moral support to terrorism, and who continually see the existence of terror as a justifiable tool of the oppressed, have help introduce a sick moral relativism into discussions about radical Islam and Palestinianism, not to mention Israel’s right to protect its citizens from being slaughtered. And the notion that Israel cannot, or should not, retaliate against these rocket attacks until a sufficient number of Israelis has been murdered is equally grotesque. How many dead Jewish civilians would be a sufficient number before the international community agreed to Israeli counter-measures? Should Israel have continued to wait until a school or daycare center was struck, forcing Israel to play, in the words of Harvard law professor Alan Dershowitz, “Russian roulette with its children?”

The fact that so many demonstrators feel comfortable with openly supporting a terrorist group with the single purpose of murdering Jews indicates quite dramatically how prevalent, and acceptable, genocidal Jew-hatred has become, both in the streets of Boston and on campuses in America and Europe. This is clearly not, as it is regularly asserted, merely “criticism” of the Israeli government’s policies; this is what many define as a “new” anti-Semitism—an irrational, seething animus against the Jew of nations, Israel.