Peace or Pieces? What do the Palestinians really want? 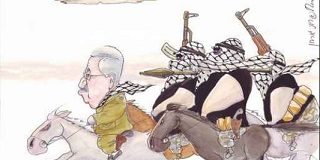 Is it peace with Israel the Palestinians want or pieces of Israel the Palestinians want?  Obviously the answer is pieces as in breaking Israel apart and dividing the spoil among the blood thirsty radicals who are constantly seeking Israel’s destruction.  Israel’s long-suffering patience finally reached a breaking point recently as Hamas launched relentless rocket attacks on innocent Israelis.  Between January and November 2012 over 2200 rockets have been fired into Israel by Hamas in Gaza and, for the first time, several Iranian supplied rockets landed near Tel Aviv and Jerusalem.

Israel was left with no alternative but to respond so as to protect her citizens and her land. The Israeli Defense Forces (IDF) bombed and destroyed one of the main Hamas headquarters buildings, then took out a high level Hamas leader with the pinpoint bombing of his automobile. Other bombings of Hamas weapons positions inflicted more damage, including the deaths of many Hamas terrorists as well as some Palestinian civilians and only because they either failed to heed Israel’s warning to leave areas where Hamas operates or because their own people used them as human shields knowing that civilian deaths plays well for the media.

Just as Israel was hunkering down to launch ground operations as part of her self defense plan, the international community began calling for a truce or cease fire.  Where were these voices when Hamas was firing literally thousands of deadly rockets into Israel killing and disrupting the lives of countless Israeli men, women and children?

At just the moment when it seemed Israel might end the radical Palestinian madness once and for all, a cease-fire went into effect.  At least for the moment, Israel’s hands are tied from inflicting a decisive defeat on her terrorist enemies but the past performance of the Palestinians is, unfortunately, a likely guarantee of future actions.  Regretfully, it won’t be long before the Palestinians are at it again.  Israel knows it and, if world leaders are not afraid to admit the truth, they know it too.  Mark Regev, senior spokesperson for Israel’s Prime Minister Netanyahu said, “Israel is not interested in a ‘time out’ allowing Hamas to regroup after Israeli strikes have done damage. We want a new reality in which Israelis don’t live under rocket fire from Hamas,” he said.  This is exactly what the UN and world leaders should be demanding – that Hamas cease all aggression toward Israel and declare that before there can be any consideration for a two-state solution, Hamas must first change its charter which calls for the destruction of Israel and then all Palestinians must collectively agree and proclaim that Israel has a right to exist as a Jewish state, to have defensible borders, and to be afforded the right to live in peace without the threat of terrorist aggression from their neighbors.

Knowing the Palestinians have a long history of failing to live up to their end of any agreement, why did Israel agree to this cease-fire? Prime Minister Netanyahu expressed it clearly when, standing next to U.S. Secretary of State Hillary Clinton he said, “Obviously, no country can tolerate a wanton attack on its civilians.  If there is a possibility of achieving a long-term solution to this problem through diplomatic means, we prefer that. But if not, I’m sure you understand that Israel will have to take whatever actions are necessary to defend its people.”  But the situation goes deeper with perhaps a bit of arm twisting.  Israel Today news magazine reported that U.S. President Obama threatened to cut some U.S. aid to Israel and Fox News quoted an American military official as saying that if Israel does not stop this fight, the U.S. will not supply the spare parts Israel needs for its aircraft.

Clearly Israel’s heartfelt desire is for peace and they want the world to know that their commitment to peace is concrete and unwavering.  They want the world to know that they thirst for peace more than the radical Palestinians thirst for blood, especially Israeli blood.  Israel’s President Shimon Peres declared, “Israel is not fighting to gain any territory, we are only fighting to put a stop to criminal activity.” Israel’s Ambassador to the United States, Dr. Michael Oren stated, “We want the world to know that we simply want to live in peace.” And Prime Minister Netanyahu stressed to visiting U.S. Secretary of State Hillary Clinton that, “Israel is ready to do whatever we need to do, and we will do everything we need to do to preserve peace.”  Israel would rather not have to fight for peace but if forced to do so, they are left with no alternative.