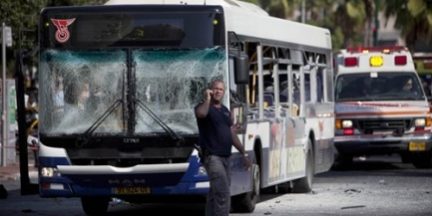 Police were conducting a massive manhunt in Tel Aviv after an explosive device was detonated inside a bus on Tel Aviv’s Shaul Hamelech Street at noon on Wednesday in what police said was a terror attack.

Magen David Adom medical services said 20 people were wounded in the attack. The bomb blew out the windows on the vehicle, a 76 line bus belonging to the Dan company, causing extensive damage but no fatalities.

Tel Aviv Sourasky Medical Center officials said one person was seriously wounded, one person moderately wounded, and one person was listed in light-to-moderate condition. The official said that the three people were being operated on for blast, burn and shrapnel injuries, mostly from nuts and bolts lodged in their bodies. All the others were lightly hurt and some were being treated for shock.

Police said that a person had thrown a bag into the bus on Shaul Hamelech Street and ran away. The bus was not especially full of passengers at the time. Police were conducting searches around the area and ordered people off the streets.

Police Commissioner Yochanan Danino confirmed it was a terror attack. “One of the scenarios we have been preparing for is more than just rockets but also terror attacks in our cities. There is high motivation by the terror groups to hit our cities. We are massively deployed throughout the entire country with a special emphasis on the big cities. We are interviewing eyewitnesses and conducting an investigation in conjunction with the Shin Bet. If there is a terrorist on the loose we are doing everything to put our hands on him,” Danino said.

Police were conducting a chase after possible suspects in the area after the attack, saying that there were possibly two people involved in the attack. Police Special Forces caught a suspect near the Yahalom Theatre in the nearby Ramat Gan Diamond Exchange, but the man was released shortly afterward when it became clear he was not connected to the bus bombing. Police were searching for a female suspect said to be in possession of another explosives device in Tel Aviv, as well as checking other possible avenues for accomplices.

The attack came on the eighth day of Operation Pillar of Defense amid intensive cease-fire talks attempting to ward off a massive IDF ground operation in the Gaza Strip. Prime Minister Benjamin Netanyahu convened the Forum of Nine senior ministers shortly after the attack to discuss the emerging cease-fire deal with Hamas and would take the bus bombing into account.

“There were no specific warnings of this attack but we knew this was possible during the current round of fighting,” Internal Security Minister Yitzhak Aharonovitch said Wednesday. “We are dealing with murderous organizations,” Aharonovitch said.

Police told Channel 10 that the suspect had waited at the corner of Henrietta Szold and Shaul Hamelech streets under the building of the courthouse at the bus stop. He apparently waited for the bus doors to open and threw a bag in, which then exploded.

Reuters reported that Hamas lauded the Tel Aviv bombing as a “natural response” to the killing of the Dalou family in Gaza earlier in the week, but stopped short of claiming responsibility for the attack. Other media outlets reported wild celebrations in Gaza once news of the bus bombing spread.