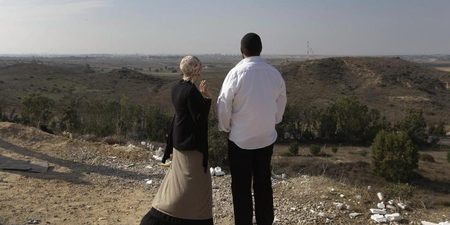 Palestinians have a fierce new song to accompany their intensified conflict with Israel. “Strike a Blow at Tel Aviv,” recorded by Shadi al-Bourini and Qassem al-Najjar, was posted last week on various Palestinian websites, including the Facebook page of the TV show Fenjan Al-Balad, which describes its mission as “trying to influence young Palestinian society for the better.” The video, which features images of wounded Israelis and massed Qassam artillery rockets, opens with these lines:

Over a driving beat, the lyrics (translated by the Middle East Media Research Institute) grow increasingly bellicose. “We don’t want no truce or bargain,” they proclaim. They exhort the missiles to “explode in the Knesset” and “terrorize Tel Aviv,” while mocking the Israelis in bomb shelters who “cower with fear.”

There have been many Israeli war songs over the years. Indeed, the endless conflict with the Arabs has engendered some of Israel’s most enduring music. But most of it revolves around a longing for peace and the desire for normality. An Israeli equivalent of “Strike a Blow at Tel Aviv,” ecstatic at the prospect of killing the enemy, is virtually unthinkable.

Other Palestinian videos have also been getting attention this week. Al-Aqsa TV, the official Hamas-run television channel, has been airing messages that extol suicide bombings and advise Israelis to get ready for more of them. “We’ve missed the suicide attacks,” one video jeers. “Expect us soon at bus stations and in cafés.” A second, along with video of rockets being fired into Israel, warns “the Zionists” not to go to bed: “We may get you in your sleep.” In still another, Hamas reiterates the oft-repeated boast of murderous jihadists everywhere: “ love death more than you love life.”

Media coverage of the hostilities in Gaza tends to focus on rockets and casualties and diplomatic maneuvering. Not emphasized nearly enough is the vast moral distance that separates Israel from its terrorist enemy. Israel and Hamas are not at war over territory. What divides them is an unbridgeable cultural abyss. On one side is a Jewish state that seeks peace with its neighbors and has repeatedly offered deep concessions to achieve it; on the other, a fanatic regime of jihadists who glorify death, abominate Jews – and are obsessed with eradicating that solitary Jewish state.

“Our struggle against the Jews is extremely wide-ranging and grave,” avows the hate-drenched Hamas charter. Success will not come, declares Article 7, “until Muslims will fight the Jews and kill them; until the Jews hide behind rocks and trees, which will cry: ‘O Muslim! There is a Jew hiding behind me, come and kill him!'”

By now it shouldn’t come as news that Hamas means what it says. By now it should be obvious even to the congenitally naïve that so long as Hamas rules Gaza – a de facto Palestinian state, no matter what anyone calls it – it will never end its quest for Israel’s annihilation. To Western eyes that may seem an improbable objective, given Israel’s enormous military edge. But Hamas understands the value of terror. When it can send hundreds of rockets slamming over the border, when it can force Israelis to listen constantly for the siren that means they have just 15 seconds to find shelter, Hamas inches toward its goal. And when Israel finally retaliates and only then does an international uproar ensue, Hamas inches closer still.

Secretary of State Hillary Clinton headed to the Middle East on Tuesday. The UN secretary-general called for a cease-fire. President Obama’s spokesman insisted that “the best way to solve this is through diplomacy.” But what can diplomacy achieve with an enemy that rejects the basic norms of international behavior? That is not only indifferent to the suffering of its own people, but welcomes it for its propaganda value? That rejoices in suicide terrorism, and runs TV spots promising more of it?

Any cease-fire now means a win for Hamas, which will go on fomenting violence, hatred, and death. Diplomacy cannot solve the problem of terrorist regimes. Neither can unilateral concessions or UN resolutions. The only solution is to deprive the terrorists of power. So long as Gaza remains a Hamas-ruled tyranny, peace will remain but a dream.