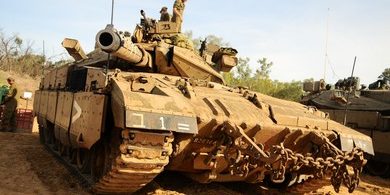 Hamas took credit for the attack, claiming to have shot “an improved Kassam,” which it called an M-75, towards Jerusalem. The launch represents the first Hamas rocket attack aimed at Jerusalem.

A rocket is believed to have fallen in the Judean desert, near the area of Takua, though this is not yet certain. Police confirmed one rocket landed in Gush Etzion.

Hours earlier, two rockets were fired from the Gaza Strip in the direction of the greater Tel Aviv area and prompted a red alert air raid siren to be sounded in the city for the second straight day.

The IDF stated that the rocket had not landed in Tel Aviv, but local residents reported hearing an explosion following the siren. No injuries or damage were reported.

The armed wing of Hamas claimed responsibility for that attack as well.

The cities of Be’ersheva, Ashdod, and Ashkelon, and southern towns came under repeated rocket attacks throughout the day. Homes were damaged in the attacks.

Thursday and Friday’s attacks on the Tel Aviv area marked the first time the center of the country was hit in the renewed violence from the Gaza Strip and the first time that a real siren was sounded in Tel Aviv since the Gulf War in the early 1990s. Palestinian Islamic Jihad took responsibility for Thursday’s rocket on Tel Aviv.

The Tel Aviv Municipality decided to open all public bomb shelters in the city on Friday afternoon following the attacks.

The attack on the greater Tel Aviv area came as Operation Pillar of Defense entered its third day. More than a hundred rockets were fired into the South on Friday despite the IDF’s continued air strikes on Gaza, meant to root out the terror infrastructure in the territory.

Following the attack on Tel Aviv, the IAF struck 40 targets in the Gaza Strip and the Navy struck three targets.

Nearly 350 rockets have landed in Israel since the operation began on Wednesday, with three Israelis losing their lives in a rocket attack on Kiryat Malachi on Thursday.

Three IDF soldiers were wounded by a rocket attack on the Eshkol Regional Council area on Friday, one moderately and two lightly.

Through Friday evening, the IAF struck 613 targets in Gaza, focusing on rocket depots and launchers. It also destroyed a bomb-laden smuggling tunnel.

The Iron Dome intercepted 99 rockets today. In total, it intercepted 197 rockets since the start of the operation.

According to Palestinian sources 24 people have been killed in IDF strikes on Gaza.