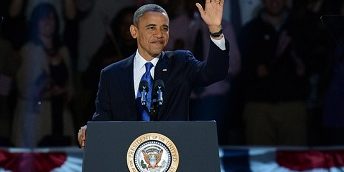 After spending election night banging the wall with my head in disbelief, I realized that what was valid in American politics in the past will no longer be. The sad fact is that Democracies are not perfect systems; despite the economy, despite the Middle East, despite the unemployment rate, the majority of the American public chose to go with the illusion of change rather than with the sacrifices inherent in dealing with reality. As for the newly reelected President Obama, he must confront his greatest challenge today, uniting a deeply divided nation and making the switch from campaigning to governing.

Obama’s second term, can no longer be about hope, the hope is largely gone. Obama will confront a daunting agenda, from an economy that is still largely unable to sustain a prosperous American society for most Americans, to rampant unemployment in the foreseeable future, to the looming “fiscal cliff” towards the end of the year. Internationally, the Iran nuclear threat is like a ticking bomb waiting to explode, and America’s standing in the eyes of Russia, China, and the majority of the third world sees Obama’s America as weak, always retreating, always uncertain about her role as the leader of the free world.
On Tuesday night, Bill O’Reilly was interviewed on Fox news, it was hours before Obama was declared the winner, but O’Reilly could read the writing on the wall. He was about to talk about what is largely taboo in the American political discourse, mainly that it’s all about demographics, which is a code word for the black and Latino communities who voted in bloc and in mass for Obama, opting for a clan mentality vote irrespective of ones personal preference. “The white establishment is now the minority,” O’Reilly said. “You are going to see a tremendous Hispanic vote for President Obama. Overwhelming black vote for President Obama. “People feel that they are entitled to things and which candidate, between the two, is going to give them things? “The demographics are changing,” O’Reilly said. “It’s not a traditional America anymore.”

Besides the demographics, there is something else, even though it didn’t show up in all of the traditional polls. When Obama campaigned, in speech after speech, the same thing would always happen. “We love you!” someone would shout out from the crowd. And always Obama would shout back “I love you back,”. I don’t think this happened to often if at all to Mitt Romney. The bottom line being that what motivated the Obama majority on Election Day is about who makes my life and my family’s life better. Obama legitimatized dependency and entitlements, making it OK to get something for nothing. No guilt, no Protestant work ethic, giving his supporters not what they need, but what they want. This is why Obama won, the majority of voters trusted and believed in him to do exactly that, more so than in Romney.

Romney was known as a moderate, a successful father, husband, businessman, and governor. He seemed like a nice guy, modest yet determined, always decent, yet the Obama campaign succeeded in making Romney seem like a menace, the enemy of the middle class, the one who will pull the plug on free lunches. Obama successfully defined Romney in the minds of the majority of Americans as a selfish unrepentant Capitalist, and the mud stuck. The idea that success is a function of perseverance, sacrifice, and education, as represented by Romney became a liability. Obama knows his constituency, you know, the “demographic changes”, and he knows that they don’t want to be held personally accountable for their situation. Making Romney the embodiment of all that is wrong in the Capitalist system works much better on Election Day than rejecting the entitlement movement.

Let’s not forget the weather, Katrina was famously politicized by the Democratic Party and the enlisted Media to beat George Bush into mince meat politically. Yet, with the arrival of hurricane Sandy, leaving millions with no heat or electricity, looters roaming neighborhoods still without power, no gas at the stations, followed by a mediocre response by the Federal agency responsible for mass disasters, yet Obama is projected as the great savior, the shining black knight on a white horse. Romney could do no right, the weather being only a timely and convenient occurrence used to strengthen Obama’s standing on the eve of elections. Obama could have been held accountable in the same manner that President Bush was, but then again, why waste an opportunity to help Obama. Former President Bill Clinton saw the potential of Sandy as win. “Getting off the campaign trail, putting aside politics, working with the Republican governor of New Jersey, the independent mayor of New York City, and the Democratic governors of New York and Connecticut,” said Clinton, in a joint appearance with Obama. “It was a stunning example of how ‘we’re all in this together’ is a way better philosophy than ” you’re on your own.'” Case closed.

Romney’s message to the voting public was not undone by the weather. Romney often exhibited moral courage in sharing his belief that the growing inclination towards dependency and entitlements rather than self initiative and making it on your own is America’s greatest challenge. The results of the election show us that American society has opted for a free lunch. May God help us.

Ron Jager (www.ronjager.com), a 25-year veteran of the Israel Defense Forces, serving as a field mental health officer.  Prior to retiring in 2005, served as the Commander of the Central Psychiatric Military Clinic for Reserve Soldiers at Tel-Hashomer. Since retiring from active duty, he has been providing consultancy services to NGO’s implementing Psycho trauma and Psycho education programs to communities throughout Israel. Today, Ron serves as the Strategic Advisor to the Shomron Liaison Office.        To contact:  medconf@netvision.net.il