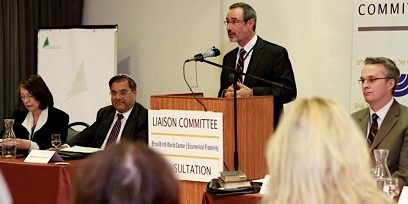 By RAPHAEL AHREN, TIMES OF ISRAEL—

Protestant clergymen painted a largely pessimistic view of the church’s relationship with Israel and the Jewish community during a  visit to the Holy Land, suggesting that anti-Semitism is a deep-seated problem based in Christian theology that will be difficult to uproot.

Jewish-Protestant relations are currently undergoing a severe crisis after senior leaders of Mainline Protestant churches in the US last month accused Israel of “widespread” human rights violations and urged Congress to reconsider military aid to Jerusalem.

“I am completely pessimistic in terms of believing that I, we, are going to overturn 2,000 years of erroneous theology that has manifested itself in all kinds of diatribes and anti-Semitic factions,” said the Rev. Paul Wilkinson, the associate minister at Hazel Grove Full Gospel Church, a small pro-Israel congregation in Stockport, England. “I believe we’d be fooling ourselves if we believed that we can overturn and change what I perceive to be a Goliath of theology in the church. The Goliath we face is the Goliath of replacement theology, the Goliath of Christian Palestinianism that taunts Israel, that goads Israel, that accuses Israel, that condemns Israel and those Christians who stand with Israel.”

Replacement theology, also called supercessionism, is the belief that Christendom has taken the Jewish people’s place as the recipients of promises God made in the Old Testament.

Wilkinson was speaking on Monday at the opening session of a consultation organized by the B’nai B’rith World Center in Jerusalem and the Ecumenical Theological Research Fraternity in Israel (ETRFI). Founded in 1966 by Jerusalem-based clergymen and theologians, ETFRI seeks to promote Jewish-Christian relations.

Some 20 pro-Israel Christian pastors, laymen and activists from across the globe gathered this week in a hotel outside Jerusalem to discuss anti-Israel attitudes that have typified Mainline Protestant Churches over the past decades. According to B’nai B’rith World Center, the three-day consultation aimed to build bridges between Israel and the Protestant denominations, and “to help change the biased positions they have adopted regarding the Israel-Palestinian conflict.”

Yet some participants painted a dark picture of Protestant-Jewish relations vis-à-vis support for Israel, saying the church overwhelmingly sided with the Palestinians.

“The humanitarian concern is the veil that covers, or is the rationalization for ultimately what I believe to be anti-Semitic ideas and anti-Semitic policies,” said Rev. Andrew Love, a minister in United Church of Canada, the country’s largest Protestant denomination.   In 2003, his church tried to critically reassess its relationship with the Jewish community, and “made a fairly significant step forward,” he recalled. However, that positive spirit has since been broken, he said. Earlier this year, the church “pretty overwhelmingly” decided to sanction products made in Jewish settlements in the West Bank. “But what really emerged from this story was just how deep-seated the hatred is,” Love said. “It’s much more subtle now. But the cancer is no less ingrained.”

Love blames himself and other friends of Israel for failing to speak up. “Those of us with concerns just didn’t respond to the growing activism that was happening at local churches,” he told The Times of Israel in an interview. “In our denominational realities it’s fairly easy to work your way up the ladder to the highest court of our church with a fairly radical agenda. The senior leadership is the one that moved the latest action.”

But there is still hope, Love believes. “There is a huge gap between the views of the senior leadership and some activists, and the views of the vast majority of the people who sit in the pews on Sunday morning,” he said. “We need to equip those people sitting in the pews with another narrative about this whole question, not that narrative that they’re getting now, which is one-sided and unbalanced.”

Wilkinson, the reverend from England, on the other hand, was adamant that Mainline Protestant churches are a lost cause when it comes to their views of Jews. Speaking at the consultation on Monday night, he recalled attending an international conference organized by the pro-Palestinian Sabeel Ecumenical Liberation Theology Center a few years ago, which he said proved to him how deeply ingrained anti-Semitic notions are within some Christian denominations.

During the conference, Wilkinson witnessed how organizers and participants denounced Israel as an apartheid state guilty of ethnically cleansing the Palestinian people, and were told that there was never a Jewish Temple in Jerusalem. One speaker called the God of the Christian Zionists “the great ethnic cleanser, the genocidist,” and described the biblical Joshua as the “patron saint of ethnic cleansing,” Wilkinson said. Not one Protestant clergymen protested, he added.   In 2010, a Scottish Baptist minister gave a devotional address to members of the Scottish parliament, Wilkinson continued. “He spoke about the hope of Christmas being found in the birth of another Palestinian child, born a refugee, living under military occupation,” he recalled.

“I don’t recognize Jesus in the Protestant church today,” added Wilkinson, who wrote his dissertation about Christian Zionism and studied for some time at the International School of Holocaust Studies at Yad Vashem in Jerusalem. “What we’re finding now is a propaganda campaign being waged by the Palestinian Authority, the Islamic world and by the Protestant church, including the Evangelical church.”

Speaking about Islam, Wilkinson struck a particularly bitter note: “I understand the desire to engage in interfaith dialogue with the Islamic community. Of course there will be Muslims who are friends of Israel, friends of the Jewish people. But a leopard cannot change its spots,” he said. “The world is afraid to speak out and denounce what is so blatantly obvious — that this is a religion of hate, a religion of death, a religion of subjection and oppression. And there is no hope for that religion, even though there is hope for many Muslims.”

“What unites us is far more important than what divides us, especially against fundamentalist Islam whose god is a god of power, not love, and who preaches jihad and war. Islam does not have to be like that, and in the far past it was not,” he said at the consultation.

“Wahhabi Islam that has taken over the Middle East is not monotheism but mono-Satanism,” added Riskin, who founded the Center for Jewish-Christian Understanding and Cooperation. “We have to have a united voice that talks about a God of love; then perhaps, with Jewish and Christians united in this mission, we can teach it to the world and give strength to the moderate Muslims to join us.”   Jewish-Protestant relations have been troubled for decades, but the crisis worsened drastically last month after leaders of major Protestant groups sent a joint letter to Congress, calling on US lawmakers to reconsider military aid to Israel.

The letter speaks of “widespread Israeli human rights violations committed against Palestinians, including killing of civilians, home demolitions and forced displacement, and restrictions on Palestinian movement, among others.” The 15 signatories further stated that they saw “a troubling and consistent pattern of disregard by the government of Israel for U.S. policies that support a just and lasting peace.”

While the letter asserts that the Israeli government has “a right and a duty to protect both the state and its citizens,” the signatories nonetheless urge Congress “to undertake careful scrutiny to ensure that aid is not supporting actions by the government of Israel that undermine prospects for peace.”

“As Christian leaders in the United States,” the letter states, “it is our moral responsibility to question the continuation of unconditional U.S. financial assistance to the government of Israel,” which “will only serve to sustain the status quo and Israel’s military occupation of the Palestinian territories.”

Immediately after the letter’s publication, seven major Jewish organizations withdrew their participation from an interfaith meeting scheduled for later that month.

The so-called Christian-Jewish Roundtable was planed to take place on October 22-23, but the American Jewish Committee, B’nai B’rith International, the Jewish Council for Public Affairs, the Anti-Defamation League and other groups canceled their participation in protest over the controversial missive.   “In addition to being completely baseless, this letter demonstrates that all of our work, all of our dialogue, all of our goodwill and all of our Protestant partners’ pledges of commitment to coexistence amount to very little if such a letter can be sent to Congress without even the courtesy of a heads-up,” stated Rabbi Steven Wernick, the head of the United Synagogue of Conservative Judaism.

“There have always been ups and downs in the relations between Mainline Protestants and American Jews, but they have now hit a 45-year low,” Rabbi Eric Yoffie, the former president of the Union for Reform Judaism, wrote in an op-ed two weeks ago. “And this time, they may not recover.”   However, Christians United for Israel, a group that calls itself “one of the leading Christian grassroots movements in the world,” claimed the letter did not speak for mainstream Christianity, at least in the US.

“The vast majority of American Christians realize that when Israel confronts Hezbollah, Hamas and Islamic Jihad, it is confronting shared enemies on our behalf,” the group’s director, David Brog, said. “And the vast majority of American Christians know that while Israel — like the US — is not perfect, both of our nations are committed to fighting terrorism while adhering to the highest moral standards.”