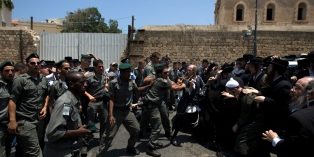 Less than 24 hours after Sudanese President Omar Bashir pledged “decisive steps against Israeli interests which are now legitimate targets,” for the destruction of the Iranian missile plant in Khartoum, Palestinian rocket teams early Sunday, Oct. 28, fired Grad missiles as target finders against Israel’s nuclear reactor in Dimona. This is reported exclusively by debkafile. They exploded on open ground in the Ramat Negev district southwest of the town of Dimona.

The nuclear plant is only 42.5 kilometers as the crow flies from the southern Gaza Strip.  Saturday night, the Israeli Air Force struck a Palestinian rocket team in the southern Gaza town of Khan Younes, killing one Hamas operative and injuring a second critically.

The Palestinian Hamas has evidently launched a new and expanded targeting-policy marking two developments of grave import: One: Its rulers have submitted the Gaza Strip to Tehran for use as its southern operational arm against Israel, complementing Hizballah’s pivotal role to the north of Israel; and two, having acquired improved surface missiles, Hamas is setting its sights firmly on the most sensitive locations within their reach, e.g., Israel’s nuclear reactor and air force bases and the American X-band radar station in the Negev.

The Islamist rulers of Gaza are expected to keep on trying to perfect their aim.

Israel’s defense ministry and high IDF command sounded at sea Sunday over this dangerous new departure. The IDF spokesperson started out by disclosing that one Grad rocket from Gaza had been aimed at the city of Beersheba, later raising the number to two, both of which exploded outside the city.

But the Grad launched against the nuclear reactor at 07:44 was followed by hours of official silence. Even then, the army spokesperson reported a missile fired against Ramat Hanegev in general terms, without mentioning the reactor’s location in that district at its northernmost point.
It was the second time in three weeks that Tehran was seen to be focusing on Israel’s nuclear plant, debkafile’s military sources note. On Oct. 6, an Iranian stealth drone which flew over Israel managed to photograph the reactor building and its air defense system’s radar. The data gathered was given to Hamas to help guide its first rocket attack on Dimona.

debkafile reported earlier that not two, but four, Grad rockets were fired Sunday morning at Beersheba. They all exploded outside the town and caused no casualties or damage.  The mayor decided to keep schools closed for the day since none are fortified against rocket attacks. Beersheba University stayed open for studies. Saturday night, the Palestinians shot a salvo of five Qassam rockets at the Eshkol district. Three exploded over the Gaza Strip; two on the border fence.

The Israel Air Force strike over Khan Younes followed this violation of the informal truce requested by Hamas and brokered by Egypt for the Eid al-Adha festival starting Friday and ending next Monday.