The limits of US Power 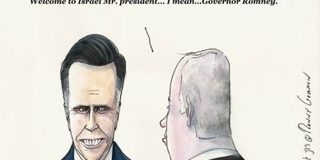 Monday’s US Presidential debate on foreign policy came and went. And we are none the wiser for it. Not surprisingly, at the height of the campaign season, neither US President Barack Obama nor his Republican challenger Governor Mitt Romney were interested in revealing their plans for the next four years.

But from what was said, we can be fairly certain that a second Obama term will involve no departure from his foreign policy in his current term in office.

As far as Iran and its nuclear weapons program is concerned, that policy has involved a combination of occasional tough talk and a relentless attempt to appease the mullahs. While Obama denied the New York Times report from the weekend that he has agreed to carry out new bilateral negotiations with Iran after the presidential elections, his administration has acknowledged that it would be happy to have such talks if they can be arranged.

As for Romney, his statements of support for tougher sanctions, including moving to indict Iranian President Mahmoud Ahmadinejad for the crime of incitement of genocide were certainly welcome. But they were also rather out of date, given the lateness of the hour.

If there was ever much to recommend it, the “sanction Iran into abandoning its nuclear weapons” policy is no longer a relevant option. The timetables are too short.

On the other hand, Romney’s identification of Iran as the gravest national security threat facing the US made clear that he understands the severity of the threat posed by Iran’s nuclear weapons program. And consequently, if Romney defeats Obama on November 6, it is likely that on January 21, 2013 the US will adopt a different policy towards Iran.

The question for Israel now is whether any of this matters. If Romney is elected and adopts a new policy towards Iran, what if any operational significance will this policy shift have for Israel?

The short answer is very little. To understand why this is the case we need to consider two issues: The time it would take for a new US policy to be implemented; and the time Iran requires to become a nuclear power.

And still, it took the US four weeks to plan and launch Operation Enduring Freedom in Afghanistan on October 7, 2001. That is, under optimal conditions, the US needed nearly a month to respond to the largest foreign attack on the US mainland since the War of 1812.

Then of course there was Operation Iraqi Freedom which officially began on March 20, 2003 with the US-British ground invasion of Iraq from Kuwait.

It took the administration until November 2002 to get the UN Security Council to pass Resolution 1441 which found Iraq in material breach of the ceasefire that ended the 1991 Gulf War. The US and Britain began repositioning ground forces and war materiel in Kuwait ahead of a ground invasion that month. It took more than four months for the Americans and the British to complete the forward deployment of their forces in Kuwait.

During those long months, other parties, unsympathetic to the US, Britain and their aims had ample opportunity to make their own preparations to deny the US and Britain the ability to win the war quickly and easily and so avoid the insurgency that ensued in the absence of a clear victory. So too, the four months the US required to ready for war enabled Iran to plan and begin executing its plan to suck the US into a prolonged proxy war with its surrogates from al Qaida and Hezbollah proteges.

A clear Anglo-American victory would have involved the location, presentation and destruction of Saddam’s weapons of mass destruction. And this Saddam denied them. By the time US ground forces finally arrived, despite massive telltale signs that such weapons had been in Iraq until very recently, no smoking gun was found.

In the long lead up to the US invasion, then Prime Minister Ariel Sharon warned that satellite data indicated that Iraq was transporting its chemical weapons arsenal to Syria. Sharon’s warnings fell on deaf ears. So too, a report by a Syrian journalist that WMD had been transferred to Syria was ignored.

According to a detailed report by Ryan Mauro at PJMedia.com from June 2010, after the fall of Saddam’s regime, the Iraq Survey Group charged with assessing the status of Iraq’s WMD arsenal, received numerous credible reports that the chemical weapons had been sent to Syria before the invasion. The stream of reports about the pre-invasion transfer of Iraq’s WMD to Syria have continued to intermittently surface since the outbreak of the Syrian Civil War last year.

In short, at a minimum, the time the US required to mount its operation in Iraq enabled Saddam to prepare the conditions to deny America the ability to achieve a clear victory.

This brings us to Iran. In the event that Romney is elected to the presidency, upon entering office he would face a US military leadership led by General Martin Dempsey that has for four years sought to minimize the danger that Iran’s nuclear weapons program poses to the US. Dempsey has personally employed language to indicate that he believes an Israeli preemptive strike against Iran’s nuclear weapons sites would be an illegal act of aggression.

Romney would face intelligence, diplomatic and military establishments that at a minimum have been complicit in massive leaks of Israeli strike options against Iran and that have so far failed to present credible military options for a US strike against Iran’s uranium enrichment sites and other nuclear installations.

He would face a hostile media establishment that firmly and enthusiastically supports Obama’s policy of relentless appeasement and has sought to discredit as a warmonger and a racist every politician that has tried to make the case that Iran’s nuclear weapons program constitutes an unacceptable threat to US national security.

Then too, Romney would face a wounded Democratic base, controlled by politicians who have refused to cooperate with Republicans since 2004. And he would face an electorate that has never heard a cogent case for military action against Iran. (Although, with the good will the American public usually greets its new presidents, this last difficulty would likely be the least of his worries.)

At the UN, Romney would face the same gridlock faced by his two predecessors on Iran. Russia and China would block UN Security Council against the mullocarcy.

As for the Arab world, whereas when Obama came into office in 2009, the Sunni Arab world was united in its opposition to a nuclear-armed Iran, today Muslim Brotherhood ruled Egypt favors Iran more than it favors the US. Arguably only Saudi Arabia would actively support an assault on Iran’s nuclear weapons sites. All the other US allies have either switched sides, or like Jordan, Kuwait and Bahrain are too weak to offer any open assistance or political support. For its part, Iraq is already acting as Iran’s satrapy, allowing Iran to transfer weapons to Bashar Assad’s henchmen through its territory.

All of this means that as was the case in Iraq, it would likely take until at least the summer of 2013, if not the fall, before a Romney administration would be in a position to take any military action against Iran’s nuclear installations.

And it isn’t only US military campaigns that take a long time to organize. It also takes a long time for US administrations to change arm sales policies. For instance, if a hypothetical Romney administration wished to supply Israel with certain weapons systems that would make an Israeli strike against Iran’s nuclear installations more successful, it could take months for such deals to be concluded, approved by Congress, and then executed.

This then brings us to the question of where will Iran’s nuclear weapons program likely stand by next summer?

In his speech before the UN General Assembly last month Prime Minister Binyamin Netanyahu said that by next spring or at the latest next summer Iran will have reached the final stage of uranium enrichment and will be able to acquire sufficient quantities of bomb grade uranium for a nuclear weapon within a few months or even a few weeks.

Netanyahu said that the last opportunity to prevent Iran from acquiring nuclear weapons will be before it reaches the final stage of uranium enrichment — that is, by the spring. At that point, a hypothetical Romney administration will have been in office for mere months. A new national security leadership will just be coming into its own.

It is extremely difficult to imagine that a new US administration would be capable of launching a preemptive attack against Iran’s nuclear installations at such an early point in its tenure in office. Indeed, it is hard to see how such a new administration would be able to offer Israel any material support for an Israeli strike against Iran’s nuclear installations by next spring.

So this leaves us with Israel. Over the past several weeks, there has been a spate of reports indicating that Israel’s military and intelligence establishments forced Netanyahu to take a step back from rhetorical brinksmanship on Iran. Our commanders are reportedly dead set against attacking Iran without US support and still insist that Israel can and must trust the Americans to take action to prevent Iran from acquiring nuclear weapons.

There is great plausibility to these reports for a number of reasons. The intelligence and military brass have for years suffered from psychological dependence of the US and believe that Israel’s most important strategic interest is to ensure US support for the country. Then too, in the event that an Israeli strike takes place against the backdrop of a larger military confrontation with Iran’s proxies in Syria, Lebanon and Gaza, Israel would likely require rapid resupply of arms to ensure its ability to fend off its enemies.

But when we consider the political realities of the US — in the event that Obama is reelected or in the event that Romney takes the White House — it is clear that Israel will remain the only party with the means — such as they are — and the will to strike Iran’s nuclear installations. Israel is the only country that can prevent this genocidal regime with regional and global ambitions from acquiring the means to carry out its goals.