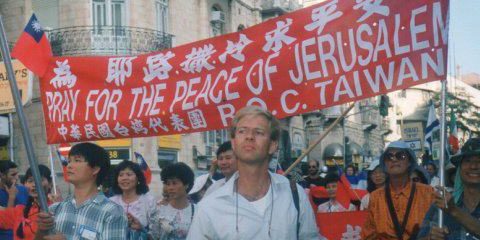 I met an elderly Christian lady in Atlanta last year whose words still ring loudly in my head.  The frail but feisty lady had a cast on her arm and so I told her I hoped she feels better soon and may God bless her.  Without missing a beat, “I’m already blessed,” she replied, “God blesses me because I bless Israel.”  The church where I met her, on a busy Atlanta street, not only proudly displays eight Israeli flags on their front lawn, but a banner broadcasting Genesis (12:3) which for many Christian Zionists is their main mantra, and for many Jews, is known as the beginning of this week’s Torah portion, Parshat Lech Lecha.

God’s famous first words to Abraham command him to seek out the Promised Land, “Go from your land, your father’s home and your birthplace to the land that I will show you.” God continues by offering a guarantee that, “I will bless those who bless you and curse those who curse you.”  Millions of Christians take those words seriously and literally, doing everything they can to “bless” the State of Israel and the Jewish people in order to reap His reward and benefit from His blessing.  It is with the Divine promise to Abraham in mind that hundreds of thousands of Christian tourists travel each year to Israel offering vital support to the Israeli economy and why millions of others from all over the world offer philanthropic and political support to the Jewish State.

Throughout history, Genesis 12:3 has been one of those Divine laws of nature.  Countries that have welcomed Jews in have been blessed with material wealth and success.  But as soon as those very same countries turn their backs on the Jews and embrace discrimination and persecution, their days are numbered.  God’s blessings invariably turn into curses, and those nations are shoved off the world stage in one way or another, becoming just another footnote in history.

Some Jews don’t know what to make of Christian support for Israel and often respond with profound suspicion, if not outright hostility.  “What is really their agenda?” they ask; “what is really motivating them?” they want to know.  My brief conversation with that little old lady demonstrated to me that their agenda is simply trying to earn God’s grace.  Their motivation is no more complicated or devious than trying to understand why Abraham listened to the Lord in the first place.

Sure, it’s hard for many Jews to believe that after centuries of church instigated “curses” directed towards our people, millions of Christians are suddenly so interested in becoming a source of blessing.  However, we know that the Lord has a plan for this world.  The promise to Abraham concludes, “and all the families of the earth shall bless themselves through you.”  We’ve been waiting so long for these times.  Now that millions of Christians worldwide are looking to actualize His plan and bless the Jewish people, our response should not be one of cynicism, but of awe and appreciation.

Rabbi Tuly Weisz is the founder of Israel365, a non profit organization that promotes the beauty and Biblical significance of Israel each day. To sign up for a daily dose of Israel inspiration, please visit www.Israel365.co.il.