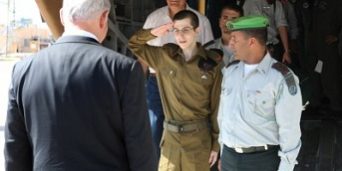 The people of Gaza rejoiced Thursday, as they commemorated the one year anniversary of what they perceive as a victory — Israel’s freeing of 1,027 prisoners in exchange for the release of captured IDF soldier Gilad Shalit, held captive by terrorists for five years.

As part of the celebration, Hamas’s television station aired a movie portraying the operation that led to the capture of Shalit.

The 45-minute film details the entire operation and is based on the testimony of Hamas terrorists who took part in the kidnapping. It features Arab commentators praising what they describe as the sophistication and intelligence of the terror organization. A number of top Hamas officials and prisoners who were freed in the swap were interviewed in the beginning of the film as well.

“We had to take strong action to prove that the resistance was still strong,” said one of Shalit’s abductors, Abu Saleh. “The place where we chose to carry out the attack was selected after observations and long follow-ups.”

“The post we selected was difficult to access,” said Abu Ziad, the photographer who took part in preparations for the attack. “We photographed the post in a very precise way, noting the movement of the troops and the places within the post where they slept.”

After an agreement was met on where to carry out the attack and who would be chosen to participate, it was decided that training would need to be conducted in order to carry out such a massive operation, Ziad is heard saying in the movie’s soundtrack, as images of Hamas terrorists undergoing training are broadcast across the screen.

“As part of the practice, we also trained to capture the post and trained for the use of urban warfare so that the Jihad fighters would be prepared for any scenario during the operation,” said some of those who took part in the attack, as a backdrop of images of two terrorists who were killed in the operation was displayed.

All those involved in the attack received two free vacation days before the mission and were forbidden to have contact with any outside force that might affect their mindset and derail the mission.

According to the film, the terrorists then began digging a tunnel in order to reach the Kerem Shalom outpost. “The tunnel was dug parallel to the border in order to monitor any activity along the border,” said Ziad.

As the terrorists received the go ahead to carry out the operation, they caught the IDF by surprise, “We opened fire on the soldiers, we killed a few of them and we hit their watch tower as well.”

Then, according to pictures shown, a few of the terrorists charged a tank that had been hit by fire. Pictures from the film imply that Shalit turned himself over to the terrorists after they pointed a gun at him and threatened to kill him. The IDF has not publicly acknowledged whether this version of events is true, but Israeli investigations into the attack paint a different picture.

At the end of the film, Hamas officials praised the kidnappers and the “sophistication” of the operation and vowed to work for the release of more jailed terrorists.