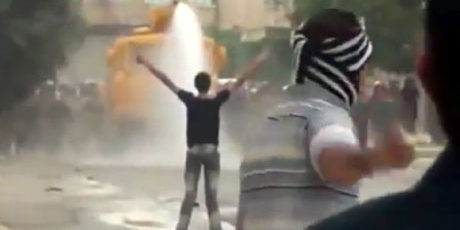 As Israel’s military watches Syrian sovereignty crumble and scores of militant groups form in the resulting vacuum, it is on alert for jihadi terrorist attacks from Syria.

The working assumption in Israeli defense circles is that sooner or later, Assad will fall, and Israel will have to deal with whatever will replace him.

The topping of Basher Assad will break the Tehran-Damascus-Beirut axis, which has seen Syria act as the critical bridge linking Iran to Hezbollah.

Should Syria’s Sunni-majority succeed in putting together a new government, it will accurately view Iran and Hezbollah as aiders and abettors in the massacres perpetuated against tens of thousands of Sunni civilians who tried to overthrow Assad.

A Sunni Syria will, however, in turn take its place in a new radical Sunni bloc of Middle Eastern states, and link up with the Muslim Brotherhood-ruled Egypt, Hamas in Gaza, and Islamist Turkey.

The new Sunni Islamist bloc will be every bit as hostile to Israel as the Iranian-Syrian-Hezbollah axis, but also marked, in Syria and Egypt, by instability and power vacuums that will allow Salafi jihadi groups to do as they please.

Whether Syria disintegrates into warring sectarian mini-states, or transforms itself into a Sunni Islamist state, the outlook for regional security is not especially sunny.

An illustration of how edgy the situation is can be found in an incident on the border in recent days: an IDF lookout identified dozens of armed Syrians in civilian clothing approach the Israeli border.

It was not immediately clear who the armed men were – were they rebels engaging the Syrian army (the civil war has gotten so close to the Israeli border that IDF soldiers are saying they can hear mortar shells explode in Syria), or were they militant Islamist forces testing the IDF’s response?

Taking no chances, the IDF evacuated the top of the popular Mount Hermon area, which, during the Jewish holiday season, is usually brimming with visitors.

Although the incident has passed, the danger has not; and the IDF’s Military Intelligence has predicted that an attempted attack on an Israeli target from one of the growing number of radical forces operating in Syria is only a matter of time.

Combat forces stationed in the IDF’s Northern Command, including infantry and armored divisions, have therefore been working closely with Military Intelligence to prepare for a rapidly changing environment.

Military Intelligence has been briefing commanders of Israeli armored vehicle brigades in the north on the new threats.

Gone are the days when the threat was primarily the centralized, hierarchical, Syrian army. Now, the threats are irregular terror militias armed with explosives, shoulder-held grenade launchers, roadside bombs, anti-tank missiles, and a range of firearms.

Once the intelligence is received, commanders on the ground must use the new information to create new contingency plans and new deployment patterns.

As the recent escalation between Turkey and Syria has demonstrated, the IDF must also continue to worry about the possibility of a confrontation with regular Syrian forces,.

With the Assad regime feeling its back to the wall, there is no way to know how the situation might proceed: decisions that now seem self-destructive from Syria’s perspective, such as creating provocations with neighbors, or even a misfired shell (as with Turkey), could set off a chain of unpredictable events.

To ensure that it can quickly mobilize its Artillery Corps to the Syrian front, the IDF held a surprise and vast live-fire exercise on the Golan Heights in recent weeks. During the drill, Artillery Corps soldiers were, without warning, airlifted from their routine security missions in the West Bank to the Golan Heights, where they assumed their positions and began firing at virtual targets.

The IDF is satisfied with the result of the drill: it proved to itself that it can quickly mobilize its heavy firepower and begin to shell targets at a moment’s notice.

Standing Arab armies were a bigger threat to Israel’s security, but because they were controlled by central governments, Israeli deterrence against that threat proved effective for decades.

Although the same deterrence is now in effect against terror organizations which have seized territory and power – Hamas and Hezbollah – the al-Qaeda-inspired terror organizations cannot be deterred. Once Assad falls, the radical elements can raid Syrian military bases, arm themselves with a range of devastating weapons, and turn their sights to the Israeli border.

So the Arab winter continues to take shape.