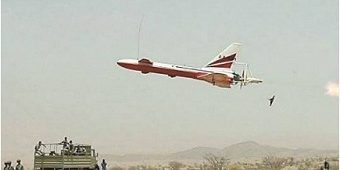 Several Israeli warplanes violated Lebanon’s airspace Sunday, according to Lebanese media outlets, flying over the country’s southern region and setting off sonic booms in a possible response to Saturday’s violation of Israeli airspace by an unmanned drone which Israel has speculated was launched by Hezbollah.

Residents in the eastern area of south Lebanon told Lebanon-based The Daily Star that Israel Air Force jets flew over their areas at a low altitude, while Lebanese security sources said the warplanes covered the entire region.

The jets, which were reportedly accompanied by several helicopters, also reached the airspace over the coastal city of Sidon, the sources said.

On Saturday, an Israel Air Force F-16i fighter jet shot down a foreign unmanned aerial vehicle over the Hebron Hills after it had hovered over Israeli territory for half an hour, raising questions about who sent it and for what purpose.

An Israel Defense Forces spokesperson refused to comment on the origin or mission of the drone, though foreign media outlets speculated that it was shot down due to its proximity to the nuclear reactor in Dimona.

The UAV was identified and monitored by the army before it had crossed into Israeli territory from the Mediterranean Sea and Gaza Strip, according to the IDF spokesperson. It is believed that the drone was not launched from Gaza.

IAF F-16i’s were scrambled to the drone’s location and followed it until the order to shoot it down was given. Based on the size of the explosion from the drone’s interception, the IDF believes that it did not carry explosives, and that its purpose was likely to gather intelligence.

Prime Minister Benjamin Netanyahu praised the IDF for its management of the incident. “We will continue to defend our borders at sea, land and air to protect the citizens of Israel,” he said.

Defense Minister Ehud Barak praised Chief of General Staff Lt. Gen. Benny Gantz and IAF Commander Maj. Gen. Amir Eshel for what he called the “swift and precise” tracking and shooting down of the UAV. “We take this attempt to violate Israel’s air space very seriously and are weighing our options for a response.”

IDF Spokesperson Brig. Gen. Yoav Mordechai emphasized that “throughout its flight over Israel the drone was in constant eye-sight of air and ground forces” and noted that the drone was shot down “for the sake of the northern Negev residents’ safety.”

Soldiers were deployed to the area to collect the debris from the destroyed aircraft.

The IDF, meanwhile, has been keeping a close eye on Israel’s neighbors’ UAV programs, at the vanguard of which stands Iran. During the 2006 Second Lebanon War, the IAF intercepted a Hezbollah UAV that was developed by the Islamic republic. Hezbollah attempted several UAV infiltrations during the war; one drone crashed inside Lebanon due to a presumed technical problem, while the others were intercepted by the IAF.

Hezbollah attempted to enter Israeli airspace with drones before the war, as well. In April 2005, a UAV was launched and flown between the cities of Acre and Nahariya in northern Israel, and then landed successfully in southern Lebanon. In November 2004, a Hezbollah drone infiltrated Israeli airspace, took photos of Israeli communities in the north, and made its way back to Lebanese air space before crashing into the Mediterranean. The drone managed to fly over Israeli territory for 15 minutes and was not detected by IDF radars.

In 2010, the IAF shot down an unidentified hot air balloon flying in southern Israel after it hovered close to the Dimona nuclear plant’s airspace.