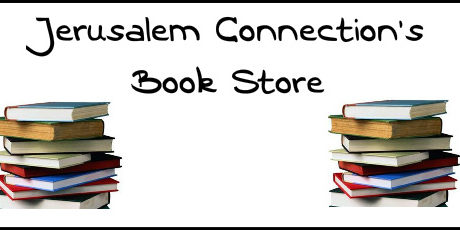 Welcome to our online book store where you can find a great selection of excellent reading. All of our products are for a suggested donation so the proceeds help support our ministry and work for Israel. Free shipping on everything!

Prophetic Destinies: Who is Israel? Who is the Church?
by Derek Prince

Derek Prince has often been described as one of the greatest Christian thinkers of the 20th Century.  According to his story, he stood at the Mount of Olives in 1946, before the state of Israel was born, and was struck by the realization that if you detach the Bible from its geographical setting in Israel and take away the theme of the people of Israel, then the Scripture becomes meaningless.   In this book, Prince writes “Christians from Gentile backgrounds owe their entire spiritual inheritance to Israel.  One appropriate way for them to acknowledge their indebtedness is to stand by Israel in the midst of their present pressures, and to uphold them with faithful intercession.”  Suggested Donation: $20.00

Like a ghost returning, the modern state of Israel is a thoroughly astonishing reality. Built on the ruins of ancient cities and villages, Israel today is a thriving democracy, in spite of the relentless terror war waged against it by radical Islamic groups. Former Knesset member Binyamin “Benny” Elon is a moral voice in Israel’s government, and this new book is certain to find a wide audience among his country’s advocates, like America’s evangelicals. A brilliant mixture of Israel’s current political and security situation, contrasted with its ancient biblical heritage, makes God’s Covenant with Israel an irresistible book. Suggested Donation: $20.00

The Last Exodus
by Dell Sanchez

This is the sad story of a people that has been persecuted and hunted down for so many centuries that they no longer know who they or their fathers really are.  This is the best kept secrent in 500 years, one that is due to be exposed now.  This is the true story of the other side of 1492.  This is a book about unveiling the ugliness of the past only to confront it with a remorseful and forgiving spirit. Suggested Donation: $20.00

This is a two-fold rendition of history and traditions relating to Hispanic/Latinos with a Sephardic Jewish heritage. It tracks the family of a famous Sephardic Jew, Don Luis de Carvajal and his extended family across Spain and Portugal into Mexico and the Southwest of the USA. It reveals the ugliness of the Inquisitions’ tortures that were used to convert them to Roman Catholicism and how the Spanish Inquisition was transplanted into Mexico City with tentacles across all of Latin America including New Mexico. The second part of this book categorizes ten lists of Sephardic surnames that intersect with many of today’s Hispanic Jews of the Southwest. It reveals practices, customs and terms that were traditional to them for many centuries. Suggested Donation: $20.00

Your people shall be my people
by Don Finto

“Your people shall be my people, and your God, my God” (Ruth 1:16). Like Ruth in the Old Testament, every Gentile believer has come out of the land of famine and into the spiritual realm of abundance in the name of Jesus. But unlike Ruth, we have turned our backs on the Jewish people, the relatives of the Messiah. We need to confess personally and corporately on behalf of the Church for centuries of persecution of the Jewish people, looking in these days for every opportunity to bless and not curse them. Once again, Israel and her people are center stage at a crucial moment in world history, and this book shows why the Church must effect reconciliation and why our prayers are vital in this hour. If we will make the same covenant pledge to Israel that Ruth made to Naomi, the Church will never be the same! Suggested Donation: $20.00

Conspiracy in Mecca: What you need to know about the Islamic Threat
by David Earle Johnson

A concise view of Islam’s history and ideology. This is a must read for anyone watching events unfold in the Middle East. Author David Johnson is a gifted author on the subjects of Israel and Islam. He has made more than sixty visits to Israel and has spent over forty years studying Islam in Israel, the Middle East, Europe, and the United States. Suggested Donation: $20.00

Match made in Heaven
by Zev Chafets

Over the course of an extraordinary year, Zev Chafets—former New York Daily News columnist and onetime director of the Israeli government press office—traveled the world to explore the improbable confluence of Jews and evangelicals. He spent quality time with Jerry Falwell, visited Jewish cadets at West Point, attended the world’s biggest Christian retail show, embarked on a road trip with the rabbi with the largest gentile following since Jesus, journeyed to the Holy Land with a band of repentant Christian pilgrims, and broke bread with George W. Bush and five hundred fellow Jewish Republicans. Suggested Donation: $25.00

Hebrew for the Goyim
by Pat Mercer Hutchens

Each letter of the Hebrew alphabet was first a picture with a purpose, a drawing with meaning. Yes, there are codes in the Bible. They go back to the beginnings, to Egyptian hieroglyphs and to Phoenician, Middle Eastern and Hebrew alphabets, from which most languages emerged. For seekers or anyone interested in origins, alphabets or the Bible, Hebrew for the Goyim is the book for you. Suggested Donation: $25.00

An amazing story of faith amidst the horrors of the Holocaust, The Hiding Place has a richly-deserved place among the “Christian classics.” In this autobiographical account, Corrie ten Boom tells of her family’s attempt to save Dutch Jews from a Nazi roundup – until their efforts were discovered and the entire family sent to a concentration camp. Her father and sister would die in captivity, but Corrie would survive to write, preach, and personally share the story of God’s love and forgiveness – even to her former Nazi captors! Now in a deluxe collector’s edition, this unabridged classic will thrill readers of all ages. Suggested Donation: $15.00

“Van Paassen writes with the power and fervor of a latter-day prophet, without forgetting the need for facts, figures and documentation.” – Review of Chicago Sun Times.  Van Paassen, a well known and successful journalist after World War I, spent quite some time in “Palestine” and wrote extensively for his newspapers and wrote many books and articles on the subject. When one reads this book today, one notices how profound and ironic it is, that the times which Van Paassen describes of his generation are now repeating themselves, the only differences are the players’ names. Suggested Donation: $20.00

Key problems, conflicts, and decisions in Israel’s past and present are analyzed in this fully documented, dramatic history of the turbulent events that have shaped the crisis in the Middle East. From the questionable policies of the British, both in the Mandate era and in 1948, to the debate over the return of territories won in the Six-Day War and the war of attrition that spills over into the rest of the world, this book carefully examines Israel and its relationship to the rest of the Middle East as well as the rest of the world. Suggested Donation: $20.00

God, Israel, and Shiloh: Returning to the Land
by David Rubin

“God, Israel, and Shiloh” is a gripping biblical and historical saga about the Land of Israel and the Jewish people. After reading this book, you will gain a new understanding of both the religious and political perspectives of the Jewish people who live in the Biblical heartland of Israel. Learn who the “settlers” are. Learn where and what is the “West Bank.” Learn the truth about the people who are often referred to as “the chosen people” and how it is that Israel is a nation struggling with its destiny to be “a light unto the nations.” God, Israel, and Shiloh is written with moving personal stories, psychological insights, and compelling political commentary.  Suggested Donation: $20.00

Standing with Israel
by David Brog

The phenomenon of evangelical Christian support for Israel has garnered increasing media attention in recent years. Yet almost all of this coverage has been shallow and skeptical. Few have bothered to go beyond recycling the conventional wisdom. David Brog went behind the headlines to find the truth about Christian Zionism. By spending time with Christian Zionists, attending their churches and events, and reading their books and publications, Brog discovered the real motives and goals of an increasingly powerful political movement. In the process, Brog became convinced he was tapping into something far deeper than politics. Brog, a Jew, came to believe that he was witnessing the birth pangs of a Christian/Jewish reconciliation that has been over two millennia in the making. In this important book, David Brog stands the conventional wisdom about Christians and Jews on its head. In so doing, he helps to further the very reconciliation he seeks to chronicle. This book is required reading for anyone who cares about the future of Christian/Jewish relations and the State of Israel. Suggested Donation: $25.00