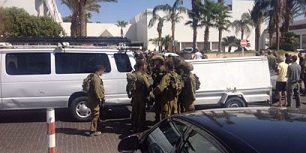 A man suffered fatal gunshot injuries Friday after a US national opened fire inside the lobby of Leonardo Club Hotel in Eilat. The gunman, who was fired from his job on Thursday, is believed to have arrived at the hotel to avenge his dismissal, according to the police.

The victim has been identified as 33-year-old Armando Abed, from Mi’ilya, a local council in the western Galilee; who was employed at the hotel as a sous-chef.

The gunman was identified as William Hershkovitz, 24, a Jewish man from New York City, who arrived in Israel as part of the “Oranim” Israeli-American work exchange project. The police confirmed that the gunman was fired from his job on Thursday.

“This was a criminal act,” said Acting Deputy Inspector General David Bitan of the South District Police. “The man was fired yesterday. He shot at cops and put everyone in danger, which is why the Counterterrorism Unit returned fire.”

The police stressed that the circumstances surrounding the incident are criminal, and that no national security violations were at play.

Aside from the two casualties, several others have suffered shock and were taken to the Yoseftal Medical Center in the southern resort city.

Large police forces and emergency services arrived at the scene as soon as the incident was reported to the police emergency line.

Available details suggest that the shooter had an altercation with another hotel employee. A hotel security guard tried to intervene, at which point the man grabbed his weapon and opened fire.

The Police Counterterrorism Unit was given command of the situation and once it was made clear that the shooter had barricaded himself in the hotel, special forces stormed the premises. The shooter was killed during the operation.

Hotel guests were instructed to stay inside their rooms while the event was in progress, for their own safety.

Eilat Police Spokesman Chief Inspector Lior Ben-Simon told Ynet that “Eilat’s security forces are on high alert because of the holiday. The response time to the incident was quick.”

Fired due to co-workers’ complaints

Natan Sharansky, chairman of the Jewish Agency, has ordered the formation of a commission of inquiry to investigate the shooter’s admission into the Oranim program.

According to the project’s website, the program is affiliated with “Masa Israel Journey” – a joint project of the government, the Jewish Agency, the Jewish Federations of North America and the United Israel Appeal (Keren Hayesod).

Hershkovitz was dismissed after hotel staff complained about him, according to the project’s organizers.

“He was a university graduate who was active in the Jewish community,” a source in the program said. “The hotel management’s complaints were of professional and disciplinary nature. The complaints weren’t about criminal activity.”

One of the things that bothered the management, the source said, was Hershkovitz’ tendency to eat at the hotel cafeteria while still wearing his uniform, which is prohibited.

The Israel Way company, which manages the program, said that Hershkovitz fulfilled all the enrollment requirements, and his medical history deemed him fit to participate. He arrived in Israel on August 27 for a five-month stay, during which he was set to work at the hotel, take part in trips across the country and study Hebrew. He was part of an 80-member group.

As per the organizers’ decision, Hershkovitz was supposed to return to the US on Tuesday, or alternately go live with relatives in Israel. His family refused to comment.

Hassan Shaalan and Omri Efraim contributed to this report