'To annihilate Israel we need 24 hours, an excuse' 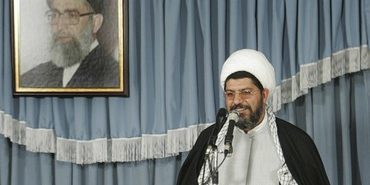 In his first public interview in a year, reported in the Persian-language Jahan News, which is close to the regime, Shirazi said if Israel attacked Iran, the Islamic Republic would be able to turn the conflict into a war of attrition that would lead to Israel’s destruction.

“If such a war does happen, it would not be a long war, and it would benefit the entire Islamic umma . We have expertise in fighting wars of attrition and Israel cannot fight a war of attrition,” Shirazi said, referring to Iran’s eight-year war of attrition against Iraq.

Khamenei appointed Shirazi a year ago as his representative to the Qods Force, the highly secretive extraterritorial wing of the Islamic Revolutionary Guards Corps, which reports directly to Khamenei.

The Qods Force, whose exact size is unknown, is responsible for IRGC operations outside Iran, including in Syria.

In August, the US Department of the Treasury identified the Qods Force as “a conduit for Iran’s material support to the Syrian General Intelligence Directorate,” and in 2011 designated Qods Force commander Maj.-Gen. Ghassem Suleimani as a terrorist for his personal support of the Syrian regime.

In his interview, Shirazi said that Israel was “close to annihilation” and wanted to attack Iran as an act of desperation.

“Are our enemies intelligent, wise or foolish? They are foolish. It’s also possible that they will do this foolish thing . Why do we sometimes say this is the strongest probability? Because today the Israelis are telling us that ‘we are not the Israel of yesterday, we are getting weaker day by day and the Islamic Republic is getting stronger day by day,’” he added.

“Well, when Israel finds itself in danger of extinction, it flails around, and so it’s easy for it to do foolish things and will start a war just to sting Iran.”

Shirazi’s remarks echo those of other senior Iranian military leaders, who have repeatedly threatened to respond to any attack by the US and its allies on its nuclear facilities by engaging in a war of attrition.

Iran has also repeatedly paraded what it claims are advances in military technologies, including in ballistic missile technologies, which could be used in such a war.

Significantly, in his interview, Shirazi also denied reports that Suleimani had been killed in the July 18 bombing in Damascus, which killed several of Syrian President Bashar Assad’s top aides.

Although Suleimani has not appeared in public since the bombing, the Iranian state media later published what it claimed to be a photograph of the Qods Force leader attending a July 24 address by Khamenei.

And while a spokesman for the IRGC also dismissed reports of Suleimani’s death, around 10 day ago the Iranian Students’ News Agency published what it alleged was a 1989 interview with the Qods Force commander that included extremely detailed biographical information – an unusual move, especially given that little is known about Suleimani.

Ali Alfoneh, an expert on the IRGC from the American Enterprise Institute, questioned why the Islamic Republic would allow its media to release such private information now.

“Is Suleimani really dead and is this article an attempt to beatify a martyr? It may take some time before we will know the answer, but one thing is for sure: If Suleimani indeed was killed in Damascus, the regime would not admit it.

“The regime is therefore likely to stage Suleimani’s assassination by an obscure terrorist organization inside of Iran.

Helping the Assad regime to kill women and children in Syria is hardly a legacy the state propaganda machine wishes for its martyr,” Alfoneh wrote.