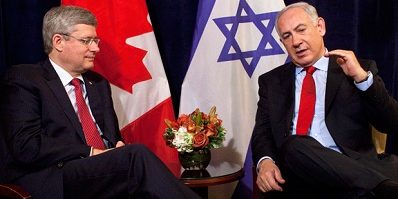 The morning after issuing another passionate defence of Israel and sharply rebuking Iran, Prime Minister Stephen Harper sat down Friday with his Israeli counterpart to discuss the “danger the Iranian regime ultimately presents to us all.”

Harper and Benjamin Netanyahu met in a tiny hotel room in mid-town Manhattan to delve into the Iranian situation the day after the Israeli prime minister urged the world to draw a “red line” to stop the Iranians from building a nuclear bomb.

“Our country has not been shy about warning the world of the danger the Iranian regime ultimately presents to all of us,” Harper said in brief remarks in front of a crush of Canadian cameras before the men held their private, 30-minute discussion.

“We want to see a peaceful resolution and we work closely with our allies to try to alert the world to the danger this presents and the necessity of dealing with it.”

Netanyahu praised Harper for his recent decision to close the Canadian embassy in Tehran.

“I think what you did, severing ties with Iran, was not only an act of statesmanship but an act of moral clarity,” he told the prime minister.

“The fact that you took such clear, decisive steps is a great example to be followed by other nations, many of which attended a conference in Tehran and said nothing.”

He added to the assembled Canadian media: “He’s a great champion of freedom and a great friend of Israel.”

Sitting against a backdrop of Canadian and Israeli flags, Netanyahu also reiterated what he told the United Nations General Assembly on Thursday.

The world must put into practice its attempts to stop Iran from enriching enough uranium to build a nuclear weapon, he said.

“And that means setting red lines on their enrichment process. It’s their only discernible and vulnerable part of their nuclear program. If such red lines are set, I believe that Iran will back off.”

In front of a VIP-packed American audience on Thursday night, Harper took a swipe at the United Nations and assailed Iran while picking up an international statesman award.

After skipping speaking at the United Nations General Assembly again this year, Harper suggested the UN has too often wooed dictators despite their appalling human rights records and sinister aims.

Canadians expect their governments to act for “the wider interests of humanity,” he told the reception at the glitzy Waldorf Astoria hotel after receiving his award from the Appeal of Conscience Foundation.

“That is, of course, not the same thing as trying to court every dictator with a vote at the United Nations, or just going along with every international consensus, no matter how self-evidently wrong-headed.”

Just a few blocks away at the United Nations complex, hundreds of world leaders have been gathered all week discussing the biggest global issues of the day, including the situation in Syria, the ominous dispute between Israel and Iran and the eruption of anti-American violence in the Middle East.

The prime minister pulled no punches in his own remarks about Iran after he accepted the foundation’s “world statesman” award from storied U.S. statesman Henry Kissinger, Richard Nixon’s one-time secretary of state.

The civilized world must not “shrink from recognizing evil in the world for what it is. Our government simply contends that the international community must do more to further pressure and isolate this regime,” Harper said.

He received a standing ovation when he told the packed ballroom that the world must speak out against the Iranian regime and “speak in support of the country that its hatred most immediately threatens — the state of Israel.”

He added: “In supporting Israel, we don’t sanction every policy its government pursues. When, however, it is the one country of the global community whose very existence is threatened, our government does refuse to use international fora to single out Israel for criticism.”

Harper has faced a barrage of criticism back home for his decision to opt out of speaking to the UN again this year. Critics say he should work participate fully in the UN to promote Canada’s message on the Iranian situation.

But he says it’s not standard procedure for the Canadian prime minister to address the General Assembly every year. The UN has met seven times since he was elected; Harper’s spoken twice, in 2006 and in 2010.

In his place, Foreign Affairs Minister John Baird will address the UN on Monday.