Iran: 'Strike a chance to wipe Israel off map' 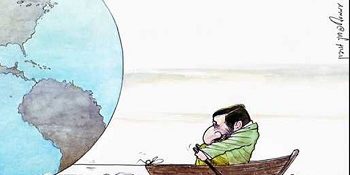 “If the Zionists act against Iran it will be a historic opportunity for the Islamic Revolution to wipe them off the world’s geographic history,” Deputy Commander of Iran’s Revolutionary Guard Brig.-Gen. Hossein Salami declared Sunday.

According to the Fars news agency, Salami stressed that Iran is “No longer concerned by the Zionist regime’s threats” to strike the country’s nuclear facilities.

“If war with Iran breaks out it will be the doing of an international coalition headed by America,” he said.

Iran’s Aerospace Force Commander Amir Ali Hajizadeh further warned that Tehran could launch a preemptive strike against Israel if it becomes convinced that  Jerusalem was gearing to attack it.

Speaking with Iran’s Al-Alam TV, Hajizadeh said: “Iran will not start any war but it could launch a preemptive attack if it was sure that the enemies are putting the final touches to attack it.”

Hajizadeh said any attack on Iranian soil could trigger World War III: “We cannot imagine the Zionist regime starting a war without America’s support. Therefore, in case of a war, we will get into a war with both of them and we will certainly get into a conflict with American bases.”

“In that case, unpredictable and unmanageable things would happen and it could turn into a World War Three.”

Earlier Sunday, a senior Iranian MP said that if Tehran will end up cutting ties with the IAEA, its chief, Yukiya Amano, will be the one to blame: “Amano’s frequent visits to Tel Aviv prove that the information about the Iranian nuclear program is given to the Zionist regime (by him).

Javad Jahangir-Zadeh, a member of Iran’s parliamentary committee on national security and foreign policy, added that if the IAEA “continues in its ways,” Tehran would be forced to sever all ties with it.

On Saturday, Revolutionary Guards Commander General Mohammad Ali Jafari said that a war between Israel and Iran was inevitable.

“Israel seeks war with us, but it’s not clear when the war will occur,” Jafari was quoted by the ISNA and Fars agencies as saying. “Right now they see war as the only method of confrontation,” he said.

Iran also threatened to attack US bases in event of war: Hajizadeh warned Sunday that the Islamic Republic will target US bases in the Persian Gulf should a war with Israel break out.

Hajizadeh said that no Israeli attack can happen without the United States’ involvement, making all US military bases a legitimate target.

He warned that Gulf states would be “dragged into war” because Iran will attack US bases in Bahrain, Qatar and Afghanistan.