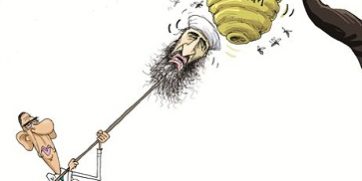 In Libya, U.S. Ambassador Christopher Stevens and three colleagues were murdered Tuesday. Earlier that day, protesters in Egypt stormed the U.S. embassy and tore down the American flag.

It was “the day the roof fell in,” proclaimed blogger and historian Walter Russell Mead. Barack Obama’s “efforts to reconcile the U.S. and moderate Islamism — in part by distancing the U.S. from Israel — have angered Israel without reducing Islamist bitterness against the United States.”

In other words, his Middle East policies are in shambles. His assumption that a president “who doesn’t look like other presidents” would endear America to Arabs has been proven unfounded.

So have other assumptions. Like the idea that Iran’s mullah regime would negotiate with us if we uttered soothing words and turned a cold eye on Iranian dissidents, as Obama did in June 2009.

And the idea that creating distance between the United States and Israel would lead to a settlement between Israelis and Palestinians.

Obama came to office believing that America had a lot to apologize for. For the “tension” between the U.S. and the Muslim world that “has been fed” by colonialism and the Cold War, as he said in his June 2009 “New Beginning” speech in Cairo.

There, he implicitly contrasted George W. Bush’s emphasis on universal human rights by admitting that “America does not presume to know what is best for everyone.”

Since the 9/11/12 attacks on America, Muslims have been protesting over much of the world, from Tunisia to Yemen to Bangladesh, and in some cases, have been assaulting our embassies.

The ostensible reason for the protests is a video produced by someone in the United States criticizing the Prophet Muhammad. But that’s obviously just a pretext, used by Islamist terrorist organizers to whip up frenzy in nations with large numbers of angry unemployed young men.

Unfortunately, some of our government officials have taken the complaints about the video seriously. Before the attack, the Cairo embassy issued a statement condemning “the continuing efforts by misguided individuals to hurt the religious feelings of Muslims.”

When Mitt Romney condemned that statement, he was widely criticized by mainstream media. But his judgment was confirmed when Hillary Clinton and Barack Obama ordered the statement taken down.

Even so, White House press secretary Jay Carney said the protests were directed at the video rather than the United States — wishful thinking. The Hollywood Reporter revealed that the FBI was sent to Los Angeles to track down the video maker. The Los Angeles Times reported that the State Department asked YouTube whether the offending video violated its terms of service.

As Fox News commentator Kirsten Powers wrote, “Our leaders shouldn’t let our enemies know that when they kill our people and attack our embassies that the U.S. government will act like a battered wife making excuses for her psychotic husband.”

It’s also disturbing that Obama, after his brief statement deploring the Benghazi murders (and not mentioning the attack on the Cairo embassy), immediately embarked on a four-hour plane ride to campaign in Las Vegas.

In an interview there with Telemundo, Obama said Egypt was neither an ally nor an enemy. Later, the State Department spokesman conceded that Egypt is officially an ally under a 1989 law.

That’s an unforced error for an incumbent president, one who has criticized his opponent’s lack of foreign policy experience.

But perhaps it’s not surprising. American Enterprise Institute’s Marc Thiessen revealed last week that Obama has skipped more than half of his daily intelligence briefings. He reads the reports instead. His last in-person briefing before 9/11/12 was on Sept. 5.

It’s not clear why security efforts failed in Benghazi and the Libyan government’s assurances that it will protect our diplomats in the future seems sincere.

And Obama did find time for a reportedly “tense” phone conversation with Egyptian President Mohammed Morsi, who then made a public statement denouncing the attacks. But on the phone, Morsi reportedly asked Obama to “put an end to such behavior” — i.e., suppress the video. Did the president explain that we have a First Amendment that prevents government from doing such things?

Under settled principles of international law, attacks on diplomats by, or permitted by, governments can be considered acts of war. The threat of such attacks deserves a more stern response than a campaign trip to Vegas, a misstatement of settled policy and skipped intelligence briefings.