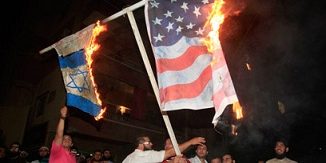 Supporters of the Shi’ite terrorist group Hezbollah are set to hit the streets of Beirut on Monday after its leader Sayyed Hassan Nasrallah called for protests against a film that portrays the Prophet Mohammad as a womanizer and a fool.

Lebanon has already seen protests over the Internet video in the mainly Sunni Muslim city of Tripoli. One person was killed and 14 wounded in clashes with security forces on Friday after protesters set fire to a US fast food restaurant.

Nasrallah, who heads the largest armed force in Lebanon, has the ability to muster huge numbers of Shi’ite Muslims in the Mediterranean state of 4 million people.

Days of anti-American violence provoked by the amateurish video, produced in California, have put Western embassies across the Muslim world on high alert. Protests have erupted from London to Lahore.

“We call for protests tomorrow in the southern suburbs (of Beirut) at 5 o’clock (1400 GMT),” Nasrallah said in a televised speech late on Sunday evening.

“Muslims and Christians must remain vigilant in order to refrain from sliding towards strife. Those responsible for the film, starting with the US, must be held accountable.” “All these developments are being orchestrated by US intelligence,” he said. He accused Washington, which denies any involvement with the film, of using the pretext of freedom of speech to justify the continued availability of the film online.

Nasrallah, a powerful figure who has the backing of Shi’ite Iran, also called for demonstrations in other parts of Lebanon, including the southern coastal town of Tyre on Wednesday and the northern town of Hermel on Sunday.

The video, circulating on the Internet under several titles including “Innocence of Muslims”, shows the Prophet in a sexual act with a woman.

Many Muslims consider any depiction of the Prophet offensive.

The US ambassador to Libya, Christopher Stevens, and three other Americans were killed in Benghazi, Libya, last Tuesday in an attack on the US consulate that coincided with an upsurge of anger about the film.

At least nine people were killed in protests in several countries on Friday, yet protests largely subsided over the weekend.

After Stevens’ death, Hezbollah sent out a statement condemning the film as an “immoral act … of the highest degree” on Wednesday, but did not call for protests.

Pope Benedict left Lebanon on Sunday after a three-day visit, supported by Nasrallah, in which he urged Arab leaders to serve justice and peace.