The Temple Mount is in our Hands 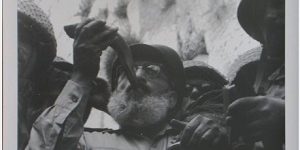 To read more fascinating and inspiring articles about the Shofar, please visit https://israel365.co.il/Home/RoshHashanah#

It was 1967 and Israel was confident that the year would pass without more war.  Egypt’s Nasser had poor relations with Jordan and besides, Egypt’s defeat at the hands of Israel in 1956 was an embarrassment still fresh in his mind.  However, it wasn’t long before tensions in the Middle East simmered and rose to a crescendo.  The Soviet government prodded Nasser to arm the Sinai and close the Straits of Tiran to Israeli shipping – it was May 23, 1967. The gauntlet was tossed and Nasser taunted Israel’s Chief of Staff, Yitzhak Rabin with the words, “Let him come, I’m waiting.”

Israel was fully mobilized and for three weeks sat with nerves taut to the point of shattering, waiting for word from its leaders.  Feeling very isolated in spite of vague words of commitment from the US and other allies, Israel determined to take the situation in hand and, as it turned out, Nasser wasn’t ready for Rabin after all.

On June 5, 1967 Israel launched a preemptive strike against Egypt, destroying their air force on the ground as its pilots were eating breakfast.  In a brief span of six days, the IDF took the entire Sinai Peninsula all the way to the Suez Canal in the south; the entire West Bank of the Jordan River on the east; and the Golan Heights to the north.  To top it off, the Old City of Jerusalem and the Temple Mount were finally restored to Jewish hands for the first time in two thousand years.

Paratroop Brigade commander Mordechai Gur led his troops through the ancient streets of Jerusalem’s Old City until finally arriving at Judaism’s holiest site. Broadcasted over the radio, he uttered the immortal words, “the Temple Mount is in our hands!” In the wake of his statement, Commander Gur accompanied Rabbi Shlomo Goren, chief rabbi of the Israel Defense Force, to the Western Wall.  Rabbi Goren dramatically raised a Shofar to his lips and blew a victory blasts that reverberated around the world.  The restoration of the Temple Mount to Jewish hands led many to believe that the time of the final redemption and the arrival of the Messiah was closer than ever.

Rabbi Goren knew the IDF’s mission the next day would be to take Hebron, the site of the Cave of Machpelah, which is the traditional burial site for Adam and Eve, Abraham and Sarah, Isaac and Rebecca, and Jacob and Leah.

Rabbi Goren intended to rise early to participate in the capture of Hebron but was left behind.  Believing the IDF had already arrived there, he had his driver speed to Hebron before the army had arrived only to find the city blanketed with white sheets draped from windows and roof-tops in a state of surrender. So, in effect, the Rabbi had captured the Biblical town of Hebron, a city with 80,000 Arabs, single-handedly.  He went to the Cave of the Patriarchs, blasted the doors open with his Uzi submachine gun, and blew the Shofar, just as he had done the previous day at the Western Wall.  For the first time in two thousand years, Jews once again had control over the resting spot of the Biblical Fathers and Mothers and the announcement of that victory came through the blasting of the Shofar.