What part of 'Iran will get the bomb if you don't stop it' Mr. President, don't you understand 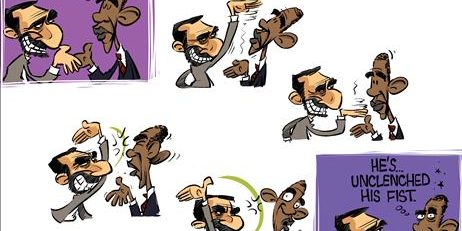 So now the crisis in relations between President Obama and the state of Israel has finally blown publicly open. On the very anniversary of 9/11, the day when America learned firsthand a little of what Israel has been living through for more than six decades after the enemies of civilization set out to murder as many people as possible in New York and Washington DC in order to destroy the US and the west, Obama has shown his anger at Israel’s Prime Minister Netanyahu by refusing to meet him when Netanyahu comes to the US at the end of the month to beg for decisive action to prevent a second attempted genocide of the Jews.

The reason for Obama’s ire? Netanyahu made a desperate statement earlier today which sharply — if obliquely — called the President to account. The reason for his desperation was that, after Israel had all but said it would refrain from attacking Iran’s nuclear plants if only the President would draw a ‘red line’ in negotiations by threatening force if they failed, Obama had refused on the risible grounds that, according to Hillary Clinton, negotiations were ‘ the best approach.’

‘The world tells Israel “wait, there’s still time”. And I say, “Wait for what? Wait until when?” Those in the international community who refuse to put red lines before Iran don’t have a moral right to place a red light before Israel,” Netanyahu told reporters on Tuesday.

The evidence of Israel’s desperation in suggesting that it may go it alone to bomb Iran’s nuclear sites lies in what it fears may result if it is forced to do so. Such an attack risks appalling consequences for Israel’s population, surrounded as it is on virtually all sides by Hezbollah’s rockets in the north, Hamas’s rockets in the south, and Syria’s rockets on the other side of the Golan heights – all backed by Iran – not to mention Iran’s own ballistic missiles.

Appalling as these consequences might be, however, a nuclear armed Iran, arguably the most significant terrorist state in the world and which regularly issues threats to annihilate Israel, would be a far worse prospect. If America were to join such an attack, however, the terrible risks to Israel would be lessened and the likelihood of destroying Iran’s nuclear program significantly higher.

So Netanyahu has resorted to talking over Obama’s head to the American people. Quite right—the American people should be made aware that, faced with arguably its most threatening enemy since Hitler, the Jewish people are being abandoned once again by an American president who, if returned to office for a second term, might deal an utterly fateful blow against the free world.

Se tell us, Mr President — since you are so angry with Israel’s PM, which bit of what he said, that you are providing Iran with the time it needs to finish building a nuclear weapon in order to carry out its declared aims of annihilating Israel and the west, did you think he got wrong?

US Department of State spokeswoman Victoria Nuland said today that that the US did not see public discussion of the Iranian nuclear program and any ‘red lines’ as helpful.

‘“We don’t think it’s particularly useful to have those conversations in public. It doesn’t help the process and it doesn’t help the integrity of the diplomacy. To be standing here at the podium parsing the details of the Iranian nuclear program is not helpful to getting where we want to go,” she said, briefing the media.

But the diplomacy isn’t going anywhere – except towards the creation of an Iranian nuclear bomb. And as for public rows being unhelpful, well the President could hardly deliver a more public snub than refusing to meet Netanyahu. After all, Obama could perfectly well have had a row with him in a private meeting.  The point of such a public snub – if it’s any more than a mere temper tantrum – is to signal to Iran that the US really does not ‘have Israel’s back’ at all. Unless this whole kerfuffle is one giant disinformation campaign (possible), it’s hard to think of a more treacherous thing to do.

Of course Netanyahu, who has been playing a desperate game of diplomatic poker with Obama for the past four years in order to protect Israel from this viscerally hostile President, is undoubtedly trying to alert US voters to the danger of electing this man for a further four-year term. In which case Obama has fallen neatly into the trap, by ensuring that this row gives this damaging accusation against himself the highest possible visibility.

Indeed, there is yet worse. For while the US snubs Israel, its sole ally in the Middle East against those who wish to destroy America and the west, America is about to roll out the red carpet for Iran’s President Ahmadinejad — whose country is in a state of self-declared war with America, kidnaps westerners, is behind numerous acts of terror against American and western interests, arms Hezbollah and Hamas, has been helping blow up American servicemen in Afghanistan  and Iraq, threatens the annihilation of Israel and is the greatest single threat to the peace of the world.

As Anne Bayefsky writes, next month Ahmadinejad will be welcomed to the United Nations in New York and there provided with a global platform from which to spout his poison – and thus strengthen Iran still further. What a difference from Canada, where the Harper government only last week severed all diplomatic ties with Iran in protest against its genocidal aims.

The moral bankruptcy of the club of terror that is the UN should need no further advertisement. But the American public should realize that their own Commander-in-Chief — and Democratic candidate for another four years as President — threatens to make their own great country complicit in another demented attempt to wipe out the Jews and after them, the west.

Sickeningly, faced with a deranged Judeophobic regime bent on genocide, the Jewish people finds itself at its moment of greatest danger, and despite the weasel words of support from the feeble and faithless allies on which it is forced to depend, once again where it really counts entirely alone.