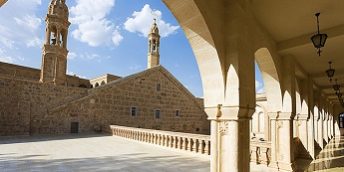 The shameful hooligans who vandalized the monastery at Latrun last week raised howls of protest worldwide. The ugly attack was covered extensively in just about every newspaper in the world, with a lot of buzz about the supposed brutalization of Israeli society and a radicalization of religious Jewry.

Without in any way meaning to trivialize or excuse the reprehensible attack, I take offense at the global response to the incident, for a number of reasons. Firstly, there is no sweeping brutalization or radicalization underway in Israeli society. Every responsible Israeli political and religious leader, including the chief rabbis, condemned the defacing of the monastery and apologized profusely in the name of Israel and Judaism. Certainly, no-one in Israel encourages such violence, either against Muslims or Christians. What’s more, 99.99 percent of religious Jews, including the most ultra-nationalist supporters of the settlement enterprise, view anti-Muslim or anti-Christian attacks as abhorrent desecrations of G-d’s name.

Secondly, despite a spate of recent so-called “price-tag” attacks (which will speedily come to an end when the police crack down on the fringe groups involved), Israel remains the standard-bearer for protection of all holy sites and religious groupings in this land, and it maintains freedom of worship for all.

Moreover, Israel is the only country in the Middle East where the number of Christians is rising (at about one percent per year, currently standing at 154,500, amounting to two% of the population). In fact, the past two decades have seen one of the most significant influxes of Christians into the Holy Land since the Crusades, and it has created a wholly new Christian landscape. For the first time, there is a significant population of non-Arab Christian-Israeli citizens, mainly immigrants from the former Soviet Union who, unlike Arabs, are fully assimilated into the Jewish-Israeli mainstream. There are many thousands of newly arrived Roman Catholics, Russian Orthodox, Ethiopian Orthodox, and other groups.

Christians in Israel have it good. The percentage of Christian Arabs who graduate high school is higher than that of Muslim or Jewish students, and more than 50% of Christian students proceed to study at Israeli universities (including more than 60 % of Christian-Arab women).

But you wouldn’t know this from last week’s media reports. Instead, you would likely have received the impression that Christians in Israel are under assault by the Jews.

What irks me even more is that few readers anywhere in the world would know from the Western media that Christians indeed are under fierce attack – from Arabs and Muslims across the Middle East, often with government encouragement and support.

The Gatestone Institute has been publishing an important online monthly report about Muslim persecution of Christians throughout Asia and Africa, and it makes for frightening reading. Even a brief summary of the litany of horrors being visited upon Christians by Muslims puts the accusations against Israel in perspective. Over the past half-year alone, repeated attacks on churches have occurred in Azerbaijan, Egypt, Gaza, Indonesia, Iraq, Kenya, Lebanon, Nigeria, Sudan, Syria, and Tunisia. Christians have been threatened with death and imprisonment for “blasphemy” and apostasy in Algeria, Bangladesh, Egypt, Iran and Pakistan.

The beleaguered Christian community in Lebanon lives painfully under the boot of Hezbollah. The Iraqi-Christian community has been reduced by many estimates from one million to half that number. An al-Qaida raid on a Baghdad cathedral last year resulted in the murder of 44 Christian worshipers and two priests.

The tiny Palestinian-Christian community in the Hamas-run Gaza strip is also under siege. According to the Greek Orthodox Church in Gaza, at least five Christians have been kidnapped and forced to convert to Islam in recent weeks. Archbishop Alexios, head of the Greek Church in Gaza, is spearheading protests against the persecution of Christians and forced conversions. The archbishop has come under sharp criticism from many Palestinians and the Hamas government for daring to speak out about the plight of his community. (Any foreign media interested in covering this story?)

Christians in Syria have fled by the tens of thousands. In March, Islamist militants went door to door in neighborhoods of Homs, expelling local Christians. Of the more than 80,000 Christians who lived in Homs prior to the uprising, approximately 400 remain today. In May, Christian residents of Qusayr received an ominous warning: Either join the Sunni-led opposition against Bashar Assad or leave. Soon after, thousands of Christians fled the town. Concern over the repression of Christians seems to have fallen on deaf ears, drowned out by popular support for the country’s opposition in the face of the Assad regime’s brutal crackdown.

At least 550 cases over the past five years have been documented in Egypt of abduction, torture, rape, enslavement or forced conversion to Islam – of Christians. Since March 2011, tens of thousands of Coptic Christians have reportedly left Egypt. Dozens of Copts have been killed in anti-Christian riots and churches have been burnt to the ground. On New Year’s Day 2011, a powerful car bomb targeted a Coptic church in Alexandria, killing 25 parishioners and wounding nearly 100 just as they were finishing midnight Mass. Flyers have been circulated calling for the total genocide of Egypt’s Christian Copts, and these flyers openly include names and mosque contact points for those Muslims who wish to collect their rewards for killing Christians.

According to the Egyptian website El Bashayer, Egypt’s new Muslim Brotherhood president Mohammed Morsi told a journalist (who interviewed him at the headquarters of the Brotherhood’s Freedom and Justice Party when he was running for office, on May 27) that the Copts “need to know that conquest is coming, and Egypt will be Islamic, and that they must pay jizya or emigrate.”

In Turkey, the existence of the oldest functioning Christian monastery in the world, the 5th century Mor Gabriel Monastery near the Turkish-Syrian border, is at risk after neighboring Muslims with the support of an MP member of the ruling AKP Party filed a lawsuit accusing the Christians of practicing “anti-Turkish activities” and of illegally occupying land which belongs to Muslim villages. Turkey’s highest appeals court ruled that the land that has been part of the monastery for 1,600 years is not its property, and even claimed that the monastery was built over the ruins of a mosque – even though Mohammed was born 170 years after the monastery was founded!

Just this weekend, Iran released Christian Pastor Youcef Nadarkhani after three years of imprisonment on charges of apostasy. He was arrested for converting to Christianity, for questioning the compulsory Islamic education of his children, and for seeking to register a home-based church. He was sentenced to death in 2010. Also this weekend, a Christian girl accused of insulting Islam in Pakistan was released on bail Saturday after spending three weeks in detention, in a case that renewed international criticism of the country’s strict blasphemy laws. Hundreds of Christians fled the Islamabad slum where she was arrested, after Muslim neighbors alleged that she had burnt pages containing Islamic inscriptions.

In short, the global media is quick to jump on Jewish hooliganism against Christians in Israel, but gives short shrift to the systematic, rampant, chronic and deadly persecution of Christians in the Arab and Islamic world.

Strangely, the U.S. State Department this year removed the sections covering religious freedom from its Country Reports on Human Rights. This means that the reports do not provide in-depth coverage of what has happened to Christians and other religious minorities over the course of the 2011-2012 Arab Spring upheavals.

While the administration has vocally condemned vandal attacks on mosques in the West Bank (where no Muslims died), it had nothing to say when Islamic terrorists bombed Nigerian churches on Easter Sunday, or when the Egyptian military opened fire on unarmed Christians for protesting the nonstop attacks on their churches. Responding to the Egyptian massacre, the White House spokesman said something like: “Now is a time for restraint on all sides.” He then went on to offer his hearty congratulations to the new Muslim Brotherhood president of Egypt.

In a similar hypocritical vein, Presbyterians in America and Canada have approved divestment campaigns targeting Jewish communities in the West Bank, but they have little to nothing to say about imprisoned pastors in Iran, Islamic acid-attacks on pastors in Uganda, the fire bombings of churches in Gaza, or the mass expulsion of Christians in Syria. I guess their silence can be explained by the fact that those Christians weren’t assaulted by Jews.

But again, in my opinion, the media gets the lion’s share of the blame for ignoring the persecution of Christians by Muslims. Instead, it is busy focusing on Israel’s misdemeanors. Just a few months ago, CBS’s Bob Simon produced a masterpiece of mistruth on “60 Minutes” in which he indicted Israel’s “occupation” and its security fence as the reason for the decline of the Christian population in the West Bank. What Simon doesn’t understand or want to understand, is that radical Islam, and not checkpoints or a security fence, remains the main threat to defenseless Christians not only in the Palestinians territories, but across the entire Middle East.

For the past half year, a 38-year-old evangelical pastor from Uganda named Umar Mulinde has been receiving emergency medical treatment at Israel’s Sheba Medical Center following an acid attack that severely burned his face and destroyed his right eye. Pastor Mulinde, who converted to Christianity and began teaching favorably about Israel after spending much of his life as a Muslim, was attacked on Christmas Eve in Kampala. The assailants shouted “Allah Akhbar” as they fled the scene. Since then, his wife and children have been threatened by Ugandan Islamists as well. Have you seen any significant international media coverage of this story?