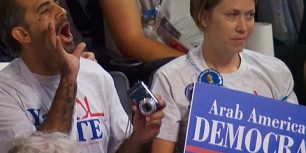 The Democratic platform once again acknowledges Jerusalem as the capital of Israel, but the reinstitution of the language in question (and the reinstituted reference to God) was more alarming than the initial change. When Los Angeles Mayor Antonio Villaraigosa called for Yeas and Nays on the decision he found a roughly even split among delegates. After repeating the process two more times, a befuddled Villaraigosa was visited on stage by a party official who seemingly advised him to declare the needed two-thirds in favor of the change regardless of what the delegates actually conveyed. This he promptly did, eliciting a wave of boos.

Let the paranoia begin. For the professional alarmists who see an all-powerful Israel lobby lurking behind every bush, rock, and cloud, today’s debacle is a goldmine. What could be a greater demonstration of the Israel Lobby’s dangerous subversion of American democracy than the sham vote at the Democratic National Convention that saw pro-Israel language shoved into the party platform over the heads of party delegates?

The reality of the situation, however, is both more interesting and more frightening than intrepid Zionist-spotters would have you believe. Today, America got an unvarnished look at the Democratic Party’s internal conflict on Israel. Half of the Party represents the pro-Israel consensus in America. The other half? Not so much. For all the talk about the unrecognizably extreme new Republican Party, it’s the Democrats whose fringe has quietly made deep inroads into the center—especially when it concerns Israel—and fundamentally altered the nature of the Party.

When Villaraigosa heard the split vote he looked like a performer suddenly forced to work off-script—because that’s exactly what he was. The Democratic script is composed of declarations about America’s special relationship with Israel, the continued U.S. commitment to Israeli security, and the unbreakable bonds that unite Israelis and Americans against common foes. Democratic politicians can rattle off those proclamations in their sleep. What the Israel-Lobby paranoids ignore is that it’s all meant to satisfy the majority American opinion of support for Israel, not appease some shifty cabal of wealthy bigots.

Today’s fiasco might do tremendous damage to Jewish support for Democrats but it will certainly open a new chapter in anti-Israel paranoia. The Democrats, including Barack Obama, will take hits coming and going: from Israel supporters whose eyes have been opened to the nature of the Democratic Party and from Israel bashers who see the Zionist hand behind the convention chaos. Such is the price paid for a party divided.